Giambattista (Gianbattista) Benedetti (August 14, 1530 in Venice – January 20, 1590 in Turin) was an Italian mathematician from Venice who was also interested in physics, mechanics, the construction of sundials, and the science of music. [1]

In his works Resolutio omnium Euclidis problematum (1553) and Demonstratio proportionum motuum localium (1554), Benedetti proposed a new doctrine of the speed of bodies in free fall. The accepted Aristotelian doctrine at that time was that the speed of a freely falling body is directly proportional to the total weight of the body and inversely proportional to the density of the medium. Benedetti's view was that the speed depends on just the difference between the specific gravity of the body and that of the medium. As opposed to the Aristotelian theory, his theory predicts that two objects of the same material but of different weights would fall at the same speed, and also that objects of different materials in a vacuum would fall at different though finite speeds. [1] [2]

In a second edition of the Demonstratio (also 1554), he extended this theory to include the effect of the resistance of the medium, which he said was proportional to the cross section or the surface area of the body. Thus two objects of the same material but of different surface areas would only fall at equal speeds in a vacuum. He repeated this version of his theory in his later Diversarum speculationum mathematicarum et physicarum liber (1585). In this work he explains his theory in terms of the then current theory of impetus. [1] [2]

It is thought that Galileo derived his initial theory of the speed of a freely falling body from his reading of Benedetti's works. Thus the account found in Galileo's De motu, his early work on the science of motion, follows Benedetti's initial theory as described above. It omits the later development which included the resistance of the medium and not just its density. In this early work, Galileo also subscribes to the theory of impetus. [3]

In 1572, the Jesuit Jean Taisner published from the press of Johann Birkmann of Cologne a work entitled Opusculum perpetua memoria dignissimum, de natura magnetis et ejus effectibus, Item de motu continuo. This is considered a piece of plagiarism, as Taisnier presents, as though his own, the Epistola de magnete of Peter of Maricourt and the second edition of Benedetti's Demonstratio. [4]

In a letter to Cipriano de Rore dated from around 1563, Benedetti proposed a new theory of the cause of consonance, arguing that since sound consists of air waves or vibrations, in the more consonant intervals the shorter, more frequent waves concurred with the longer, less frequent waves at regular intervals. Isaac Beeckman and Marin Mersenne both adopted this theory in the next century. In the same letter, he proposed a measure of consonance by taking the product of the numerator and the denominator of a rational interval in lowest terms. James Tenney also used this method to develop his measure of "harmonic distance" (log(ab) is the harmonic distance for the ratio b/a measured from an arbitrary tonal center 1/1). When they sought Descartes' opinion on Benedetti's theory, Descartes declined to judge the goodness of consonances by such a rational method. Descartes argued that the ear prefers one or another according to the musical context rather than because of any concordance of vibrations. [5]

A harmonic series is the sequence of sounds—pure tones, represented by sinusoidal waves—in which the frequency of each sound is an integer multiple of the fundamental, the lowest frequency.

Inertia is the resistance of any physical object to any change in its velocity. This includes changes to the object's speed, or direction of motion. An aspect of this property is the tendency of objects to keep moving in a straight line at a constant speed, when no forces act upon them.

Light or visible light is electromagnetic radiation within the portion of the electromagnetic spectrum that can be perceived by the human eye. Visible light is usually defined as having wavelengths in the range of 400–700 nanometers (nm), or 4.00 × 10−7 to 7.00 × 10−7 m, between the infrared and the ultraviolet. This wavelength means a frequency range of roughly 430–750 terahertz (THz).

Mechanics is the area of physics concerned with the motions of macroscopic objects. Forces applied to objects result in displacements, or changes of an object's position relative to its environment. This branch of physics has its origins in Ancient Greece with the writings of Aristotle and Archimedes. During the early modern period, scientists such as Galileo, Kepler, and Newton laid the foundation for what is now known as classical mechanics. It is a branch of classical physics that deals with particles that are either at rest or are moving with velocities significantly less than the speed of light. It can also be defined as a branch of science which deals with the motion of and forces on bodies not in the quantum realm. The field is today less widely understood in terms of quantum theory. 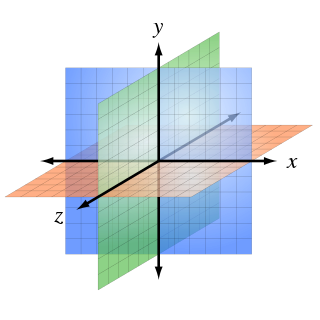 Space is the boundless three-dimensional extent in which objects and events have relative position and direction. Physical space is often conceived in three linear dimensions, although modern physicists usually consider it, with time, to be part of a boundless four-dimensional continuum known as spacetime. The concept of space is considered to be of fundamental importance to an understanding of the physical universe. However, disagreement continues between philosophers over whether it is itself an entity, a relationship between entities, or part of a conceptual framework. 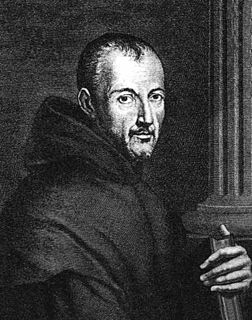 Marin Mersenne, Marin Mersennus or le PèreMersenne was a French polymath, whose works touched a wide variety of fields. He is perhaps best known today among mathematicians for Mersenne prime numbers, those which can be written in the form Mn = 2n − 1 for some integer n. He also developed Mersenne's laws, which describe the harmonics of a vibrating string, and his seminal work on music theory, Harmonie universelle, for which he is referred to as the "father of acoustics". Mersenne, an ordained priest, had many contacts in the scientific world and has been called "the center of the world of science and mathematics during the first half of the 1600s" and, because of his ability to make connections between people and ideas, "the post-box of Europe". He was also a member of the Minim religious order and wrote and lectured on theology and philosophy. 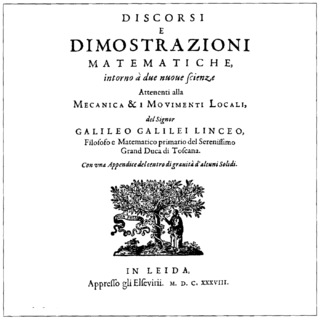 The Discourses and Mathematical Demonstrations Relating to Two New Sciences published in 1638 was Galileo's final book and a scientific testament covering much of his work in physics over the preceding thirty years.

Nicole Oresme, also known as Nicolas Oresme, Nicholas Oresme, or Nicolas d'Oresme, was a significant philosopher of the later Middle Ages. He wrote influential works on economics, mathematics, physics, astrology and astronomy, philosophy, and theology; was Bishop of Lisieux, a translator, a counselor of King Charles V of France, and probably one of the most original thinkers of 14th-century Europe.

John Philoponus, also known as John the Grammarian or John of Alexandria, was a Byzantine Alexandrian philologist, Aristotelian commentator and Christian theologian, author of a considerable number of philosophical treatises and theological works. A rigorous, sometimes polemical writer and an original thinker who was controversial in his own time, John Philoponus broke from the Aristotelian–Neoplatonic tradition, questioning methodology and eventually leading to empiricism in the natural sciences. He was one of the first to propose a "theory of impetus" similar to the modern concept of inertia over Aristotelian dynamics.

This article deals with the history of classical mechanics. 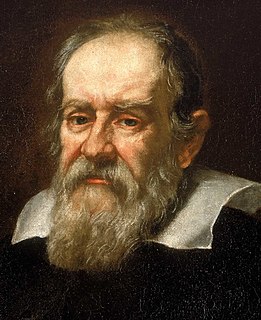 In physics, theories of gravitation postulate mechanisms of interaction governing the movements of bodies with mass. There have been numerous theories of gravitation since ancient times. Greek philosopher Aristotle believed that objects tend toward a point due to their inner gravitas (heaviness). Vitruvius understood that objects fall based on their specific gravity. In the 7th century, Brahmagupta spoke of gravity as an attractive force.

Aristotelian physics is the form of natural science described in the works of the Greek philosopher Aristotle (384–322 BCE). In his work Physics, Aristotle intended to establish general principles of change that govern all natural bodies, both living and inanimate, celestial and terrestrial – including all motion, quantitative change, qualitative change, and substantial change. To Aristotle, "physics" was a broad field that included subjects that would now be called the philosophy of mind, sensory experience, memory, anatomy and biology. It constitutes the foundation of the thought underlying many of his works. 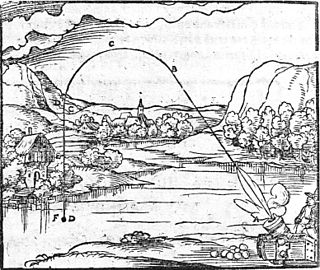 The theory of impetus was an auxiliary or secondary theory of Aristotelian dynamics, put forth initially to explain projectile motion against gravity. It was introduced by John Philoponus in the 6th century, and elaborated by Nur ad-Din al-Bitruji at the end of the 12th century. The theory was modified by Avicenna in the 11th century and Hibat Allah Abu'l-Barakat al-Baghdaadi in the 12th century, before it was later established in Western scientific thought by Jean Buridan in the 14th century. It is the intellectual precursor to the concepts of inertia, momentum and acceleration in classical mechanics.

Quaestiones quaedam philosophicae is the name given to a set of notes that Isaac Newton kept for himself during his earlier years in Cambridge. They concern questions in the natural philosophy of the day that interested him. Apart from the light it throws on the formation of his own agenda for research, the major interest in these notes is the documentation of the unaided development of the scientific method in the mind of Newton, whereby every question is put to experimental test.

The year 1554 CE in science and technology included a number of events, some of which are listed here.

De Motu Antiquiora, or simply De Motu, is Galileo Galilei's early written work on motion. It was written largely between 1589 and 1592, but was not published until 1687, after his death. It was never published during his lifetime due to a few uncertainties in his mathematics and certain parts of his understanding. Because it was never published during his life, he never composed a final draft. In the last parts of his work, the writing style changes from an essay to a dialogue between two people who strongly uphold his views.

Jacques-Alexandre Le Tenneur was a French mathematician who defended Galileo Galilei’s ideas. He corresponded with fellow mathematicians such as Pierre Gassendi, Pierre Hérigone and Marin Mersenne. It is unclear when or where he died but he probably lived from 1610 to 1660.