Giovanni Paisiello (or Paesiello; 9 May 1740 – 5 June 1816) was an Italian composer of the Classical era, and was the most popular opera composer of the late 1700s. His operatic style influenced Mozart and Rossini, and his music was championed by Haydn and Beethoven. [1] [ failed verification ]

Paisiello was born in Taranto in the Apulia region and educated by the Jesuits there. He became known for his beautiful singing voice and in 1754 was sent to the Conservatorio di S. Onofrio at Naples, where he studied under Francesco Durante, and eventually became assistant master. For the theatre of the Conservatorio, which he left in 1763, he wrote some intermezzi, one of which attracted so much notice that he was invited to write two operas, La Pupilla and Il Mondo al Rovescio, for Bologna, and a third, Il Marchese di Tidipano, for Rome. [2]

His reputation now firmly established, he settled for some years at Naples, where, despite the popularity of Niccolò Piccinni, Domenico Cimarosa and Pietro Guglielmi, of whose triumphs he was bitterly jealous, he produced a series of highly successful operas, one of which, L'ldolo cinese, made a deep impression upon the Neapolitan public. The young Mozart and his father met him in Bologna in 1771. [2]

In 1772 Paisiello began to write church music, and composed a requiem for Gennara di Borbone, of the reigning dynasty. In the same year he married Cecilia Pallini, and the marriage was a happy one. In 1776 Paisiello was invited by the empress Catherine the Great of Russia to Saint Petersburg, where he remained for eight years, producing, among other charming works, his masterpiece, Il barbiere di Siviglia , which soon attained a European reputation. The fate of this opera marks an epoch in the history of Italian art; for with it the gentle suavity cultivated by the masters of the 18th century died out to make room for the dazzling brilliance of a later period. [2]

When, in 1816, Gioachino Rossini set a revised version of the libretto to music, under the title of Almaviva ossia la inutil precauzione the fans of Paisiello stormed the stage. Rossini's opera, now known as Il barbiere di Siviglia , is now acknowledged as Rossini's greatest work, while Paisiello's opera is only infrequently produced—a strange instance of poetical vengeance, since Paisiello himself had many years previously endeavoured to eclipse the fame of Giovanni Battista Pergolesi by resetting the libretto of his famous intermezzo, La serva padrona .

Paisiello left Russia in 1784, and, after producing Il Re Teodoro at Vienna, entered the service of Ferdinand IV of Naples, where he composed many of his best operas, including Nina and La Molinara. [2] The English tenor Michael Kelly witnessed another meeting between Paisiello and Mozart when he visited Vienna later that year. Mozart had just finished a string of piano concertos, K. 449 and 453, written for his pupil Barbara Ployer. When Ployer’s father arranged a performance at his summer estate in Döbling, Mozart wrote to his father, “Fräulein Babette will play her new concerto in G and I shall play the Quintet and then we’ll perform together the grand sonata for two pianos. I shall fetch Paisiello with my carriage for I want him to hear my compositions as well as my pupil.” After many vicissitudes, resulting from political and dynastic changes, he was invited to Paris (1802) by Napoleon, whose favor he had won five years previously by composing a march for the funeral of General Hoche. Napoleon treated him munificently, while cruelly neglecting two more famous composers, Luigi Cherubini and Étienne Méhul, to whom the new favorite transferred the hatred he had formerly borne to Cimarosa, Guglielmi and Piccinni. [2]

Paisiello conducted the music of the court in the Tuileries with a stipend of 10,000 francs and 4,800 for lodging, but he entirely failed to conciliate the Parisian public, who received his opera Proserpine so coldly that, in 1803, he requested and with some difficulty obtained permission to return to Italy, upon the plea of his wife's ill health. On his arrival at Naples Paisiello was reinstated in his former appointments by Joseph Bonaparte and Joachim Murat, but he had taxed his genius beyond its strength, and was unable to meet the demands now made upon it for new ideas. His prospects, too, were precarious. The power of the Bonaparte family was tottering to its fall; and Paisiello's fortunes fell with it. The death of his wife in 1815 tried him severely. His health failed rapidly, and constitutional jealousy of the popularity of others was a source of worry and vexation. [2]

Paisiello is known to have composed 94 operas, which are known for their gracefully beautiful melodies. [2] Perhaps the best-known tune he ever wrote is "Nel cor più non mi sento" from La Molinara, immortalized when Beethoven composed variations based on it. Another favourite vocal piece is "Chi vuol la zingarella" from I zingari in fiera, that vividly portrays the scene of an attractive gypsy girl with its dramatic music. Paisiello also wrote a great deal of church music, including eight masses; as well as fifty-one instrumental compositions and many stand-alone songs. He also composed the Inno al Re, the national anthem of the Kingdom of the Two Sicilies. Manuscript scores of many of his operas were presented to the library of the British Museum by Domenico Dragonetti. [2]

The library of the Gerolamini at Naples possesses an interesting manuscript compilation recording Paisiello's opinions on contemporary composers, and exhibiting him as a somewhat severe critic, especially of the work of Pergolesi. [2]

The Grove Concise Dictionary of Music notes that "Paisiello was one of the most successful and influential opera composers of his time. Most of his over 80 operas are comic and use a simple, direct and spirited style, latterly with sharper characterization, more colorful scoring and warmer melodies (features that influenced Mozart). His serious operas have less than the conventional amount of virtuoso vocal writing; those for Russia are the closest to Gluck's 'reform' approach." [3]

Masses (other than those for rulers' chapels)

Pieces for the Mass Ordinary 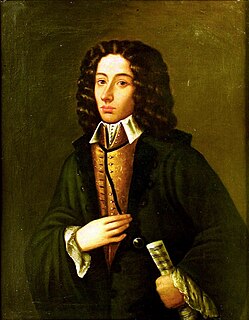 Giovanni Battista Draghi, often referred to as Giovanni Battista Pergolesi, was an Italian Baroque composer, violinist, and organist. His best-known works include his Stabat Mater and the opera La serva padrona. His compositions include operas and sacred music. He died of tuberculosis at the age of 26.

Theatres for diverse musical and dramatic presentations began to open in Naples, Italy, in the mid-16th century as part of the general Spanish cultural and political expansion into the kingdom of Naples, which had just become a vicerealm of Spain. None of the early theaters still function as such, having been replaced by later facilities from the mid-18th century onwards. Neapolitan theatres first built in the 16th and 17th centuries include: 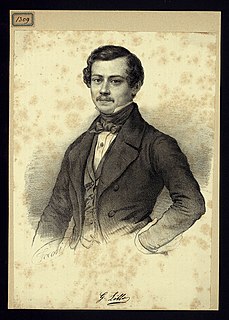 Carlo Franchi was an Italian opera composer known for his opere buffe. He belonged to the Neapolitan school of composers and it is likely that he was born in or near Naples, where his first opera La vedova capricciosa had its premiere in 1765. Subsequent works were performed in Rome, Venice, Mantua, Turin, Florence, and outside Italy in places such as Dresden and Lisbon.

Antonio Palomba (20 December 1705 – 1769) was an Italian opera librettist, poet, harpsichordist, and music educator. He also worked as a notary. Born in Naples, he became a teacher of the harpsichord at the Teatro della Pace in 1749. Most of his more than 50 opera libretti were comedic works written for composers of the Neapolitan school. He also wrote some works for performance in Florence, Bologna and abroad. He died in Naples in 1769; one of the victims of a fever epidemic in the city. Many of his libretti were set more than once to music, and composers continued to use his libretti up into the 1830s.

Michele Gabellone was an Italian composer best known for his operas.

Matteo Capranica was an Italian composer. Born in Amatrice, Capranica studied at the Conservatorio di Sant'Onofrio a Porta Capuana in Naples under Nicola Porpora, Ignazio Prota, and Francesco Feo. After completing his studies he worked as maestro di cappella at various churches in Naples and devoted himself to music composition of both sacred and secular works. He was for many years organist at the Naples Cathedral. His first opera, Carlo, premiered at the Teatro Nuovo in Naples in 1736. He went on to compose eight more operas through 1753. His other works include 2 oratorios, 2 masses, 2 sonatas, a cantata, several works for harpsichord, and various arias and duets for singers. He died in Naples.

Luigi Mosca was Italian composer of operas and sacred music and a noted singing teacher. He composed eighteen operas, most of which were originally for theatres in Naples, but played throughout Italy in their day.

Luigi Capotorti was an Italian composer of both sacred and secular music. He was the maestro di cappella of several Neapolitan churches; the composer of ten operas, five of which premiered at the Teatro San Carlo in Naples; and a teacher of composition and singing whose students included Stefano Pavesi and Saverio Mercadante. Born in Molfetta, he studied violin and composition at the Conservatorio di Sant'Onofrio in Naples and spent his entire career in that city. In his later years, Capotorti retired to San Severo, where he died at the age of 75.

Savino Monelli was an Italian tenor prominent in the opera houses of Italy from 1806 until 1830. Amongst the numerous roles he created in world premieres were Giannetto in Rossini's La gazza ladra, Enrico in Donizetti's L'ajo nell'imbarazzo and Nadir in Pacini's La schiava in Bagdad. He was born in Fermo where he initially studied music. After leaving the stage, he retired to Fermo and died there five years later at the age of 52.