Canon Giovanni Pietro Francesco Agius de Soldanis (Maltese : Ġan Piet Franġisk Agius de Soldanis, 30 October 1712 – 30 January 1770), often called de Soldanis (Maltese : Sultana), was a Maltese linguist, historian and cleric from the island of Gozo. He wrote the first lexicon and systematic grammar of the Maltese language, and he was the first librarian of the Bibliotheca Publica, the precursor of the National Library of Malta.

De Soldanis was born on 1 November 1712 in Rabat, Gozo, to Andrea agius and Valenzia Sultana. He was baptised in the Parish Church of St. George the following day. He was born Giovanni Pietro Francesco Agius, but he later added de Soldanis to his name, a Latinized version of his mother's surname Sultana, and he is now commonly known by that name. [1]

De Soldanis was privately educated by a Capuchin friar at the convent of Our Lady of Graces. He later studied literature, philosophy, theology and law at the Collegium Melitense in Valletta. De Soldanis was appointed canon of the Gozo Matrice by Bishop Paul Alphéran de Bussan in 1729, and he was ordained priest six years later in 1735. [2]

De Soldanis was interested in history, culture, archaeology and the Maltese language. He had an extensive library and a museum in his house, which contained various old coins and medals, inscriptions, pottery and statues. He wrote several manuscripts in a number of languages, including Maltese, Italian and French. He published some of his works in Rome, Naples, Venice and Avignon, but he never published anything in Malta since there was no printing press at the time. [1]

In 1753, he was appointed quaresimalista of Gozo, the official preacher of Advent and Lenten sermons at the Matrice, which was considered to be a position of privilege. Due to the influence of the bishop's brother, De Soldanis traveled throughout Italy and France in the 1750s. At this point, he studied at the University of Padua and graduated as a lawyer. [3] He also became a member of the Accademia degli Apatisti  [ it ] in Florence, the Accademia Botanica of Cortona, and the Accademia di Buongusto and the Accademia degli Erranti in Palermo. [2]

In 1758, de Soldanis returned to Gozo, but he moved to mainland Malta in 1763, when the knight Louis Guérin de Tencin chose him as the first librarian of the Bibliotheca Publica in Valletta, the precursor of the National Library of Malta. [2] [4]

De Soldanis' health began to deteriorate in 1768. He died on 30 January 1770, and he was buried at the Collegiate Parish Church of St Paul's Shipwreck in Valletta. [2]

Throughout his life, De Soldanis wrote a number of works about the Maltese language, which was his main area of interest. [5] He wrote the first grammar of the Maltese language in 1750, after he was informed that the Portuguese knight Almeida wanted such a grammar to be published. The book was entitled Della Lingua Punica presentemente usata da Maltesi, ovvero Nuovi Documenti li quali possono servire di lume all'antica Lingua Etrusca, stesi in due dissertazioni, and it was published in Rome. [2] In this work, de Soldanis hypothesizes that Maltese originates from the Punic language which he thought descended from the Etruscan language. This hypothesis was later disproven, and Maltese is now regarded as descended from Siculo-Arabic. [6]

From 1750 to 1762, de Soldanis worked on a second grammar entitled Nuova Scuola della Lingua Punica, but it was never published. [3] He also wrote a four-volume Maltese-Latin-Italian dictionary entitled Damma tal-Kliem Kartaginis mscerred fel fomm tal Maltin u Ghaucin between 1750 and 1767. [2] Although it also remained unpublished, this is regarded as his most influential work about the Maltese language, since it presents a unique picture of mid-18th century Maltese. [7]

Apart from studies on the Maltese language, de Soldanis also wrote works relating to history, archaeology and other topics related to Malta and Gozo. His magnum opus is Il Gozo Antico-Moderno e Sacro-Profano, a two-volume manuscript dealing with the history of Gozo completed in 1746. The manuscript served as the basis for further studies on Gozo, [5] but it remained unpublished until 1936, when the Government Press published a translation in Maltese by Giuseppe Farrugia Gioioso. A translation in English by Anthony Mercieca was published in 1999. [2]

In 1751, de Soldanis published Mustafà Bassà di Rodi schiavo in Malta, o sia la di lui congiura all'occupazione di Malta descritta da Michele Acciard, dealing with the Conspiracy of the Slaves which had occurred two years earlier. This book landed him in trouble with Grand Master Manuel Pinto da Fonseca, since in it he attacked the Order of St. John and argued for the rights of the Maltese. De Soldanis had to go to Rome to defend himself in front of Pope Benedict XIV, but he returned to Malta in 1752 and was forgiven by Pinto. [1]

De Soldanis also wrote a series of dialogues, which are now regarded as having linguistic and socio-cultural importance. [8]

Many of De Soldanis' works and manuscripts are now found at the National Library of Malta. [1]

Agius de Soldanis Girls' Junior Lyceum and Secondary School in Victoria, Gozo, the only girls' school in Gozo and one of the largest schools in Malta, is named after de Soldanis. [9] His bust is found in Villa Rundle Gardens in Victoria. [10]

The 300th anniversary of de Soldanis' birth was celebrated in 2012 with exhibitions and other events in Victoria and Valletta. [5] A plaque in his honour was unveiled at St. George's Square, Victoria in 2013. [11] 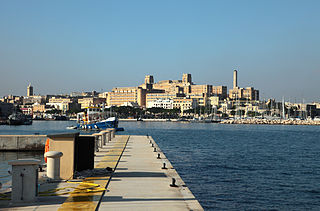 Victoria, also known among the native Maltese as Rabat or by its title Città Victoria, is an administrative unit of Malta, the largest and most prominent city of Gozo,. Victoria has a total population of 6,901, and by population, is the largest locality in Gozo. 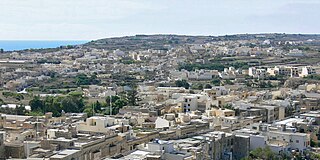 Kerċem is an administrative unit of Malta, on the island of Gozo, with a population of 1,938 people as of March 2014.

Mikiel Anton Vassalli was a Maltese writer, a philosopher, and a linguist who published important Maltese language books, including a Maltese-Italian dictionary, a Maltese grammar book, the first Protestant Gospels in Maltese, and towards the end of his life, a book on Maltese proverbs.

Gioacchino Navarro was a Maltese priest and poet who was the Conventual Chaplain of the Order of St. John. He studied both Latin and Greek, and he also spoke Italian, Maltese, English and Arabic. He was the librarian of the National Library of Malta for forty years, after succeeding Giovanni Pietro Francesco Agius de Soldanis in 1770.

The Castellania, also known as the Castellania Palace, is a former courthouse and prison in Valletta, Malta. It was built by the Order of St. John between 1757 and 1760, on the site of an earlier courthouse which had been built in 1572. 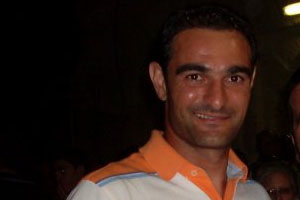 The National Library of Malta, often known as the Bibliotheca, is a reference library in Republic Square, Valletta, Malta. It was founded by Grand Master Emmanuel de Rohan-Polduc in 1776 out of the collections of the knight Louis Guérin de Tencin. It has been a legal deposit library since 1925, and it has the largest collection of Melitensia along with that of the University of Malta. The library also contains the archives of the Order of St. John, the Università of Mdina and the Università of Valletta.

Anastastio Cuschieri (1876–1962) was a Maltese poet, politician, and minor philosopher. He held the Chair of Philosophy at the University of Malta (1901–39). In philosophy he was mostly interested in ethics.

The Auberge d'Italie is an auberge in Valletta, Malta. It was built at various stages in the late 16th century to house knights of the Order of Saint John from the langue of Italy, and it originally had a Mannerist design by Girolamo Cassar and several other architects. The building continued to be modified throughout the course of the 17th century, with the last major renovation being carried out in the 1680s during the magistracy of Gregorio Carafa, giving the building a Baroque character.

The Conspiracy of the Slaves was a failed plot by Muslim slaves in Hospitaller-ruled Malta to rebel, assassinate Grand Master Manuel Pinto da Fonseca and take over the island. The revolt was to have taken place on 29 June 1749, but plans were leaked to the order before it began; the plotters were arrested and most were later executed. 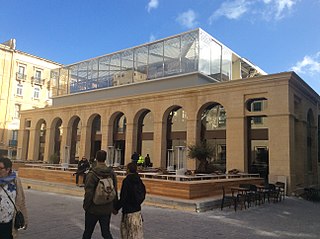 Is-Suq tal-Belt, also known as the Covered Market, is a 19th-century market hall located in Valletta, Malta. It is notable for being the first building in Malta to be constructed mostly of iron. The building was severely damaged in World War II, and the rebuilding was insensitive to the original structure. Further alterations were made in later decades, and the market began to decline in the 1970s. An attempt to rebrand it as a shopping arcade known as Ixtri Malti in the 1980s was unsuccessful. The market continued to decline until it was renovated in 2016–17, and reopened as a food market in January 2018.

Carlo Gimach was a Maltese architect, engineer and poet who was active in the late 17th and early 18th centuries. Throughout his career, he worked in Malta, Portugal and Rome, and he is mostly known for designing Palazzo Carneiro in Valletta, renovating the Monastery of Arouca in Portugal, and restoring the Basilica of St. Anastasia in Rome. He is known to have written a number of poems and other literary works, but these are all lost with the exception of one cantata which he wrote in 1714.

Seismic risk in Malta is considered to be low with little historic damage noted and no known victims. The archipelago is however in a potentially significant seismic zone and the risk to the population is probably undervalued. 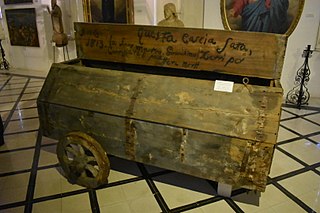 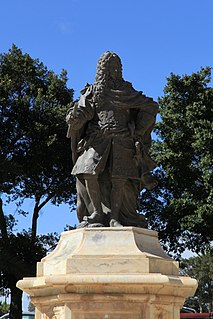 The statue of António Manoel de Vilhena is a life-sized Baroque bronze statue of António Manoel de Vilhena, a Portuguese Grand Master of the Order of St John. Commissioned in 1734 by the knight Felician de Savasse, it was sculpted by Pietro Paolo Troisi and cast by Aloisio Bouchut. In 1736 it was installed at Fort Manoel in Malta, and it was subsequently relocated a number of times. It was moved to Piazza Tesoreria in Valletta in 1858, to the entrance of The Mall gardens in Floriana in 1891, and to its present location at Pope John XXIII Square in Floriana in 1989.

The Għar Għerduf catacombs at Ta' Kerċem, also known as Għar Gerduf, are the only surviving early Christian catacombs or paleochristian hypogea in Gozo, Malta. Għar Għerduf is a unique Roman burial site in Gozo, which has for centuries attracted the attention of scholars interested in Maltese archaeology. The site was visited by erudite visitors who often included a description of the place as they did for Ġgantija and the Xagħra Stone Circle.