Giri choco (義理チョコ, lit. "obligation chocolate") is chocolate given by women to men on Valentine's Day in Japan as a customary gift. Unlike honmei choco , which is given to romantic partners, giri choco is a type of chocolate that women give to male co-workers, bosses, and acquaintances out of appreciation and politeness. Men generally reciprocate by giving women gifts on White Day, which is celebrated on March 14.

On Valentine's Day in Japan, giri choco is inexpensive chocolate that women give to male co-workers and friends to show appreciation and respect as opposed to honmei choco , chocolate that is given to romantic partners. [1] While Japan has a strong gift-giving culture, [1] the origins of giving chocolate on Valentine's Day is unclear. [2] One popular explanation is that the trend was started by junior high school girls, who would give handmade chocolate to boys to see if they returned their affections, [3] and it later became commercialized in the mid-1950s, [4] with the first Valentine's sale taking place in 1958 at Mary Chocolate. [2]

Harumichi Yamada from Tokyo Keizai University stated that the practice of giving chocolate occurred because women expressing their love to men was considered disgraceful, and confectioneries capitalized on chocolate as a way for them to profess their love; however, as the social status of women improved, Valentine's Day was later considered a day where women give chocolate to men, through which the giri choco custom emerged. [5] Sachiko Horiguchi from Temple University, Japan Campus suggested that the giri choco custom first occurred in the 1980s where working women were obligated to give chocolate to their co-workers and bosses, as both of the Japanese corporate and gift-giving cultures made it appropriate for this exchange to take place. [6]

In the 1980s, White Day began as a tradition where men would reciprocate giri choco gifts in order to boost sales. [4] White Day gift sales are heavily influenced by sales from Valentine's Day. [8] [9]

The tradition of giving giri choco is losing popularity in Japan beginning in the late 2010s and is criticized for pressuring women to buy chocolate for their co-workers to avoid offending them. [1] [4] Some companies have banned the practice, citing it as power harassment. [4] Instead, women opt to give friendship chocolate (友チョコ, tomo choco) to their friends. [1] [10] A 2017 survey from 3M showed that only 40% of the women surveyed planned to give chocolate to their male co-workers, [1] compared to 80% in a 2007 survey conducted by a different company. [2] In 2018, Godiva Chocolatier also criticized the practice of giving giri choco with a full-page advertisement, calling for workplaces to ban it entirely, though some critics have accused them of stealth marketing. [5] [8] [11]

White Day is on March 14, one month after Valentine's Day, when people give reciprocal gifts to those who gave them gifts received on Valentine's Day. It began in Japan in 1978; since then, its observance has spread to several other Asian nations.

Cornetto, meaning "little horn" in Italian, is an Italian brand of frozen dessert cone, the manufacturer owned by the British-Dutch company Unilever. It that's international subsidiary names of brand, including Algida in Italy, Wall's in the UK, HB in the Republic of Ireland, Frigo in Spain, Kwality Wall's in India, and others. Several variations of the product exist, ranging from milk-based ice cream to vegetable fat-based dessert.

Godiva Chocolatier is an American chocolate maker which is jointly owned by Turkish conglomerate Yıldız Holding and MBK Partners.

Sweethearts are small heart-shaped sugar candies sold around Valentine's Day. Each heart is printed with a message such as "Be Mine", "Kiss Me", "Call Me", "Let's Get Busy", or "Miss You". Sweethearts were made by the New England Confectionery Company, or Necco, before being purchased by the Spangler Candy Company in 2018. They were also previously made by the Stark Candy Company. Necco manufactured nearly 8 billion Sweethearts per year. Similar products are available from Brach's and other companies. A similar type of candy is sold in the UK under the name Love Hearts. 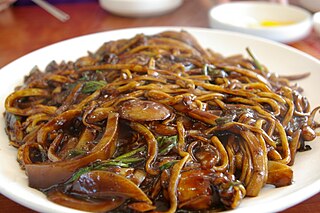 Black Day is an unofficial holiday observed on April 14 each year. It is mostly observed in South Korea by singles.

The code of etiquette in Japan governs the expectations of social behavior in the country and is considered very important. Like many social cultures, etiquette varies greatly depending on one's status relative to the person in question. Many books instruct readers on its minutiae. Some conventions may be very regional practices, and thus may not exist in all regions of Japan. Some customs have changed over the course of Japanese history. The following are generally accepted modern customs in Japan.

Andes Chocolate Mints are small rectangular candies consisting of one mint-green layer sandwiched in between two chocolate-brown layers. The candies are usually wrapped in green foil and imprinted with the company's logo, the word Andes written amidst a drawing of snow-capped peaks. First launched in 1950, they are produced by Tootsie Roll Industries and made in Delavan, Wisconsin.

Orion Corporation is a South Korean confectionery company, headquartered in Munbae-dong, Yongsan District, Seoul. The company is one of the three largest food companies in South Korea, and was established in 1956 as Tongyang Confectionery Corp. Orion has manufacturing facilities in Seoul, Cheonan Chungcheongnam-do and cities in China, Russia, Vietnam, and the United States. Products produced by Orion include biscuits, cookies, crackers, pies, gum, snacks, chocolate, and candy; and its most famous product is Choco Pie. Its competitors include Crown Confectionery and Lotte Confectionery. Orion was the parent company of the entertainment company On-Media, until its acquisition by the CJ Group in 2010.

Morinaga & Company, Ltd. is a confectionery company in Tokyo, Japan, in operation since 1899. Their products include candy and other confectioneries. Morinaga has had Ayumi Hamasaki and Mao Asada appear in their commercials, and in the past has used stars such as the Carpenters to advertise their products.

Giri (義理) is a Japanese value roughly corresponding to "duty", "obligation", or even "burden of obligation" in English. It is defined as "to serve one's superiors with a self-sacrificing devotion" by Namiko Abe. It is also associated with the complex Japanese values that involve loyalty, gratitude, and moral debt. This value is so integral to Japanese culture that the conflict between giri and ninjō, or "human feeling", is said to have been the primary topic of Japanese drama since earlier periods in history.

A choco pie is a snack cake consisting of two small round layers of cake with marshmallow filling and a chocolate covering. The term originated in America but is now also used widely in South Korea, Japan, and its exports, and many other countries as either a brand name or a generic term. Names for similar confections in other places include chocolate marshmallow pie, Wagon Wheels, the Japanese angel pie, Jos Louis, and moon pie. Contrary to popular belief in South Korea, there were many other similar snacks to the Choco Pie long before the Korean Choco Pie was sold, such as the British Wagon Wheels and the Japanese Angel Pie among many others.

Morozoff Limited is a confectionery and cake company headquartered in Kobe, Japan. Since its founding in 1931 by Fedor Dmitrievich Morozoff, a white emigre from Russia, Morozoff has grown and now has 952 restaurants and cafes across Japan.

Honmei choco in Japan is chocolate given by women on Valentine's Day to men whom the giver has romantic feelings for. This is often given to husbands, boyfriends, and desired partners. Honmei chocolate is usually higher-quality and more expensive than giri choco, which is given to male coworkers and other men the woman has no romantic attachment to. 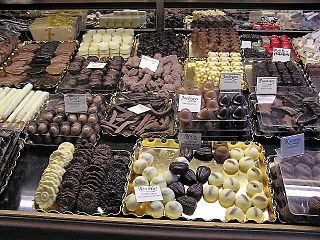 Belgian chocolate is chocolate produced in Belgium. A major industry since the 19th century, today it forms an important part of the nation's economy and culture. 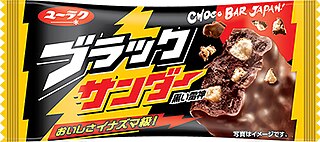 Black Thunder is a chocolate bar made and sold in Japan by the Yuraku Confectionery Company. It contains a cocoa-flavored cookie bar mixed with Japanese-style rice puffs, coated with chocolate. The manufacturer's suggested retail price is ¥30, before tax. The main advertising slogan translates to "Delicious taste in a flash of lightning!" The story of the Yuraku Confectionery Company and its Black Thunder bar has been treated in the Japanese business press as something of a modern-day rags to riches story.

Tokyo Connection is the first concept album and first mini-album by the female Japanese hip-hop unit Halcali. This album is described as a "sequel" to Tokyo Groove of the previous year, hence the title. 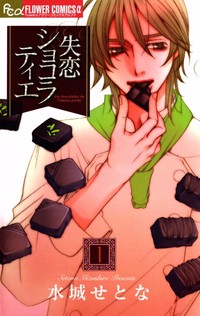 Shitsuren Chocolatier, also known as Un chocolatier de l'amour perdu, is a Japanese manga series written and illustrated by Setona Mizushiro. It was serialized in Shogakukan's Rinka magazine starting in 2008, moving to Monthly Flowers magazine in 2010 where it completed its serialization in 2014. Shogakukan collected the individual chapters into nine bound volumes from January 2009 to February 2015. The manga was also adapted into a live-action Japanese television drama starring Arashi's Jun Matsumoto in the lead role. It aired for eleven episodes on Fuji TV from January to March 2014.

Ruby chocolate is a variety of chocolate introduced in 2017 by Barry Callebaut, a Belgian–Swiss cocoa company. The variety has been in development since 2004 and in 2015, the product was patented by Dumarche et al. credited as inventors and Barry Callebaut as assignee under patent number US 9107430, 2015. It was unveiled at a private event in Shanghai on 5 September, 2017. It is marketed as the "fourth" type of chocolate alongside dark, milk, and white chocolate varieties and is notable for its natural pink colour.