Joenette Giselle Ife Salandy ORTT (25 January 1987 – 4 January 2009) was a Trinidadian professional boxer. She was an undefeated unified light middleweight world champion, holding the WBA and WBC, as well as the IWBF, WIBA, WIBF, and GBU female titles, from 2006 until her death in 2009.

Joenette Giselle Ife Salandy was born on 25 January 1987 in Siparia [1] in southern Trinidad. Her mother Maureen died [2] when Giselle was 11 years old. She then resided with Ivy Corian who raised her until she was 14 years old. She attended St. Bridgid's Girls' RC School, Penal Junior Secondary School and then Fyzabad Composite School. She had two siblings, Josanne and Joel. [2]

At the age of eleven years, nursing a broken arm, Giselle visited the White Eagles Gym with her stepbrother Joel Eligon and started punching a punching bag. [2] She was immediately recognized by the trainers in the gym, Kim 'Bone Crusher' Quashie and Fitzroy Richards. [2] Giselle thereafter got involved in the sport. She made her professional debut at 13 years of age, under coach/manager, Fitzroy Richards. She picked up a series of six victory fights throughout Trinidad and Tobago and the islands of Tortola and Anguilla, with opponents such as Johanna Peña-Álvarez and Ria Ramnarine. [3]

After six fights under coach/manager, Fitzroy Richards, Salandy changed manager to her adopted father, Curtis Joseph and trainer to Joseph "Black Mamba" Charles, a former boxer. Thereafter she could not have boxed because the law of Trinidad and Tobago stated a person under the age of 17 cannot obtain a professional boxing license, thus causing her boxing career to come to a temporary halt.

Five days after her 17th birthday, Giselle returned to the ring in Chaguanas and successfully defended her IBERO Title against Paola Rojas on a card co-promoted by Curtis Joseph, Boxu Potts and Cecil Ford. After that fight her manager, Curtis Joseph, failed to secure fights for her causing her boxing career to come to a halt again. Boxu Potts privately contacted her about a show he was promoting. Salandy then pressured Curtis Joseph into allowing her to represent her country by fighting on Potts' T&T vs. US boxing card.

At age 18, on 23 September 2005, on the T&T vs. US boxing card, promoted by Boxu Potts, Salandy fought and defeated Manela Daniels, breaking a second world record by becoming the youngest female in the world to win the NABC World Title. However, again, manager Curtis Joseph was unable to secure fights for her. She became frustrated with this and severed her work relationship with Curtis Joseph. Shortly after, Salandy and Kim Quashie contacted Boxu Potts to take over managing her career.

Salandy fought Manela Daniels at the Petrotrin Grounds in Fyzabad, a fight she had previously booked, which was promoted by Arthur Sanderson. Salandy then signed a promotional contract with Potts and left her Fyzabad home and went to live with Potts and his family at their Arima home while Miller was in training camp in Ghana.

On 15 March 2008 super middleweight Natascha Ragosina broke Salandy's record by winning seven belts in one fight. However, only two weeks later at the Centre of Excellence in Trinidad and Tobago, Salandy fought and defeated the then unbeaten Karolina Lukasik in her mandatory defense, regaining her world record by winning eight title belts in one fight. [ citation needed ] These title belts were: WBC, WBA, WBE, WIBA, IWBF, WIBF, GBU and UBC.[ citation needed ]

Again on 26 December 2008, Salandy fought and defeated the fourth ranked Yahaira Hernandez, securing her eight title belts and breaking a Caribbean record by being the first boxer in the history of the Caribbean to successfully defend all her world titles six consecutive times.

On 31 August 2009 Salandy was posthumously awarded Trinidad's highest national award, the Order of the Republic of Trinidad and Tobago. Salandy was the first boxer in the history of the Caribbean to ever receive such an award. [2]

Salandy died in a motor vehicle collision on the morning of 4 January 2009, crashing her vehicle into a concrete pillar while driving west into Port of Spain on the Beetham Highway. She succumbed to her injuries at around 8:29 a.m. [1] She was 21 years old. [2] The other occupant of the vehicle, national footballer Tamar Watson, was admitted to hospital in critical condition, having suffered massive internal injuries and broken limbs.

Salandy was given a state funeral.

Relatives of Salandy questioned why she was allowed to drive herself on Sunday, as she had a driver was assigned to her. [6] Salandy, who held a driver's permit for the last two years, hired a 21-year-old man to be her driver because of her hectic schedule. Boxu Potts dispelled rumours that the driver abandoned his job, and claimed it was Salandy's decision to drive herself, and her cousin stressed that no one was to blame for the accident. 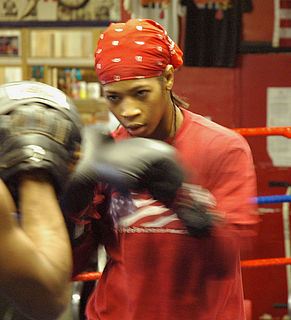 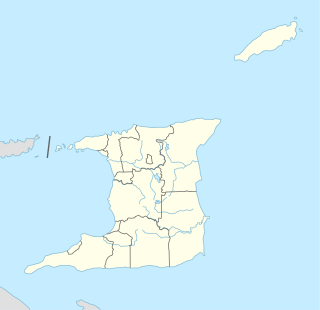 Siparia is a town in southern Trinidad, in Trinidad and Tobago, south of Penal and southeast of Fyzabad. Also called "The Sand City", it was originally a non-Mission Amerindian settlement. Siparia grew to be the administrative centre for Saint Patrick County, and later the Siparia Regional Corporation. Today it is a commercial centre and market town serving the surrounding agricultural areas and oil fields. Siparia is also the seat of the Siparia Regional Corporation.

The Women's International Boxing Association (WIBA) a sanctioning body for women's professional boxing came into existence in July 2000, and quickly grew into a major force in the sport.

Johanna Peña-Álvarez is a Dominican former professional boxer who competed from 2000 to 2004. She challenged once for the WIBF flyweight title in 2004.

Jeannine Garside is a Canadian former professional boxer who competed from 2004 to 2010. She was a two-weight world champion, having held the WIBA super bantamweight title from 2005 to 2006; the WIBA featherweight title twice between 2006 and 2010; and the unified WBC, and WBO female featherweight titles in 2010.

Susianna "Susi" Levonovna Kentikian is an Armenian-German professional boxer. She was born in Yerevan, Armenian SSR, but left the country with her family at the age of five because of the Nagorno-Karabakh War. Kentikian has lived in Hamburg since 1996 and began boxing at the age of twelve. Following a successful amateur career, she turned professional in 2005 upon signing with the Hamburg-based Spotlight Boxing promotion. 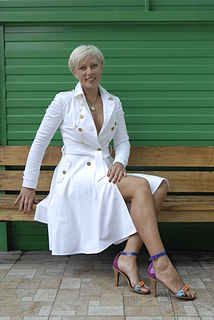 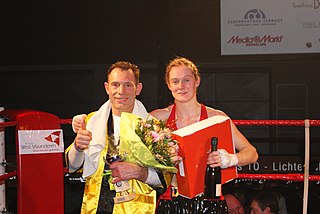 Mary Ann Almager is an American former professional female boxer. Born in Seminole, Texas, she is a resident of Ruidoso, New Mexico. Her nickname is "Gorgeous".

Nikki Adler is a German professional boxer of Croatian descent. She held the WBC female super-middleweight title from 2013 to 2017.