Gladys May Aylward (24 February 1902 – 3 January 1970) was a British-born evangelical Christian missionary to China, whose story was told in the book The Small Woman, by Alan Burgess, published in 1957, and made into the film The Inn of the Sixth Happiness , starring Ingrid Bergman, in 1958. The film was produced by Twentieth Century Fox, and filmed entirely in North Wales and England. [1]

Aylward was born in 1902, one of three children to Thomas John Aylward and Rosina Florence (née Whiskin); a working-class family from Edmonton, North London. [2] From her early teens, Gladys worked as a domestic worker (housemaid). Following a calling to go overseas as a Christian missionary, she was accepted by the China Inland Mission to study a preliminary three-month course for aspiring missionaries. Due to her lack of progress in learning the Chinese language she was not offered further training. [3]

On 15 October 1932, having worked for Sir Francis Younghusband, [4] Aylward spent her life savings on a train passage to Yangcheng, Shanxi Province, China. The perilous trip took her across Siberia with the Trans-Siberian Railway. She was detained by the Russians, but managed to evade them with local help and a lift from a Japanese ship. She travelled across Japan with the help of the British Consul and took another ship to China.

On her arrival in China Yangcheng, Aylward worked with an older missionary, Jeannie Lawson, to found The Inn of the Eight Happinesses, [5] (八福客栈 bāfú kèzhàn in Chinese) the name based on the eight virtues: Love, Virtue, Gentleness, Tolerance, Loyalty, Truth, Beauty and Devotion. [6] There, she and Mrs. Lawson not only provided hospitality for travellers, but would also share stories about Jesus, in hopes of spreading nascent Christianity. For a time she served as an assistant to the Government of the Republic of China as a "foot inspector" by touring the countryside to enforce the new law against footbinding young Chinese girls. She met with much success in a field that had produced much resistance, including sometimes violence against the inspectors. [4]

Aylward became a national of the Republic of China in 1936 and was a revered figure among the people, taking in orphans and adopting several herself, intervening in a volatile prison riot and advocating prison reform, risking her life many times to help those in need. [7] In 1938, the region was invaded by Japanese forces and Aylward led more than 100 orphans to safety over the mountains, despite being wounded, personally caring for them (and converting many to Christianity).

She did not return to Britain until 1949, at which point her life in China was thought to be in great danger from the Communists - the army was actively seeking out missionaries. Settling in Basingstoke, she gave many lectures on her work. After her mother died, Aylward sought a return to China. After rejection by the Communist government and a stay in British administered Hong Kong, she finally settled in Taiwan in 1958. There, she founded the Gladys Aylward Orphanage, [8] where she worked until her death in 1970. [9]

The Inn of the Sixth Happiness

A film based on her life, The Inn of the Sixth Happiness , was released in 1958. It drew from the book The Small Woman, by Alan Burgess. Although she found herself a figure of international interest due to the popularity of the film, and television and media interviews, Aylward was mortified by her depiction in the film and the liberties it took.[ citation needed ] The tall (1.75m/5' 9"), blonde, Swedish actress Ingrid Bergman “Helen Lazell” was inconsistent with Aylward's small stature, dark hair and North London accent. The struggles of Aylward and her family to effect her initial trip to China were disregarded in favour of a movie plot device of an employer "condescending to write to 'his old friend' Jeannie Lawson." Also, Aylward's dangerous, complicated travels across Russia, China and Japan were reduced to, "a few rude soldiers", after which, "Hollywood's train delivered her neatly to Tientsin." [10] Many characters and place names were changed, even when these names had significant meaning, such as those of her adopted children and the name of the inn, named instead for the Chinese belief in the number 8 as being auspicious. For example, in real life she was given the Chinese name 艾偉德 (Ài Wěi Dé- a Chinese approximation to 'Aylward' – meaning 'Virtuous One'), however in the film she was given the name 真愛 Jen-Ai,( pronounced- Zhen-Ai, meaning "true love"). [11] Colonel Linnan was portrayed as half-European, a change which she found insulting to his real Chinese lineage, and she felt her reputation was damaged by the Hollywood-embellished love scenes in the film. Not only had she never kissed a man, but the film's ending portrayed her character leaving the orphans to re-join the colonel elsewhere, [12] even though in reality she did not retire from working with orphans until she was 60 years old. [13]

Aylward died on 3 January 1970, just short of her 68th birthday, and is buried in a small cemetery on the campus of Christ's College in Guandu, New Taipei, Taiwan. She was known to the Chinese as 艾偉德 (Ài Wěi Dé- a Chinese approximation to 'Aylward' – meaning 'Virtuous One').

A London secondary school, formerly known as "Weir Hall and Huxley", was renamed the Gladys Aylward School shortly after her death.

There is a blue commemorative plaque on the house where Gladys lived near the school at 67 Cheddington Road, London N18.

Numerous books, short stories and films have been developed about the life and work of Gladys Aylward.

Ingrid Bergman was a Swedish actress who starred in a variety of European and American films, television movies, and plays. She won many accolades, including three Academy Awards, two Primetime Emmy Awards, a Tony Award, four Golden Globe Awards, and a BAFTA Award. 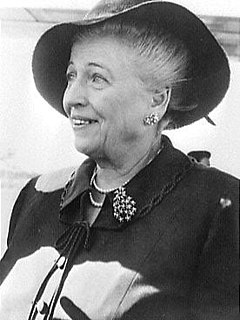 Pearl Sydenstricker Buck was an American writer and novelist. As the daughter of missionaries, Buck spent most of her life before 1934 in Zhenjiang, China. Her novel The Good Earth was the best-selling fiction book in the United States in 1931 and 1932 and won the Pulitzer Prize in 1932. In 1938, she was awarded the Nobel Prize in Literature "for her rich and truly epic descriptions of peasant life in China and for her biographical masterpieces". She was the first American woman to win the Nobel Prize for Literature. 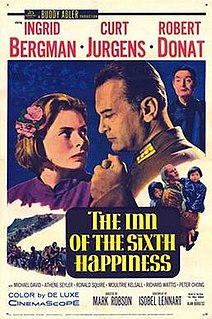 The Inn of the Sixth Happiness is a 1958 20th Century Fox film based on the true story of Gladys Aylward, a tenacious British woman, who became a missionary in China during the tumultuous years leading up to the Second World War. Directed by Mark Robson, who received a nomination for the Academy Award for Best Director, the film stars Ingrid Bergman as Aylward and Curt Jürgens as her love interest, Captain Lin Nan, a Chinese officer with a Dutch father. Robert Donat, who played the mandarin of the town in which Aylward lived, died before the film was released. The musical score was composed and conducted by Malcolm Arnold. The cinematography was by Freddie Young.

Herbert Tsangtse Kwouk, OBE was a Chinese-English actor, known for his role as Cato in the Pink Panther films. He made appearances in many television programmes, including a portrayal of Imperial Japanese Army Major Yamauchi in the British drama series Tenko and as Entwistle in Last of the Summer Wine.

Amy Beatrice Carmichael was a Christian missionary in India, who opened an orphanage and founded a mission in Dohnavur. She served in India for 55 years without furlough and wrote many books about the missionary work there.

The Bitter Tea of General Yen is a 1933 American pre-Code drama film directed by Frank Capra and starring Barbara Stanwyck, and featuring Nils Asther and Walter Connolly. Based on the 1930 novel The Bitter Tea of General Yen by Grace Zaring Stone, the film is about an American missionary in Shanghai during the Chinese Civil War who gets caught in a battle while trying to save a group of orphans. Knocked unconscious, she is saved by a Chinese general warlord who brings her to his palace. When the general falls in love with the naive young woman, she fights her attraction to the powerful general and resists his flirtation, yet remains at his side when his fortune turns.

Mary Ann Aldersey艾迪綏 was the first Christian missionary woman to serve in China. She founded a school for girls in Ningbo, Zhejiang. Her pioneering the field of mission work for single women in China was the most remarkable outcome of her life.

Nantmor is a hamlet which lies about 1½ miles to the south of the village of Beddgelert in Gwynedd, Wales.

Yangcheng County is a county in the southeast of Shanxi Province, China, bordering Henan Province to the south. It is under the administration of the prefecture-level city of Jincheng and located in the latter's southwest confines. It is home to the AAAAA-rated House of the Huangcheng Chancellor.

Edith Sharpe was a British actress. Born Edith Mary Sharpe in Hackney, London. She married Alexander Francis Part in 1931 and had one child. Died in Harrow on the Hill, London aged 89.

Alan Burgess was an RAF pilot and English author who wrote several biographical and non-fiction books between the 1950s and the 1970s. He wrote biographies of Gladys Aylward, and Flora Sandes, and co-wrote Ingrid Bergman's autobiography. Bergman played Gladys Aylward in the film The Inn of the Sixth Happiness based on Burgess's biography.

The Black Mountain is a 1994 film by Zhou Xiaowen, who served as the director and cinematographer. Like other films from this director, the narrative refers to sexuality and violence and the principal characters are males who are troubled. Ai Liya stars as the woman. Zhao Xiaorui is the elder brother. Xie Yuan is the sixth brother.

Inborn Pair is a 2011 to 2012 Taiwanese romantic comedy drama television series created and developed by SETTV. It stars Annie Chen and Chris Wang as the main leads, and directed by Golden Bell Award winning director Feng Kai (馮凱). Filming began on November 18, 2011 and debuted on SETTV ETTV on December 13, 2011. Its final episode aired on April 9, 2012 with 84 episodes in total.

Margaret Noel Hood was a British actress. She was married to the Irish-born actor Charles Oliver. 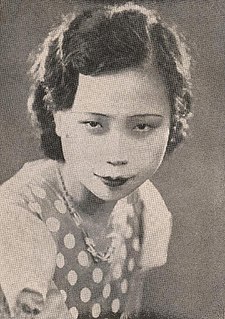 Ai Xia was a Chinese left-wing silent film actress and screenwriter. She committed suicide in 1934, the first Chinese actor to have done so. Her suicide inspired Cai Chusheng's classic film New Women starring Ruan Lingyu, who also killed herself soon after the release of the film.

Li Ling-Ai was a noted Chinese-American film producer, born in Hawaii, the sixth of nine children. Both her parents were first-generation Chinese immigrants who became doctors in Hawaii. Father Li Khai-Fai was a physiologist. Her mother Kong Tai Heong was an obstetrician.