Glamour is an online women's magazine published by Condé Nast Publications. Founded in 1939 and first published in April 1939 in the United States, it was originally called Glamour of Hollywood. [2]

In August 1943, the magazine changed its name to Glamour, with the subtitle for the girl with the job. [2] The magazine was published in a larger format than many of its contemporaries.

Glamour was the first women's magazine to feature an African-American cover girl when it included Katiti Kironde on the cover of its college issue in August 1968. [3]

Since 1990, the magazine has held an annual "Women of the Year" awards ceremony. [4]

On January 8, 2018, it was announced that Samantha Barry, previously the Head of Social Media and Emerging Media at CNN, would be the new Editor-in-Chief of Glamour. [5]

In November 2018, Glamour announced that its print edition would cease with its January 2019 issue in order to focus on its digital presence. [6]

Each year for the last 56 years, the magazine has been selecting a top ten list of outstanding college women across the country. Originally, the list was composed of the best dressed college juniors in America, but was changed for more substance with categories such as academic achievement, community service, and career goals as leading criteria. Hundreds of college juniors apply each year. Past winners, finalists include; Martha Stewart, Diane Sawyer, Swati Mia Saini, [7] Nancy Amanda Redd, 2003 Miss Virginia (MAO) and author of Body Drama, and Tamira A. Cole, Miss Black Kentucky USA 2009 and author of HUSH, actress Sheryl Lee Ralph and novelists Curtis Sittenfeld, Kate White, Janice Kaplan, Olympian Allison Schmitt, and Jean Hanff Korelitz.

Glamour Woman of the Year Awards

Each autumn, the magazine organizes the “Glamour Woman of the Year Awards” which recognize women in the public eye.

Glamour launched in the UK in April 2001, where it pioneered the “handbag size” format, with the tagline "fits in your life as well as your handbag". Each September, the magazine held “National Glamour Week”, when it featured extra coupons and competitions. In 2016, Glamour UK launched the Glamour Beauty Festival, on a new off-page beauty event featuring demonstrations, treatments and speakers. [11]

From its launch to the final traditional issue in November 2017, the magazine was edited by Jo Elvin, with Michelle Pamment serving as acting editor briefly in 2005. [12] In June 2009, to celebrate Glamour's eighth birthday in the UK, Glamour.com made a gallery of every cover since its launch. [13] In October 2017, following declining sales, it was announced that publication of the monthly UK edition would end at the end of 2017, and that the UK version would be a semi-annual publication. [14] [15] In November 2017, Deborah Joseph was appointed Chief Content Officer of Glamour UK. [16]

The Italian edition of Glamour was launched in December 1976, under the title Lei (She), then officially renamed Glamour, like its U.S. counterpart, in 1992.[ citation needed ]

The Russian edition was established in 2004, and is published monthly. [17]

The South African edition launched in April 2004, is published monthly and, since its inception, is edited by Pnina Fenster.

In Germany and Greece Lucky , a fashion and shopping magazine is published seasonally, in tandem with Glamour. Lucky magazine is being shut down.

A copy of it was the magazine to which George Costanza (Jason Alexander) masturbated on the series Seinfeld , when he was caught by his mother in the season 4 episode "The Contest". 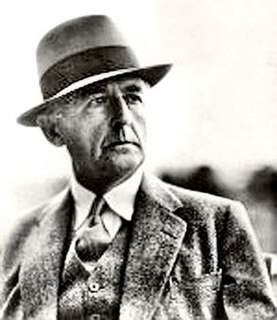 Condé Montrose Nast was an American publisher, entrepreneur and business magnate. He founded Condé Nast, a mass media company, now a subsidiary of Advance Publications, who published and maintained brands such as Vanity Fair, Vogue, and The New Yorker.

GQ is an international monthly men's magazine based in New York City and founded in 1931. The publication focuses on fashion, style, and culture for men, though articles on food, movies, fitness, sex, music, travel, sports, technology, and books are also featured. 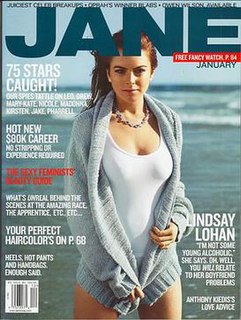 Architectural Digest is an American monthly magazine founded in 1920. Its principal subject is interior design and landscaping, rather than pure external architecture. The magazine is published by Condé Nast, which also publishes international editions of Architectural Digest in China, France, Germany, Russia, Spain, Mexico, and Latin America.

House & Garden is an American shelter magazine published by Condé Nast Publications that focusses on interior design, entertaining, and gardening.

Teen Vogue is a former US print magazine and current online publication launched in 2003 as a sister publication to Vogue, targeted at teenage girls. Like Vogue, it included stories about fashion and celebrities. Since 2015, following a steep decline in sales, the magazine cut back on its print distribution in favor of online content, which has grown significantly. The magazine had also expanded its focus from fashion and beauty to include politics and current affairs. In November 2017, it was announced Teen Vogue would cease its print edition and continue as an online-only publication as part of a new round of cost cuts. The final print issue featured Hillary Clinton on the cover and was on newsstands on December 5, 2017.

Cynthia Leive is a journalist, media leader and advocate for women. A cultural critic, she is the former editor-in-chief of both Glamour and Self magazines, and the author or producer of numerous books including the 2018 New York Times bestseller Together We Rise, about the making of the March for Women's Lives. Leive has interviewed heads of state, Hollywood and fashion's biggest personalities, and iconic leaders from all walks of life. She is currently a senior fellow at the USC Annenberg School for Communication and Journalism.

Vogue Italia is the Italian edition of Vogue magazine. Owned by Condé Nast International, it is the least commercial of all editions of Vogue magazine and has been called the top fashion magazine in the world.

Condé Nast Traveller is published by Condé Nast Publications Ltd, from Vogue House in Hanover Square, Mayfair, London. It is a luxury travel magazine aimed at the upmarket, independent traveller. 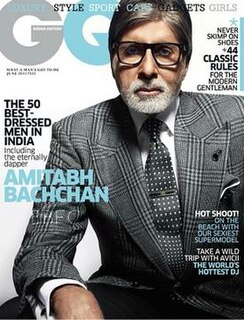 GQ is the Indian edition of the American monthly men's magazine called GQ. It is the 15th international edition of GQ and is published by Condé Nast India Pvt. Ltd., a 100% owned subsidiary of Condé Nast International. Condé Nast gained 100% ownership after regulatory changes in 2005 permitted 100% foreign direct investment in non-news and current affairs publications. GQ was the second magazine released in India, after Vogue India, that is 100% foreign owned. Condé Nast India is based in Mumbai and also has an office in New Delhi.

The Condé Nast College of Fashion & Design is the first educational establishment of the Condé Nast Publications Ltd. set in the heart of London, UK. The current Principal of the College is Susie Forbes, and the Academic Director is Angela Jones. 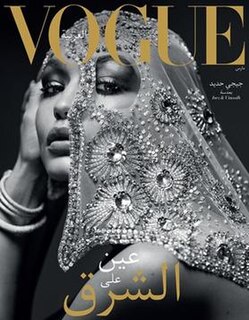 Samantha Barry is the current editor in chief for Glamour magazine.

Vogue Poland is the Polish edition of the American fashion and lifestyle monthly magazine Vogue. The magazine has been published since February 2018, becoming the twenty-third local edition of Vogue.