Glenn Woodward Davis (December 26, 1924 – March 9, 2005) was a professional American football player for the Los Angeles Rams. He is best known for his college football career for the United States Military Academy at West Point from 1943 to 1946, where he was known as "Mr. Outside." He was named a consensus All-American three times, and in 1946 won the Heisman Trophy and was named Sporting News Player of the Year and Associated Press Athlete of the Year.

Davis was born and raised in Southern California, the son of a bank manager. Glenn and his twin brother Ralph played high school football at Bonita High School in La Verne, California. [1] [2] In 1942, Davis led the Bearcats to an 11–0 record and the school's first-ever football championship, earning the Southern Section Player of the Year award. [3] In 1989, Bonita High's stadium was dedicated in his name. The brothers were close and had originally planned to attend USC in Los Angeles, but when their U.S. Representative agreed to sponsor them with appointments to West Point, they decided to go there.

At West Point, under coach Earl Blaik, Davis played fullback in his freshman season. Blaik moved him to halfback for his three varsity seasons, while Doc Blanchard took over at fullback. With Davis and Blanchard, Army went 27–0–1 in 1944, 1945, and 1946. Davis was nicknamed "Mr. Outside", while Blanchard was "Mr. Inside".

Davis averaged 8.3 yards per carry over his career and 11.5 yards per carry in 1945; both results are records which still stand today. Davis led the nation in 1944 with 120 points. He scored 59 touchdowns, including eight on his freshman squad, in his career. His single-season mark of 20 touchdowns stood as a record for 10 years.

Blanchard and he set a then-record 97 career touchdowns by two teammates. (The record was broken by USC backs Reggie Bush and LenDale White, who had 99 career touchdowns.) In 2007, Davis was ranked #13 on ESPN's list of Top 25 Players in College Football History.

For all three varsity years at West Point, Davis was a "consensus" All-America player (that is, selected by all the different groups picking All-America teams). In 1944, he won the Maxwell Award and the Walter Camp Trophy, and was runner-up for the Heisman Trophy. In 1945, he was again runner-up for the Heisman (won by his teammate Blanchard). In 1946, he won the Heisman and was named the Associated Press Male Athlete of the Year. In 1961, Davis was inducted into the College Football Hall of Fame.

Davis graduated from West Point in June 1947 and entered the U.S. Army as a second lieutenant. He was offered a contract and $75,000 signing bonus by the Brooklyn Dodgers, but declined, as he was required to serve in the Army and would be a relatively old rookie after that. [5]

In spite of Davis' service obligation, the Detroit Lions of the National Football League selected Davis with the second overall pick of the 1947 NFL Draft, held in December 1946. [6] In September 1947, the Los Angeles Rams acquired the rights to Davis from the Lions. [7] He applied to resign his commission in December, but was refused by the Secretary of the Army Kenneth Royall. [8] [9]

Davis was also denied extended furloughs or other accommodations that might allow him to play football while serving in the Army. There was public feeling that after the expense of his West Point education, he should not just go off to play football.

Davis (and Blanchard) did earn $25,000 each by appearing in the low-budget movie Spirit of West Point (about their football careers). Davis tore a ligament in his right knee during filming. [10]

Davis served three years in the Army. While on leave in 1948, he attended the Rams training camp and played in a preseason game. [11] [12] [13] He then reported for duty in Korea (this was before the Korean War, which began after he returned to the U.S.).

Davis moved to Texas to work in the oil industry, but returned to California a few years later. He became special events director for the Los Angeles Times , organizing and directing the newspaper's charity fundraising events. He held this job until his retirement in 1987. [4] [17] The Times gives the annual Glenn Davis Award in his honor (not to be confused with the Glenn Davis Army Award).

Stephen Wood Van Buren was a Honduran-American professional football player who was a halfback for the Philadelphia Eagles of the National Football League (NFL) from 1944 to 1951. Regarded as a powerful and punishing runner with excellent speed, through eight NFL seasons he won four league rushing titles, including three straight from 1947 to 1949. At a time when teams played 12 games a year, he was the first NFL player to rush for over ten touchdowns in a season—a feat he accomplished three times—and the first to have multiple 1,000-yard rushing seasons. When he retired, he held the NFL career records for rushing attempts, rushing yards, and rushing touchdowns. 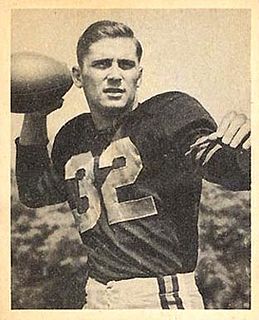 John Christopher Lujack is a former American football quarterback and 1947 Heisman Trophy winner; he is currently the oldest living recipient of the Heisman Trophy. Lujack played college football for the University of Notre Dame, and professionally for the Chicago Bears. He was the first of several successful quarterbacks who hailed from Western Pennsylvania. Others include Pro Football Hall of Fame members Johnny Unitas, Joe Namath, Dan Marino, Jim Kelly, Joe Montana and George Blanda. 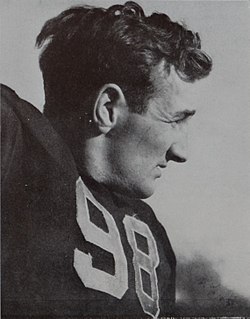 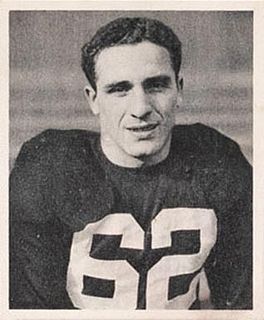 Felix Anthony "Doc" Blanchard was best known as the college football player who became the first junior to win the Heisman Trophy, Maxwell Award and was the first football player to win the James E. Sullivan Award, all in 1945. He played football for the United States Military Academy at West Point, where he was known as "Mr. Inside." Because his father was a doctor, Felix Blanchard was nicknamed "Little Doc" as a boy. After football, he served in the United States Air Force from 1947 until 1971 when he retired with the rank of colonel.

Donald John Kindt, Sr. was an American defensive back and halfback who played nine seasons from 1947 to 1955 for the Chicago Bears in the National Football League. Kindt played college football for the University of Wisconsin Badgers primarily as a halfback from 1943–1946, missing the 1944 and half of the 1945 season because of World War II. He was the starting halfback for the Badgers for most of his college career.

Robert Lee Dobbs was an American football fullback and coach.

Arnold Tucker was a United States Air Force officer who graduated from the United States Military Academy at West Point, New York in 1947.

The 1945 Army Cadets football team represented the United States Military Academy in the 1945 college football season. The Cadets were coached by Earl Blaik in his fifth year and finished the season undefeated with a record of nine wins and zero losses (9–0). The squad was also recognized as national champions for the 1945 season. For the season, the Cadets' offense scored 412 points, while the defense allowed 46 points.

The 1946 Army Cadets football team represented the United States Military Academy in the 1946 college football season. The Cadets were coached by Earl Blaik in his sixth year and finished the season undefeated with a record of nine wins, zero losses and one tie (9–0–1). The squad was also recognized as national champions for the 1946 season by several selectors. The Cadets outscored their opponents, 263 to 80.

John Daniel Foldberg, a 1946 graduate of Sunset High School in Dallas, Texas, was an American military officer and football player. He played as an end for the Army Cadets at the United States Military Academy. Army head coach Earl Blaik rated him the best end he had ever coached. He was selected in the 1951 NFL Draft, but pursued a 27-year military career. Foldberg served as an infantry officer in the Korean and Vietnam Wars. 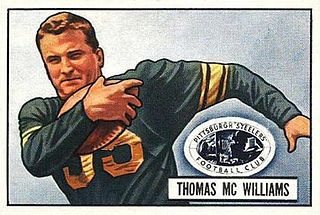 Thomas Edward "Shorty" McWilliams was an American football player who played one season with the Pittsburgh Steelers of the National Football League (NFL). He was drafted by the Chicago Bears in the eighth round of the 1948 NFL Draft and the Los Angeles Dons in the 16th round of the 1948 AAFC Draft. He played college football at Mississippi State University and the United States Military Academy.