Gloddaeth Hall originated as a large country house in Llandudno, Caernarfonshire (now Conwy), Wales. It is designated by Cadw as a Grade I listed building. [1] It stands on land which had been owned by the Mostyn family since the 15th century. The core of the building is a 16th-century hall and two storey solar block, built of stone rubble with freestone dressings. [2] There are gabled stone slate roofs. [2] The hall is open to the hammer beam roof. [2] The lower room of the solar has 16th century panelling, the upper 17th century panelling. [2] A wing to the east was added around 1700. [1]

In the 19th century, further additions were made to the building by William Nesfield, [1] and by John Douglas, who designed a new west wing for Augusta, Lady Mostyn in 1889. [3]

A 17th century dovecote remains. [2] Some elements of the formal gardens to the south-east may also be 17th century. [2]

Llandudno is a seaside resort, town and community in Conwy County Borough, Wales, located on the Creuddyn peninsula, which protrudes into the Irish Sea. In the 2011 UK census, the community – which includes Gogarth, Penrhyn Bay, Craigside, Glanwydden, Penrhynside, and Bryn Pydew – had a population of 20,701. The town's name means "Church of Saint Tudno".

Merthyr Mawr is a village and community in Bridgend, Wales. The village is about 2½ miles from the centre of Bridgend town. The population of the community at the 2011 census was 267. The community occupies the area west of the Ewenny River, between Bridgend and Porthcawl. It takes in the settlement of Tythegston and a stretch of coastal sand dunes known as Merthyr Mawr Warren. It is in the historic county of Glamorgan. 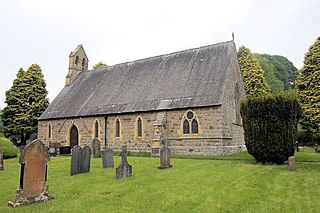 Pontrobert is an ecclesiastical parish that was formed in September 1854. It comprises the townships of Teirtref and part of Nantymeichiaid in the parish Meifod, a portion of Cynhinfa which was in the parish of Llangynyw and portions of the townships of Fachwel, Llaethbwlch and Cadwnfa which were in the parish of Llanfihangel. The total area of this parish is 5,000 acres. As a result of this arrangement, Pont Robert is now divided between the present day Community Councils of Meifod, Llangyniew and Mawddwy. Pontrobert was within the historic county of Montgomeryshire, now forming part of Powys. The name Pontrobert is derived from Robert ap Oliver of Cyhinfa, who built the original bridge over the River Vyrnwy around 1700. An alternative Welsh name for Pontrobert is Pont y ddolfeiniog.

Llanrhos is a village to the east and south of Llandudno in Conwy County Borough, Wales. The parish traditionally includes Deganwy, the Craig-y-Don district of Llandudno, the Little Orme and Penrhyn Bay. Until the 19th century, the name Eglwysrhos was used interchangeably with Llanrhos, but seemed to fall out of favour with time. From the 19th century Eglwysrhos was predominately used to describe the wider parish, and Llanrhos the village inside its boundaries. The parish was almost entirely rural until the 19th and 20th century when urban and residential developments began to be built - first at Deganwy, then Craig-y-Don and later Penrhyn Bay. It is bordered to the north by Llandudno Parish, and to the southeast by the parish of LLangwstenin.

Bodysgallen Hall is a manor house in Conwy county borough, north Wales, near the village of Llanrhos. Since 2008 the house has been owned by The National Trust. It is a Grade I listed building, currently used as a hotel. This listed historical building derives primarily from the 17th century, and has several later additions. Bodysgallen was constructed as a tower house in the Middle Ages to serve as defensive support for nearby Conwy Castle. According to tradition, the site of Bodysgallen was the 5th century AD stronghold of Cadwallon Lawhir, King of Gwynedd, who had wide-ranging exploits as far as Northumberland. 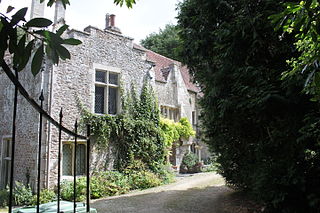 The Abbey, Beckington in Beckington, Somerset, England is a historic building that was founded as a monastic grange and also used as a college for priests; the building was begun in 1502, but after the Dissolution of the Monasteries it became a private house. It was altered in the early 17th century with a new front and a sumptuous barrel vaulted plaster ceiling, and also altered in the 19th century. The house was used as a school, restaurant and dance hall in 19th and 20th centuries but has now been restored as three houses: the most important plaster ceiling is in the house now known as "The Abbey". 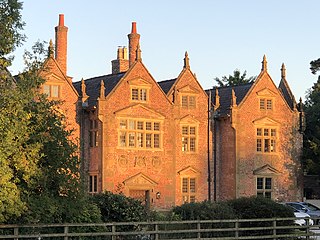 Trevalyn Hall in Rossett, a Grade II* listed building, is an Elizabethan manor house near Wrexham in Wales. It was built by John Trevor in 1576. The Trevor family of Trevalyn were one of the leading families in East Denbighshire by about 1600 with numerous estates in both Flintshire and Denbighshire. The Plas Teg estate in Hope, Flintshire was also acquired by the family when it was purchased by Sir John Trevor I (1563–1630) and it was he who built the present Plas Teg house in 1610. 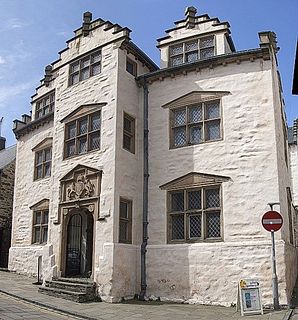 Plas Mawr is an Elizabethan townhouse in Conwy, North Wales, dating from the 16th century. The property was built by Robert Wynn, a member of the local gentry, following his marriage to his first wife, Dorothy Griffith. Plas Mawr occupied a plot of land off Conwy's High Street and was constructed in three phases between 1576 and 1585 at a total cost of around £800. Wynn was known for his hospitality, and the household was supported by Wynn's local dairy herds, orchards and gardens. On his death he laid out complex instructions for dividing his estate; the resulting law-case took years to resolve, effectively preventing the redevelopment of the house and preserving it in its original condition.

Wigfair Hall is a large country house standing in an elevated position above the River Elwy near the village of Cefn Meiriadog, Denbighshire, Wales. It is a Grade II* listed building. 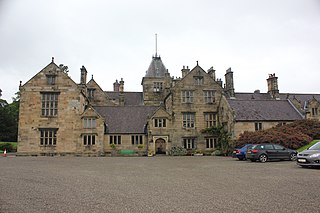 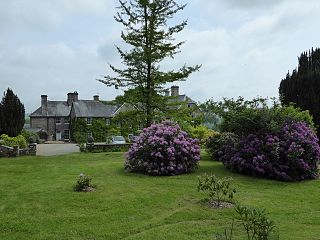 The Argoed, Penallt, Monmouthshire, Wales, is a Victorian country house dating from the 1860s, with earlier origins from the late 16th and early 17th centuries. It is a Grade II* listed building. The English meaning of the Welsh word argoed is 'by a wood'.

Whitecross Street is a historic street in the town centre of Monmouth, Monmouthshire, Wales. It was in existence by the 15th century, and appears as Whit crose on the 1610 map of the town by cartographer John Speed. It runs in an east-west direction, between Church Street and St James Square. It has been suggested that the street takes its name from a plague cross. Whitecross Street is lined with numerous listed buildings.

Newton Court is a neoclassical house, completed in 1802, situated on the hillside above Dixton, 1 mi (1.6 km) north-east of the town on Monmouth, in Monmouthshire, Wales. It is a Grade II* listed building. The stable block is listed as a Site of Special Scientific Interest (SSSI), noted for as a breeding site for lesser horseshoe bats.

Gyrn Castle is a Grade II-listed castellated mansion in Llanasa in Flintshire.

Plasau Duon or Plasauduon is a timber-framed house, formerly in the parish of Carno, but now within the area of the community council of Caersws in the historic county of Montgomeryshire, and now in Powys, Wales. It is located on a site above the left bank of the Afon Carno, on a farm road leading off the lane from the A.470 to Bwlch-y-garreg. It is a fine example of a ‘’Severn Valley’’ house and has a Grade II* listing. It is likely to have been built in the second half of the 16th. century. 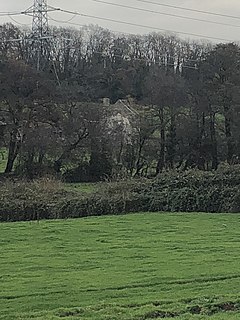 Court Farmhouse and the attached Court Farm Cottage, Llanover, Monmouthshire is a country house dating from the early 16th century. Originally two houses, which became the East and West wings of a larger house, with a connecting hall constructed in the 17th century, it is now again sub-divided. The house is a Grade II* listed building. 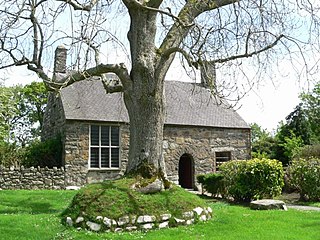 Bell Hall is a grade I listed building, in Naburn, in the rural southern part of the city of York, in England.

Trefecca Fawr is a well-preserved 17th-century Welsh gentry house located in Talgarth, Powys. Constructed in approximately 1650, the property has been owned by various notable individuals including Thomas Harris and the Gwynne family. The two-storey gentry house is listed at Grade I by Cadw, and the surrounding land is listed as a Grade II landscape. This property should not be confused with nearby Trefeca College, although the histories of the two are intertwined.