Gnesio-Lutherans (from Greek γνήσιος [gnesios]: genuine, authentic) [1] is a modern name for a theological party in the Lutheran churches, [2] in opposition to the Philippists [3] after the death of Martin Luther and before the Formula of Concord. In their own day they were called Flacians by their opponents and simply Lutherans by themselves. Later Flacian became to mean an adherent of Matthias Flacius' view of original sin, rejected by the Formula of Concord. In a broader meaning, the term Gnesio-Lutheran is associated mostly with the defence of the doctrine of Real Presence.

After the death of Luther, many theological controversies arose among the Lutherans, mostly due to teaching of Philip Melanchthon. Gnesio-Lutherans were profiled by defending Martin Luther's doctrine, in the beginning led by Matthias Flacius. The Gnesio-Lutherans exercised strict doctrinal discipline, but they also opposed with equal determination what they considered to be the errors of their fellow-combatants like von Amsdorf (Amsdorfians), Flacius (Flacians), Poach, and others. The centres of Gnesio-Lutherans were Magdeburg and the University of Jena.

The Crypto-Calvinistic Controversy was the largest of the controversies of the second generation of the Lutheran Reformation. Since it was far more fundamental to the Lutheran Church, Lutherans outside of the Flacian party took the Gnesio-Lutheran position against Philippism and Crypto-Calvinism. In the middle between the Philippists and the Gnesio-Lutherans, the "Centrist party" included Johannes Brenz, Jakob Andreae, Martin Chemnitz, Nikolaus Selnecker, David Chytraeus, Andreas Musculus, and others. Unlike the Gnesio-Lutherans, the members of the "centre party" were opposed to any unnecessary controversies involving no doctrinal differences, and careful not to fall into any extreme position themselves. The Gnesio-Lutheran Joachim Westphal was first to write to defend the Real Presence against the Calvinists, and Melanchthon stigmatized his and other Gnesio-Lutherans' doctrine as "bread worship". [4] 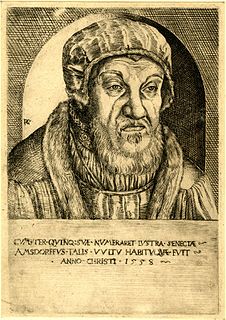 Nicolaus von Amsdorf was a German Lutheran theologian and an early Protestant reformer. As bishop of Naumburg (1542–1546), he became the first Lutheran bishop in the Holy Roman Empire.

Matthias Flacius Illyricus was a Lutheran reformer from Istria, present day Croatia. He was notable as a theologian, sometimes dissenting strongly with his fellow Lutherans, and as a scholar for his editorial work on the Magdeburg Centuries.

Crypto-Calvinism is a pejorative term describing a segment of German members of the Lutheran Church accused of secretly subscribing to Calvinist doctrine of the Eucharist in the decades immediately after the death of Martin Luther in 1546. 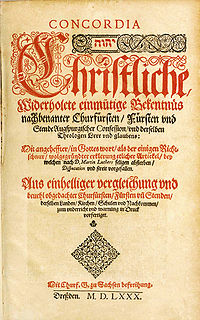 The Book of Concord (1580) or Concordia is the historic doctrinal standard of the Lutheran Church, consisting of ten credal documents recognized as authoritative in Lutheranism since the 16th century. They are also known as the symbolical books of the Evangelical Lutheran Church.

The Smalcald Articles or Schmalkald Articles are a summary of Lutheran doctrine, written by Martin Luther in 1537 for a meeting of the Schmalkaldic League in preparation for an intended ecumenical Council of the Church.

The Augsburg Interim was an imperial decree ordered on 15 May 1548 at the 1548 Diet of Augsburg by Charles V, Holy Roman Emperor, who had just defeated the forces of the Protestant Schmalkaldic League in the Schmalkaldic War of 1546/47. Although it ordered Protestants to readopt traditional Catholic beliefs and practices, including the seven Sacraments, it allowed for Protestant clergymen the right to marry and for the laity to receive communion in both kinds. It is considered the first significant step in the process leading to the political and religious legitimization of Protestantism as a valid alternative Christian creed to Roman Catholicism finally realized in the 1552 Peace of Passau and the 1555 Peace of Augsburg. The Interim became Imperial law on 30 June 1548. The Pope advised all bishops to abide by the concessions made to the Protestants in the Interim in August 1549.

The Magdeburg Centuries is an ecclesiastical history, divided into thirteen centuries, covering thirteen hundred years, ending in 1298; it was first published from 1559 to 1574. It was compiled by several Lutheran scholars in Magdeburg, known as the Centuriators of Magdeburg. The chief of the Centuriators was Matthias Flacius. Due to its revolutionary critical method of presenting history, it is the basis of all modern church history.

Manducatio impiorum refers to those who eat the Lord’s Supper but do not believe all Christian doctrine including the rejection of the real presence in the Lord’s Supper. Martin Luther and the Gnesio Lutherans held to this view, which is codified in the Epitome of the Formula of Concord VII found in the Book of Concord.. Philipp Melanchthon and his followers, the Philippists, with the Reformed denied this teaching including Huldrych Zwingli and John Calvin Calvin believed that Christ's body is given to all communicants, but only received by those who have faith. Lutherans refer to this as the receptionist error. It relates to doctrine of the real presence of Christ in the Eucharist, and, in particular, to the interpretation of 1 Corinthians 11:27-29:

The Philippists formed a party in early Lutheranism. Their opponents were called Gnesio-Lutherans. 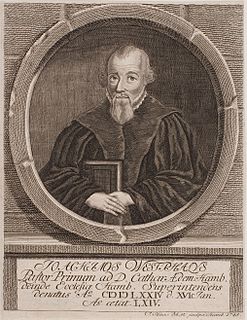 Nicolaus Gallus was leader of the Lutheran Reformation in Regensburg.

The Leipzig Interim was one of several temporary settlements between the Emperor Charles V and German Lutherans following the Schmalkaldic War. It was presented to an assembly of Saxon political estates in December 1548. Though not adopted by the assembly, it was published by its critics under the name "Leipzig Interim."

Johann Stössel was a Lutheran Theologian and Reformer. 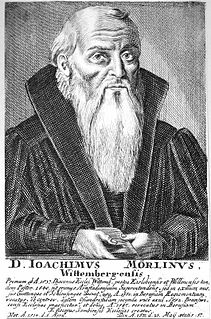 The Osiandrian controversy was a controversy amongst the Lutherans, originated in around 1550 by Andreas Osiander, a German theologian. He asserted that it was only through the righteousness of Christ with respect to the divine nature that mankind could obtain justification, and that men became partakers of Christ's divine righteousness through faith. Osiander thought the prevailing current in his area gave an overemphasis on forensic justification--he saw Christ as a physician who heals instead of as a judge who declares one righteous. He taught that God does not declare the sinner just, but makes him just. Osiander held that justification does not impute Christ's obedience and righteousness to the sinner, but instead the indwelling of Christ causes justification.

Maximilian Mörlin was a Lutheran theologian, court preacher, Superintendent in Coburg, and Reformer.