Last updated February 07, 2021
Illegal blocking of a downward traveling shot in basketball
For the article about goaltending in ice hockey, see goaltender.

In basketball, goaltending is the violation of interfering with the ball while it is on its way to the basket and it is (a) in a downward flight (b) above the basket ring and within the imaginary cylinder and (c) not touching the rim. [1] [2] [3] [4] In the NCAA and (W)NBA, goaltending is also called if the ball has already touched the backboard while being above the height of the rim in its flight, regardless of it being in an upward or downward flight or whether it is directly above the rim. [5] [6] Goaltending in this context defines by exclusion what is considered a legal block of a field goal. In high school and NCAA basketball, goaltending is also called when a player interferes with a free throw at any time in its flight towards the basket. [1] [7] If goaltending is called for interference with a field goal, the shooting team is awarded the points for the field goal as if it had been made. The team who commits the violation then inbounds the ball at its baseline, the same as if it had conceded a basket. In high school and NCAA basketball, if goaltending is called on a free throw, the shooting team is awarded one point and a technical foul is called against the offending player. [8] [9]

Goaltending is commonly confused with the related violation of basket interference (also called offensive goaltending) which occurs during an attempted field goal when a player touches the basket, the rim, or the ball when it is on the rim or directly above it. Like goaltending, basket interference when committed by the defending team results in an award of points to the shooting team as if the attempted field goal had been made.

FIBA rules allow a defender to block any shot that is over the rim and the ball is on its upward flight.

The prohibition against goaltending was adopted by the NCAA in 1944 (and later by the NBL) specifically because of George Mikan. Prior to the advent of the high-jumping 6 ft 10 in (2.08 m) Mikan, goaltending was not addressed because it was thought physically impossible. [10]

It is possible for a team to goaltend at the buzzer, although this is very rare. This is because, according to (W)NBA rules, once the shot is taken, the period will be over, so goaltending rules would still apply even after the clock hits zero. It happened in the 2012–13 season when Jermaine O'Neal was called for a goaltend against the Houston Rockets after time expired. This happened in the fourth quarter, so the Phoenix Suns lost the game 101–98. 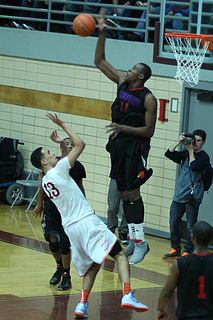 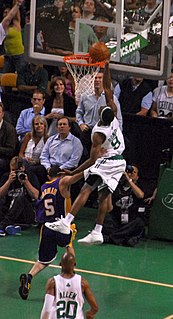