Goetta ( /ˈɡɛtə/ ) [1] is a meat-and-grain sausage or mash [2] of German inspiration that is popular in the greater Cincinnati area. It is primarily composed of ground meat (pork, or pork and beef), pin-head oats and spices. [3] It was originally a dish meant to stretch out servings of meat over several meals to conserve money, [4] and is a similar dish to scrapple and livermush, both also developed by German immigrants. [5]

The dish probably originated with German settlers from the northwestern regions of Oldenburg, Hannover, and Westphalia who emigrated to the Cincinnati area in the 19th century. [1] [6]

While goetta comes in a variety of forms, all goetta is based around ground meat combined with pin-head oats, the "traditional Low German cook's way of stretching a minimum amount of meat to feed a maximum number of people." [8] :244 Usually goetta is made from pork, but occasionally contains equal parts pork and beef. Goetta is typically flavored with bay leaves, rosemary, salt, pepper, and thyme. It contains onions and sometimes other vegetables. [1] The USDA standards for goetta require that it contain no less than 50% meat. [9]

While similar to Pennsylvanian scrapple and North Carolinian livermush in that it is a dish created by German immigrants and uses a grain product for the purpose of stretching out pork to feed more people, scrapple is made with cornmeal and livermush with either cornmeal or rice rather than the pinhead oats used in goetta. [10] [11]

Goetta is made with meat, oats, broth, spices, often onions, and occasionally other vegetables, simmered until thick, poured into loaf pans, and chilled or allowed to cool completely so that the loaves become firm enough to slice. It is then cut into slices and fried, often in butter. [8] :244

Traditionally goetta is served as a breakfast food, but it is also put into sandwiches and used as a topping for burgers and pizza. [12]

A number of commercial distributors produce and sell goetta in the parts of Ohio, Kentucky, and Indiana near Cincinnati. Glier's Goetta, established in 1946, produces more than 1,000,000 lb (450 metric tons) annually, around 99 percent of which is consumed locally in Greater Cincinnati. [6] Queen City Sausage is the next largest producer, while multiple small and artisanal producers also make goetta in and around Cincinnati. [1]

"Glier's Goettafest" is an annual culinary festival held in August on the Ohio River waterfront near Newport, Kentucky's Newport on the Levee. The festival celebrates both the dish and Greater Cincinnati's German American heritage. While the main focus of the festival is goetta served in many different ways, it also typically includes music, dancing, and other public entertainment. [13] In 2019 it expanded to two consecutive weekends. [14]

Glier's markets goetta as the "German Breakfast Sausage," [15] which may create the impression that it is something commonly eaten for breakfast in Germany. Cincinnati food expert Dan Woellert says, "Will you find something on a menu called goetta in a Westphalian gasthaus? The answer is no," but that grützwurst and knipp are similar "meat gruels". [16] 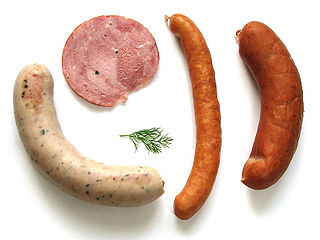 Sausages are a meat product usually made from ground meat, often pork, beef, or poultry, along with salt, spices and other flavourings. Other ingredients such as grains or breadcrumbs may be included as fillers or extenders. Some sausages include other ingredients for flavour. 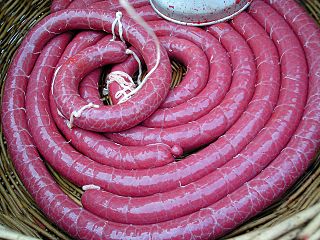 Blood sausages are sausages filled with blood that is cooked or dried and mixed with a filler until it is thick enough to solidify when cooled. Variants are found worldwide. Pig, cow, horse, donkey, sheep, duck, and goat blood can be used, varying by country. Black pudding is the distinct regional type of blood sausage originating in the United Kingdom and Ireland. 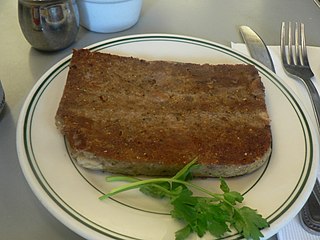 Scrapple, also known by the Pennsylvania Dutch name Pannhaas or "pan rabbit", is traditionally a mush of pork scraps and trimmings combined with cornmeal and wheat flour, often buckwheat flour, and spices. The mush is formed into a semi-solid congealed loaf, and slices of the scrapple are then pan-fried before serving. Scraps of meat left over from butchering, not used or sold elsewhere, were made into scrapple to avoid waste. Scrapple is best known as an American food of the Mid-Atlantic states. Scrapple and panhaas are commonly considered an ethnic food of the Pennsylvania Dutch, including the Mennonites and Amish. Scrapple is found in supermarkets throughout the region in both fresh and frozen refrigerated cases.

Meatloaf is a dish of ground meat that has been combined with other ingredients and formed into the shape of a loaf, then baked or smoked. The final shape is either hand-formed on a baking tray or pan-formed by cooking it in a loaf pan. It is usually made with ground beef, although ground lamb, pork, veal, venison, poultry and seafood are also used, sometimes in combination. Vegetarian adaptations may use imitation meat or pulses. 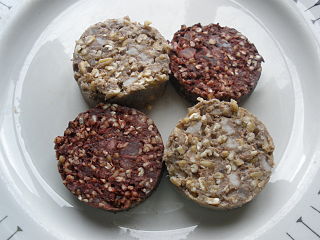 Red pudding is a meat dish served mainly at chip shops in some areas of Scotland as an alternative to fish. Red pudding is associated with the east of Scotland in general and particularly with Fife, though even in this area it has become less common in recent years. Its main ingredients are beef, pork, pork rind or bacon, suet, rusk, wheat flour, spices, salt, beef fat and colouring.

The Lorne sausage, also known as square sausage, slice or flat, is a traditional Scottish food item made from minced meat, rusk and spices. Although termed a sausage no casing is used to hold the meat in shape, hence it is usually served as square-shaped slices from a formed block. It is a common component of the traditional Scottish breakfast.

Peasant foods are dishes specific to a particular culture, made from accessible and inexpensive ingredients, and usually prepared and seasoned to make them more palatable. They often form a significant part of the diets of people who live in poverty, or have a lower income compared to the average for their society or country.

Livermush is a Southern United States pork food product prepared using pig liver, parts of pig heads, cornmeal and spices. It is a regional cuisine that is common in Western North Carolina, and is typically consumed as a breakfast and lunch food. It has been suggested that livermush derives from scrapple. By law in North Carolina, the product must consist of at least 30% pig liver. Several festivals exist in North Carolina that are dedicated to the food. 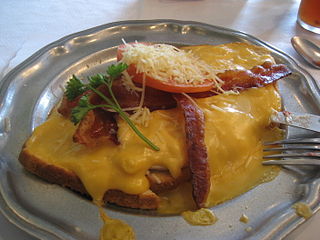 The cuisine of Kentucky mostly resembles that of traditional Southern cuisine. Some common dinner dishes are fried catfish and hushpuppies, fried chicken and country fried steak. These are usually served with vegetables such as green beans, greens, pinto beans slow-cooked with pork as seasoning and served with cornbread. Other popular items include fried green tomatoes, cheese grits, corn pudding, fried okra, and chicken and dumplings, which can be found across the commonwealth. In addition to this, Kentucky is known for its own regional style of barbecue. This style of barbecue is unique in itself given that it uses mutton, and is a style of Southern barbecue unique to Kentucky. Although Kentucky's cuisine is generally very similar to that of traditional Southern cuisine, it does differ with some unique dishes, especially in Louisville where the Hot Brown and Derby pie, originated.

A full breakfast is a substantial cooked breakfast meal, often served in the United Kingdom and Ireland, that typically includes bacon, sausages, eggs, black pudding, baked beans, tomatoes and mushrooms, toast, and a beverage such as coffee or tea. It appears in different regional variants and is referred to by different names depending on the area. While it is colloquially known as a "fry up" in most areas of Britain and Ireland, it is usually referred to as a full English breakfast in England, and as a "full Irish", "full Scottish", "full Welsh", "full Cornish", and "Ulster fry" in the Republic of Ireland, Scotland, Wales, Cornwall, and Northern Ireland, respectively. 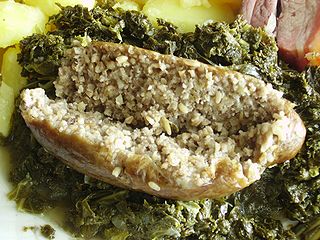 Pinkel is a smoked Kaszanka, which is a type of sausage. It is eaten mainly in northwest Germany, especially the region around Oldenburg, Bremen and Osnabrück as well as in East Frisia and Friesland.

Knipp is a type of sausage made by mixing meat with grains (Grützwurst) related to Pinkel which comes from the Bremen and Lower Saxony regions of Germany.

Stippgrütze, also called Wurstebrei, is a German dish from Westphalia which is similar to Grützwurst or Knipp. It consists of barley groats cooked in sausage juices (Wurstbrühe), which are enriched with pieces of meat, offal, such as heart, kidney or liver and seasoned with spices and salt. More rarely, finely chopped onions are added. The cooked ingredients are minced after the juices have been poured off and a crumbly cake is left which is held together with fat and which sets on cooling. There are various recipes, but they all contain barley groats, fat and meat.

Black pudding, also known as blood pudding, is a distinct regional type of blood sausage originating in the United Kingdom and Ireland. It is made from pork blood, with pork fat or beef suet, and a cereal, usually oatmeal, oat groats or barley groats. The high proportion of cereal, along with the use of certain herbs such as pennyroyal, serves to distinguish black pudding from blood sausages eaten in other parts of the world.