The Golden Eye Diamond is a flawless 43.51-carat (8.702 g) Fancy Intense Yellow diamond, claimed by one of its past owners to be the world's largest of its cut and color. [1] [2] It is believed to come from the Kimberley area of South Africa. [3] Tom Moses, a senior vice president with the Gemological Institute of America, agrees that it came from South Africa, but it has not been able to be determined the mine of origin. [4]

Upon the arrest of Ohio businessmen Paul Monea and Mickey Miller, its actual ownership was unclear. [5] The Federal Bureau of Investigation seized the diamond following an undercover investigation of Monea and Miller that resulted in his conviction for money laundering and the diamond's forfeiture to the U.S. government in 2007. [5] Amid Monea and Millers prosecution, 17 claimants came forward in the case to claim ownership, or an ownership interest, in the Golden Eye Diamond (Akron Federal Court Case No. 5:07CR0030). The Court ruled that three claimants had colorable ownership claims and would be allowed to proceed to civil trial: Charity Fellowship Church, Jerry DeLeo of Corona Clay Corp., and The Monea Family Trust. The court found that the Church and Jerry DeLeo had spent nearly $1,000,000 to cut and develop the 124.5 carat gem. Monea and his trust were never able to establish ownership or purchase of the rough stone, although extensive evidence was presented of the diamond's origins with newspaper articles and researched records. The uncontested evidence showed that the Golden Eye Diamond had been obtained from the VanWyke family of Kimberly South Africa most recently, and that the stone had been held by the family for some 150-years. The original VanWyke was neighbor to the De Beers, and discovered the 124.5 carat Paragon on his property in the DuToit's Pan Mine, in Kimberly South Africa, in 1871. This evidence has never been disproven,[ citation needed ] and for over 150-years no other diamond on earth was thought to be the original DuToit II Diamond (the first African diamond found over 100-carats).

The diamond was ultimately approved to be auctioned by a federal judge. The court also found that, although people had ownership claim, Monea's conspiracy to sell the diamond existed - somehow - before Monea even owned the diamond. [6] Its sale was planned tentatively in January 2011, [7] but after a delay it was announced it will be sold via online auction in September 2011, [8] with a minimum bid of $900,000. [5] The Diamond is currently owned by Jerre Hentosh after he won it via online auction on Bid4Assets with a winning bid of $2.84 million. [9] 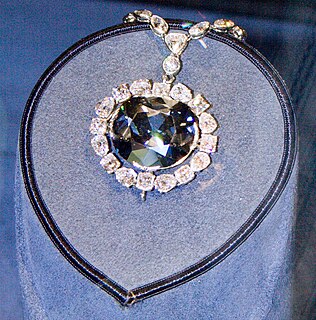 The Hope Diamond is one of the most famous jewels in the world, with ownership records dating back almost four centuries. Its much-admired rare blue color is due to trace amounts of boron atoms. Weighing 45.52 carats, its exceptional size has revealed new findings about the formation of diamonds. 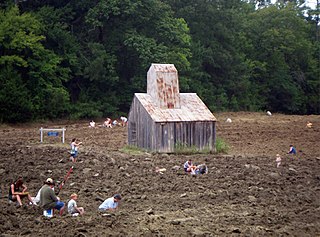 Crater of Diamonds State Park is a 911-acre (369 ha) Arkansas state park in Pike County, Arkansas, in the United States. The park features a 37.5-acre plowed field, the world's only diamond-bearing site accessible to the public. Diamonds have continuously been discovered in the field since 1906, including the Strawn-Wagner Diamond. The site became a state park in 1972 after the Arkansas Department of Parks and Tourism purchased the site from the Arkansas Diamond Company and Ozark Diamond Mines Corporation, who had operated the site as a tourist attraction previously.

The Golden Jubilee Diamond, a 545.67 carat brown diamond, is the largest cut and faceted diamond in the world. It outweighs the Cullinan I by 15.37 carats. The Golden Jubilee Diamond was discovered in the Premier Mine, which is also the origin of the Cullinan diamond (1905) and other notables such as the Taylor–Burton (1966) and the Centenary (1986). Cullinan I, also known as the Great Star of Africa, had held the title of the largest cut and faceted diamond since 1908. 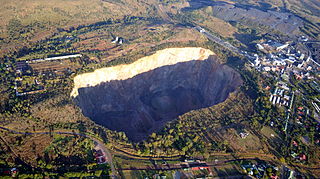 The Premier Mine is an underground diamond mine owned by Petra Diamonds in the town of Cullinan, 40 kilometres (25 mi) east of Pretoria, Gauteng Province, South Africa. Established in 1902, it was renamed the Cullinan Diamond Mine in November 2003 in celebration of its centenary. The mine rose to prominence in 1905, when the Cullinan Diamond – the largest rough diamond of gem quality ever found – was discovered there. The mine has produced over 750 stones that are greater than 100 carats (20 g) and more than a quarter of all the world's diamonds that are greater than 400 carats (80 g). It is also the only significant source of blue diamonds in the world.

Asset forfeiture or asset seizure is a form of confiscation of assets by the authorities. In the United States, it is a type of criminal-justice financial obligation. It typically applies to the alleged proceeds or instruments of crime. This applies, but is not limited, to terrorist activities, drug-related crimes, and other criminal and even civil offenses. Some jurisdictions specifically use the term "confiscation" instead of forfeiture. The alleged purpose of asset forfeiture is to disrupt criminal activity by confiscating assets that potentially could have been beneficial to the individual or organization. In 2014 law enforcement took more property than burglars did from American citizens.

De Grisogono was a Swiss luxury jeweller. It was founded in Geneva, Switzerland, in 1993 by Lebanese-Italian black diamond specialist Fawaz Gruosi The Italian name Grisogono is derived from the Latin Chrysogonus which comes from the Greek Chrysogonos χρῡσό-γονος, meaning "begotten of gold".

Joseph Lau Luen Hung is a Hong Kong billionaire. He owns a 61% stake in Chinese Estates Holdings and his fortune is estimated by Forbes at $17.4 billion as of July 2020. He is a convicted felon and fugitive in Macau. 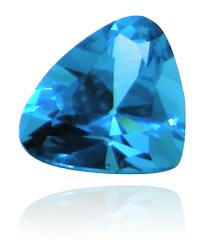 The Nassak Diamond is a large, 43.38 carats (8.676 g) diamond that originated as a larger 89 carat diamond in the 15th century in India. Found in Golconda mines of Kollur and originally cut in India, the diamond was the adornment in the Trimbakeshwar Shiva Temple, near Nashik, in the state of Maharashtra, India from at least 1500 to 1817. The British East India Company captured the diamond through the Third Anglo-Maratha War and sold it to British jewellers Rundell and Bridge in 1818. Rundell and Bridge recut the diamond in 1818, after which it made its way into the handle of the 1st Marquess of Westminster's dress sword. 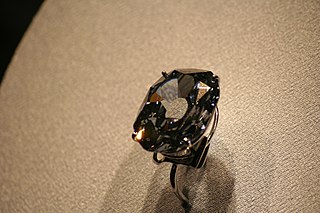 The Wittelsbach-Graff Diamond is a 31.06-carat (6.212 g) deep-blue diamond with internally flawless clarity originated from the Kollur Mine, India. Laurence Graff purchased the Wittelsbach Diamond in 2008 for £16.4 million. In 2010, Graff revealed he had had the diamond cut by three diamond cutters to remove flaws. The diamond was now more than 4 carats (800 mg) lighter and was renamed the Wittelsbach-Graff Diamond. There is controversy, as critics claim the recutting has so altered the diamond as to make it unrecognisable, compromising its historical integrity.

The Marange diamond fields are an area of widespread small-scale diamond production in Chiadzwa, Mutare District, Zimbabwe. 'Although estimates of the reserves contained in this area vary wildly, some have suggested that it could be home to one of the world's richest diamond deposits'. The hugely prolific fields are regarded by some experts as the world's biggest diamond find in more than a century. Production from Marange is controversial due to ongoing legal wrangles and government crackdowns on illegal miners and allegations of forced labour. In terms of carats produced, the Marange field is the largest diamond producing project in the world, estimated to have produced 16.9 million carats in 2013, or 13% of global rough diamond supply. Marange is estimated to have produced 12.0 million carats in 2012, 8.7 million carats in 2011, and 8.2 million carats in 2010. While some diamond mines produce rough valued at over $1000 per carat, average production at Marange is estimated at under $50 per carat.

The Bahia Emerald is one of the largest emeralds and contains the largest single shard ever found. The stone, weighing approximately 752 lb (341 kg) originated from Bahia, Brazil and is emerald crystals embedded in host rock. It narrowly escaped flooding during Hurricane Katrina in 2005 during a period of storage in a warehouse in New Orleans. There was an ownership dispute after it was reported stolen in September 2008 from a secured vault in South El Monte in Los Angeles County, California. The emerald was located and the case and ownership has been settled. The stone has been valued at some $400 million, but the true value is unclear.

The Portuguese Diamond is a large octagonal-cut diamond known for its flawlessness and clarity. It weighs 127.01 carats (25.402 g).

The Archduke Joseph is a colorless, antique cushion-shaped brilliant, originally weighing 78.54 carat, purchased by Molina Jewelers of Arizona sometime in the late-1990s and slightly re-cut to 76.45 carat to improve clarity and symmetry. It is, on the Gemological Institute of America (GIA) color and clarity scales, a D grade, IF diamond and the largest DIF ever graded at the GIA; and it is of type IIa.

Nirav Deepak Modi is an fugitive Indian businessman, charged by Interpol and the Government of India for criminal conspiracy, criminal breach of trust, cheating and dishonesty including delivery of property, corruption, money laundering, fraud, embezzlement and breach of contract in August 2018. Modi is being investigated as a part of the $2 billion fraud case of Punjab National Bank (PNB) and is also being sued in the State of California for US$4.2 million for defrauding Los Angeles entrepreneur, Paul Alfonso, over two custom diamond engagement rings that turned out to be lab diamonds. In March 2018, Modi applied for bankruptcy protection in Manhattan, New York. In June 2018, Modi was reported to be in the UK where he reportedly applied for political asylum in Britain. In June 2019, Swiss authorities froze a total of 6 million US dollars present in Nirav Modi's Swiss bank accounts along with the assets.

Blue diamond is a type of diamond which exhibits all of the same inherent properties of the mineral except with the additional element of blue color in the stone. They are colored blue by trace amounts of boron that contaminate the crystalline lattice structure. Blue diamonds belong to a subcategory of diamonds called fancy color diamonds, the generic name for diamonds that exhibit intense color.

Pink diamond is a type of diamond that has pink color. The source of their pink color is greatly debated in the gemological world but it is most commonly attributed to enormous additional pressure that these diamonds undergo during their formation.