Last updated May 14, 2021
For other uses, see Gulistan (disambiguation).
Province of Iran
Province in Region 1, Iran

Golestān Province (Persian : استان گلستان‎, Ostān-e Golestān) is one of the 31 provinces of Iran, located in the north-east of the country south of the Caspian Sea. Its capital is Gorgan.

The province was put as part of Region 1 upon the division of the provinces into 5 regions solely for coordination and development purposes on 22 June 2014. [1] Majority of its population are Sunni Muslims. [5] [6]

Golestān was split off from the province of Mazandaran in 1997. It has a population of 1.8 million (2016) [7] and an area of 20,380 km2. The province is divided into the following twelve counties (shahrestans): Aliabad County, Aqqala County, Azadshahr County, Bandar-e Gaz County, Gonbad-e Qabus County, Gorgan County, Kalaleh County, Kordkuy County, Maraveh Tappeh County, Minudasht County, Ramian County, and Torkaman County. Present-day Gorgan was called Esterabad until 1937.

Its capital, Gorgan, derives its name from a wider region known historically as Gorgân ( گرگان ), Middle Persian Gurgān, and Old Persian Varkāna (in the Behistun Inscription) meaning "land of wolves". [8] This is also the root of the Ancient Greek Ὑρκανία (Hyrkanía) and Latin Hyrcania. Wild wolves are still found in Golestan.

Human settlements in this area date back to 10,000 BC. Evidence of the ancient city of Jorjan can still be seen near the current city of Gonbad-e Kavus. It was an important city of Persia located on the Silk Road.

Under the Achaemenid Iran, it seems to have been administered as a sub-province of Parthia and is not named separately in the provincial lists of Darius and Xerxes. The Hyrcanians, however, under the leadership of Megapanus, are mentioned by Herodotus [9] in his list of Xerxes' army during the invasion of Greece. [8]

In 2006, the Ministry of Education of Iran estimated the ethnic breakdown of the province to be:

Apparently, the Mazandaranis who inhabit the foothills all the way to Shah Pasand were subsumed under the rubric "Persian" by this official statistics.

The Persians and Mazandaranis are considered by nearly all inhabitants of the province to be "the old natives" while all others are considered ethnic immigrants in the past.

The Turkmens reside in the north of the province, a plain called Turkmen Sahra. From the 15th century, these formerly nomadic people have lived in this area, the main cities of which are Gonbad-e Kavus and Bandar Torkaman. Turkmens are Muslim and follow the Hanafi school of Sunni interpretation. They are a sizable minority at cities such as Gorgan, Ali Abad, Kalaleh and many of eastern townships.

Azeris and the Qizilbash predate the Turkmen by centuries and have in time become completely Shia, and therefore, culturally associate with the Persians and other Shias.

The Sistani Persians and the Baluch are relatively of recent arrival and date back to the early 20th century. They are still arriving into the area in some numbers due to the lasting drought in their home areas of Sistan.

Other ethnic groups such as Kazakhs, Georgians, and Armenians also reside in this area, and have preserved their traditions and rituals.

The world's tallest brick tower, the Gonbad-e Qabus, stands in this province.

Golestān enjoys mild weather and a temperate climate most of the year. Geographically, it is divided into two sections: The plains, and the mountains of the Alborz range. In the eastern Alborz section, the direction of mountains faces northeast and gradually decreases in height. The highest point of the province is Shavar, with a height of 3,945 meters.

See also: Geography of Iran and Environmental issues in Iran

Golestan National Park in northern Iran is faced with the construction of a road through the forest, allegedly for the ease of traffic for villagers and woodmen but at the expense of losing the only national park in Iran throughout which a range of different climates (humid near the Caspian Sea and desert farther south) is spread.

Golestān National Park is Iran's biggest national park which spans three provinces, Golestan, Mazandaran and North Khorasan. Surprisingly, the authorities ignore repeated calls by experts to construct such roads around, instead of through, the forests, which in this way would no longer threaten the animal and plant life.

Gulistan or Golestan or Golastan is a Persian word and means "The Flower Land or The Antholand ". Gol= Flower, Estan or Ostan= Land

Bandar Torkaman, formerly known as Bandar Shah, is a city and capital of Torkaman County, Golestan Province, Iran. At the 2006 census its population was 45,045, in 9,755 families.

Turkmen Sahra is a region in the northeast of Iran near the Caspian Sea, bordering Turkmenistan, the majority of whose inhabitants are ethnic Turkmen. The most important cities of Turkmen Sahra are Gonbad, Aqqala, Kalaleh, Maraveh Tappeh, Gomishan and Bandar Torkaman. There are, according to Ethnologue, roughly 719,000 Turkmens in Turkmen Sahra today.

Gonbad-e Qabus County is a county in Golestan Province in Iran. Formerly called Gorgan or Jorjan, because of the ruins of the historical city called Gorgan, the capital of the Ziyarid dynasty, in its southwest corner. It was called Hyrcania in ancient times. The capital of the county is Gonbad-e Qabus, founded by German engineers and architectures with high urban engineering standards; by the order of Reza Pahlavi. At the 2016 census, the county's population was 348,744, in 97,147 families. The county consists of two districts: Dashli Borun District and Central District. The county has two cities: Incheh Borun and Gonbad-e Qabus.

Iranian Kazakhs live mainly in the Golestān Province in Northern Iran. According to ethnologue.org, however, there were 3000 Kazakhs living in Iran in 1982 in the city of Gorgan. The number of Iranian Kazakhs might have been slightly higher, because many of them returned to Kazakhstan after the dissolution of the Soviet Union, from where they had immigrated to Iran after the Bolshevik October Revolution (1917).

Kolijeh is a village in Atrak Rural District, Dashli Borun District, Gonbad-e Qabus County, Golestan Province, Iran. At the 2006 census, its population was 419, in 86 families.

Incheh Borun is a city and capital of Dashli Borun District, in Gonbad-e Qabus County, Golestan Province, Iran. At the 2006 census its population was 1,764, in 334 families.

Road 18 is a road in northern Iran in Golestan Province and Mazandaran Province. In Golestan it connects Maravehtapeh to Kalaleh, Gonbad-e Qabus, Bandar Torkaman and Bandar-e-Gaz. In Mazandaran, it runs concurrent with Road 22 until Neka, where it turns towards Caspian Sea coastline and runs parallel to it going through Babolsar, Fereydunkenar and ends at Mahmudabad

Eslamabad may refer to the following places in Iran:

Khorasani Turks are a Turkic ethnic group inhabiting part of North Khorasan, Razavi Khorasan and Golestan provinces of Iran, as well as in the neighboring regions of Turkmenistan up to beyond the Amu Darya River and speak Khorasani Turkic.

Ataabad is a village in Soltanali Rural District, in the Central District of Gonbad-e Qabus County, Golestan Province, Iran. At the 2006 census, its population was 152, in 26 families.

Jahan Nama is a village in Chaharkuh Rural District, in the Central District of Kordkuy County, Golestan Province, Iran. At the 2006 census, its population was 99, in 43 families. This area is situated in the southern heights of Gorgan and the southeast of Kord Kooy. In 1973, it was claimed as a protected place with 30,650 hectares in area. This region was a recreational area for people of Gorgan and its nearby villages. Some important regions like Torkat, Chalestan, Cholqoleh, Aq Reza, Chakel Geda, Landeh Kooh, Talou, Khoshdasti, Landou and Maqzi, are around this protected area. 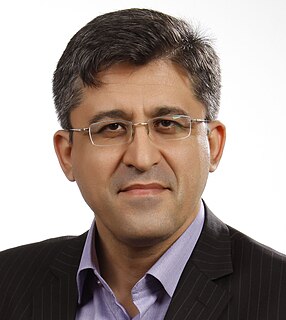 Ramin Nourqolipour is an Iranian Türkmen politician. He was a Member of Parliament and a member of reformists' Hope fraction in the Iranian Parliament. He was elected to the parliament to represent a west Golestan Province constituency including four electoral districts: Kordkuy, Turkmen, Bandargaz, and Gomishan. He represented a big part of Türkmen community of Iran in Iranian Parliament for four years between 2016-2020.

Located in the historic city of Gonbad-e Kavus, Gonbad Kavous University is the major higher education institution in the eastern part of Golestan Province, Iran. Officially accredited/recognized by the Ministry of Science Research and Technology, Iran, the University is a public and coeducational higher education institution and it offers courses and programs leading to officially recognized higher education degrees such as bachelor, Master and Ph.D. degrees in several areas of study. Gonbad Kavous University also provides several academic and non-academic facilities and services to students including a library, as well as administrative services.