Gonçalo alves is a hardwood (from the Portuguese name, Gonçalo Alves). It is sometimes referred to as tigerwood—a name that underscores the wood's often dramatic, contrasting color scheme, that some compare to rosewood.

While the sapwood is very light in color, the heartwood is a sombre brown, with dark streaks that give it a unique look. The wood's color deepens with exposure and age and even the plainer-looking wood has a natural luster.

Two species are usually listed as sources for gonçalo alves: Astronium fraxinifolium and Astronium graveolens , although other species in the genus may yield similar wood; the amount of striping that is present may vary. All trees grow in neotropical forests; Brazil is a major exporter of these woods. 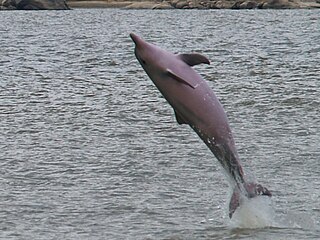 The tucuxi, alternatively known in Peru bufeo gris or bufeo negro, is a species of freshwater dolphin found in the rivers of the Amazon basin. The word tucuxi is derived from the Tupi language word tuchuchi-ana, and has now been adopted as the species' common name. Despite being found in geographic locations similar to those of 'true' river dolphins such as the boto, the tucuxi is not closely related to them genetically. Instead, it is classed in the oceanic dolphin family (Delphinidae). 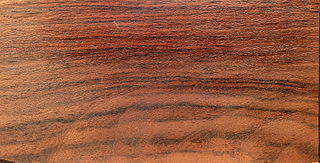 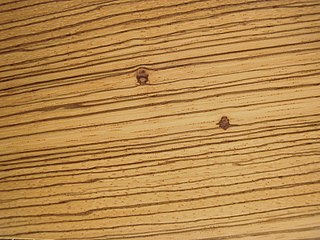 The name zebrawood is used to describe several tree species and the wood derived from them. Zebrawood is characterized by a striped figure that is reminiscent of a zebra. The name originally applied to the wood of Astronium graveolens, a large tree native to Central America. In the 20th century, the most important source of zebrawood was Microberlinia brazzavillensis, also called zebrano, a tree native to Central Africa. Other sources include Brazilian Astronium fraxinifolium, African Brachystegia spiciformis, Pacific Guettarda speciosa, and Asian Pistacia integerrima.

Tigerwood is a common name for lumber produced from several species of tropical trees:

Astronium fraxinifolium is a timber tree, which is native to Amazon Rainforest, Atlantic Forest, Caatinga, and Cerrado vegetation in Brazil. Common names include kingwood, locustwood, tigerwood, and zebrawood. It is known in Portuguese as Gonçalo-alves. This plant is cited in Flora Brasiliensis by Carl Friedrich Philipp von Martius. It is also used to make hardwood such as tigerwood. 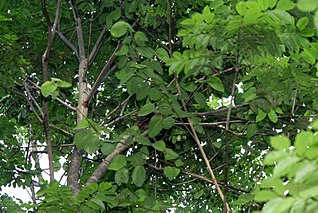 Astronium graveolens is a species of flowering tree in the cashew family, Anacardiaceae, that is native to the Yucatán Peninsula in Mexico, Central America, and South America as far south as Bolivia. Common names include glassywood, ronrón (Spanish), and aroeira (Portuguese). This plant is cited in Flora Brasiliensis by Carl Friedrich Philipp von Martius.

Astronium is a genus of flowering plants in the cashew family, Anacardiaceae. It is native to Central and South America.

Astronium lecointei is a timber tree, which is native to Brazil.

São Gonçalo do Pará is a municipality located in the center-west of Minas Gerais state, Brazil. The estimated population in 2020 was 12,597 inhabitants. The total area of the municipality is 265 km2 (102 sq mi) and the elevation is 750 m (2,461 ft). It is located at 129 km (80 mi) from state capital Belo Horizonte. São Gonçalo do Pará is the seat of the Regional Administration of the Upper São Francisco River. 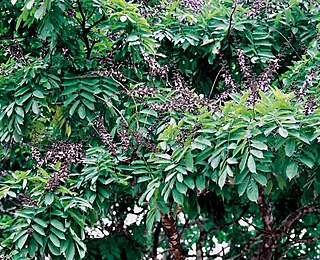 Millettia laurentii is a legume tree from Africa and native to the Republic of Congo, the Democratic Republic of Congo, Cameroon, Gabon and Equatorial Guinea. The species is listed as "endangered" in the IUCN Red List, principally due to destruction of its habitat and over-exploitation for timber. Wenge, a dark colored wood, is the product of Millettia laurentii. Other names sometimes used for wenge include African rosewood (ambiguous), faux ebony, dikela, mibotu, bokonge, and awong. The wood's distinctive color is standardised as a "wenge" color in many systems.

Botryosphaeria dothidea is a plant pathogen that causes the formation of cankers on a wide variety of tree and shrub species. It has been reported on several hundred plant hosts and on all continents except Antarctica. B. dothidea was redefined in 2004, and some reports of its host range from prior to that time likely include species that have since been placed in another genus. Even so, B. dothidea has since been identified on a number of woody plants—including grape, mango, olive, eucalyptus, maple, and oak, among others—and is still expected to have a broad geographical distribution. While it is best known as a pathogen, the species has also been identified as an endophyte, existing in association with plant tissues on which disease symptoms were not observed. It can colonize some fruits, in addition to woody tissues.

Alves is a small agricultural village in Moray, Scotland.

Gonçalo is a Portuguese masculine given name and family name.

Gonçalo Nuno Borges Ferreira Gomes Alves is a Portuguese former futsal player who played as a winger and defender.

Zebrawood refers to several trees and the wood derived from them, including: 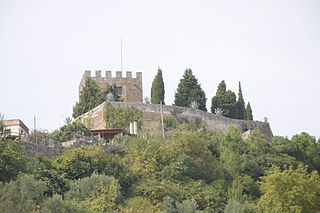 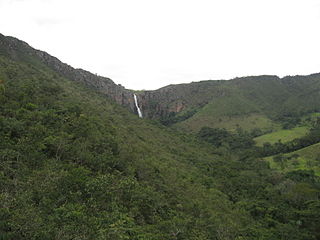 Cerradão is a type of dry forest found in Brazil, associated with the cerrado savanna ecoregion.

Marcelo Alves Santos, known as Marcelo Alves, is a Brazilian professional footballer who plays as a central defender for Vitória, on loan from Madureira.