Goodenow Grove Nature Preserve is a unit of the Forest Preserve District of Will County located in Crete Township in Will County, Illinois. The closest town is Crete, Illinois. The preserve covers 898 acres (3.63 km2) and contains 4 miles (6.4 km) of trails and a man-made 40-foot (12 m) hill which is a sledding hill in the winter. [1]

Goodenow Grove Nature Preserve contains mostly woods, but has some prairie. It is moderately hilly with one small pond. Plum Creek crosses the preserve.

Amenities include primitive campsites, picnic shelters available for reservation, and an ice-skating pond when conditions allow. [1]

In 1996, Goodenow Grove was dedicated as a State Nature Preserve for its diverse ecosystems, including forests, floodplain, seeps, savanna, prairies, meadows, and marshes. The nature preserve provides protection for the habitat of state-threatened or endangered species, including the eastern massasauga rattlesnake, the spotted coral root orchid, and more. [1]

The nature preserve features the Plum Creek Nature Center, one of several nature centers and visitor centers operated by the Forest Preserve District of Will County. The Center features hands-on nature exhibits. Outside there is a natural playscape for outdoor educational experiences including a pollinator garden, rain garden and interactive play elements. There is also a bird observation area, including birdhouses fitted with "Spy-On-A-Bird" cameras.

Will County is a county in the northeastern part of the state of Illinois. According to the 2010 census, it had a population of 677,560, an increase of 34.9% from 502,266 in 2000, making it Illinois's fourth-most populous county. The county seat is Joliet. Will County is one of the five collar counties of the Chicago-Naperville-Elgin, IL-IN-WI Metropolitan Statistical Area. The portion of Will County around Joliet uses the 815 and 779 area codes, 630 and 331 are for far northern Will County, and 708 is for central and eastern Will County.

Lake County is situated in the northeastern corner of the U.S. state of Illinois, along the shores of Lake Michigan. According to the 2010 census, it has a population of 703,462, making it the third-most populous county in Illinois. Its county seat is Waukegan, the tenth-largest city in Illinois. The county is primarily suburban, with some urban areas and some rural areas. Due to its location, immediately north of Cook County, Lake County is one of the collar counties of the Chicago metropolitan area. 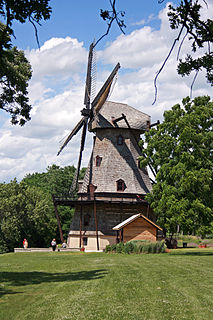 Kane County is a county in the U.S. state of Illinois. According to the 2010 census, it has a population of 515,269, making it the fifth-most populous county in Illinois. Its county seat is Geneva, and its largest city is Aurora. Kane County is one of the collar counties of the metropolitan statistical area designated "Chicago–Naperville–Elgin, IL–IN–WI" by the US Census. 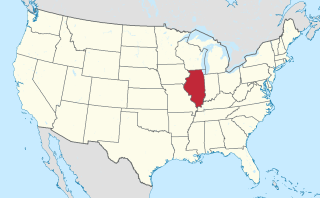 Crete is a village in Will County, Illinois, United States. The population was 8,259 at the 2010 census. Originally named Wood's Corner, it was founded in 1836 by Vermonters Dyantha and Willard Wood.

Funks Grove is a historic unincorporated community on U.S. Route 66 in McLean County, Illinois, United States, southwest of Bloomington. The grove for which the settlement is named, Funk's Grove, is a National Natural Landmark.

Pioneers Park Nature Center, established in 1963, is a 668-acre (2.70 km2) nature preserve located at the intersections of South Coddington and West Van Dorn Streets in Lincoln, Nebraska and is operated by the Lincoln Parks and Recreation Department.

Goodenow, is an unincorporated community in Will County, Illinois, United States.

Thorn Creek Woods Nature Center and Preserve is located in Will County, Illinois, near the municipality of Park Forest, Illinois. It is part of the Forest Preserve District of Will County. The entranceway to Thorn Creek Woods Nature Preserve is located at 247 Monee Road, approximately 0.25-mile (400 m) north of Stunkel Road, in Park Forest. The preserve is open 8:00 a.m. - dusk daily; the Nature Center is open 12:00 - 4:00 p.m. Friday- Sunday. At 830 acres (3.4 km2), Thorn Creek Nature Preserve lies at the headwaters of Thorn Creek and consists of bottomlands, ravines, and white-oak forests interspersed with marsh and meadows. The actual nature center is located inside of an old church right off Monee Road. It is two stories and contains a nature library and nature exhibits. The trail starts behind the church and heads east into the woods. The topography varies. The trail starts off on high land before dropping down into the Thorn Creek River Valley. It then crosses the creek and goes up and out of the valley, again. The terrain is pretty rugged, especially near the river and its tributaries, because they have cut many gorges and ravines.

Lake Cook Road is a major east–west highway in Cook, Lake, McHenry, and Kane Counties in Illinois. For much of its length, it marks the border between Cook and Lake Counties, hence the name of the road. In its western stretch, it marks the border between McHenry and Cook Counties, and further west, McHenry and Kane Counties. The road is approximately 25.5 miles (41.0 km) in length, from its western terminus at Illinois Route 62 in Algonquin to its eastern terminus at Sheridan Road in Highland Park and Glencoe, near Lake Michigan. The road is notable for its cross-section of Chicago's northern suburbs, balancing densely developed commercial, industrial, and residential land uses, with open space areas such as forest preserves, parks, golf courses, creeks, rivers, gardens, and Lake Michigan.

Waterfall Glen Forest Preserve is a forest preserve in southern DuPage County, Illinois. It is known for its waterfall, which actually is a dam, which is in its ravine. It completely surrounds Argonne National Laboratory. It is also home to a popular model airplane field, located in the southwest section of the forest preserve. Hikers can also make the interior trip to St. Patrick Cemetery nestled deep in the preserve. The 2,492-acre Waterfall Glen Forest Preserve in Darien is an ecological parcel of open space within the Forest Preserve District of DuPage County. Waterfall Glen's prairies, savannas, and oak-maple woodlands contain 740 native plant species, 75 percent of all the plants known to grow naturally in DuPage County. There are over 300 species of mammals, birds, fish, amphibians, and reptiles and another 300 of invertebrates use the forest preserve either year-round or during their migrations.