His film appearances include Chance of a Lifetime and The Silent Passenger , but he is best known for his recurring appearance as the character Claud Eustace Teal in films such as The Saint Meets the Tiger . [4]

James Michael Burke was an American film and television actor born in New York City. He made his stage debut in New York around 1912 and went to Hollywood in 1933. He made over 200 film appearances during his career between 1932 and 1964. He was often cast as a police officer, usually a none-too-bright one, such as his role as Sergeant Velie in Columbia Pictures' Ellery Queen crime dramas in the early 1940s. Burke can also be seen in The Maltese Falcon, At the Circus, Lone Star, and many other films. One of his memorable roles is his portrayal of a rowdy rancher in the 1935 comedy Ruggles of Red Gap.

John Eldredge was an American actor from San Francisco. He was the younger brother of character actor George Eldredge (1898–1977). 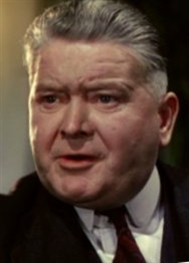