Solie was born on January 29, 1929 in Minneapolis, Minnesota. He moved to Tampa, Florida, in the 1950s after completing military service in the United States Air Force. During his secondary school years at Southwest High, he chose radio as a major and went by the nickname "Josie". He ran the school PA system and participated in several high school productions and drama workshops at local radio stations.

Early in his career, Solie worked as a stringer. He learned about stock car racing by competing as an amateur chauffeur on Florida's Suncoast and announcing outdoors at tracks around the United States. He conducted radio interviews with other stock car drivers and boxers, and in his spare time, visited libraries to learn about the human anatomy. [2]

Solie began his pro wrestling career as a ring announcer, making $5 a night emceeing weekly shows in the Tampa Bay area, learning about the sport from John Heath, Eddie Graham, and Don Curtis. [3] He soon began working for Championship Wrestling from Florida, and in 1960, he moved into the broadcast booth to become the lead announcer for CWF's Saturday morning television shows, a spot he would occupy for the next quarter-century. During that time, he commentated on matches featuring some of pro wrestling's biggest legends, including WWE Hall of Famer Dusty Rhodes, The Brisco Brothers and Dory Funk Jr., among numerous others. Solie rose to national prominence when Superstation WTBS began broadcasting pro wrestling, and the exposure helped him branch out, leading to Solie working for promotions in Georgia, Alabama and Puerto Rico. A technique that Solie used was when he wasn't speaking words into a microphone, he actually recorded them on paper for remembering.

Much of his fame stems from the gravelly sound of his voice calling the in-ring action and his unique lingo, and is often called "The Walter Cronkite of Wrestling". He sometimes is incorrectly credited for originating the term "Pier-Six Brawl" [4] to describe a wild brawl, and was also notorious for noting when a bloodied superstar was "wearing a crimson mask." His oft-imitated signature call of a suplex as a "su-play." His signature sign-off was: "So long from the Sunshine State," followed by a wink.

In 1987, a board game, Gordon Solie's Championship Wrestling Trivia Game, was released by Sports Entertainment International, Inc. [5] Solie eventually entered wrestling myth, and often stayed out of angles, but lots of them became historic once he was involved. One such angle was in Georgia when the Magnificent Muraco confronted Solie, threatening to hurt him. Solie’s broadcast partner Roddy Piper saved Solie, turning babyface in the process. [6] [7]

According to wrestling lore, Solie had wrestlers that he was interviewing place him in holds so he could understand them better and call them more realistically, because he wanted to learn how it felt to be on the defensive end of a hold. He also made a point to never learn a wrestler or manager’s real name because he wanted to avoid making the mistake of calling someone by any name other than the persona in which they were working. [8] Solie called matches at a time when fans were uncertain whether matches were predetermined or not and helped maintain this illusion because of his announcing style. [9] Following the folding of CWF in 1987, Solie returned to Georgia and became one of the lead announcers for the NWA (National Wrestling Alliance) later WCW television programs. Solie was once asked to join the World Wrestling Federation but declined the offer as the company wanted him to wear a tuxedo. [10] Solie also worked for the Continental Wrestling Federation and USA Championship Wrestling based out of Knoxville.

That was a natural transition for "The Dean," who had also been Georgia Championship Wrestling's lead announcer before it became a subsidiary of NWA/WCW. He remained there until his eventual retirement in 1995; the last event he appeared in was the 1995 Slamboree. Following his retirement from the sport, he stated in a 1999 interview: "It's getting too suggestive, the themes are in poor taste and usually outright disgraceful, they don't know a wristwatch from a wristlock. Whatever happened to wrestling?" [11]

Solie's last announcing job was to be the Heroes of Wrestling pay-per-view in 1999, but he could not attend due to failing health. He was diagnosed with cancer soon after his retirement, and in the late-1990s, his vocal chords were removed due to throat cancer. He died of the disease on July 27, 2000, at the age of 71. In 2005, Florida Media, Inc. published a collection of Solie's short stories and poetry in Gordon Solie ... Something Left Behind. [12] Solie was survived by his five children Pam, Jonard, Denise, Greg, and Eric. His crypt is located at Garden of Memories Cemetery in Tampa, Florida. [13]

In 2005, Solie's posthumously released memoir Gordon Solie ... Something Left Behind became a best-seller. On March 29, 2008, Jim Ross posthumously inducted Solie into the WWE Hall of Fame in the Class of 2008; appearing on Solie's behalf were his five children, Pam, Danise, Jonard, Eric and Greg. [14] Later the same year WWE's WWE Classics on Demand video service began offering The Film Room with Gordon Solie, hosted by Ross, focusing on Solie's announcing and interviewing of a specific wrestler or group of wrestlers involved in a feud. On August 11, 2009 Solie's biography, The Solie Chronicles was released by Crowbar Press. 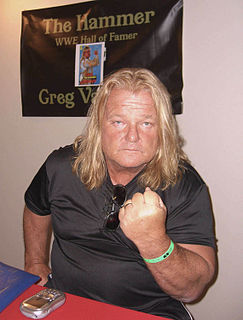 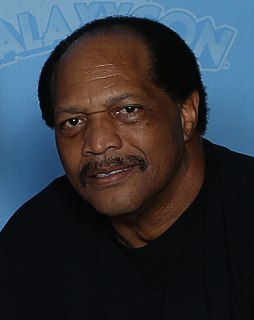 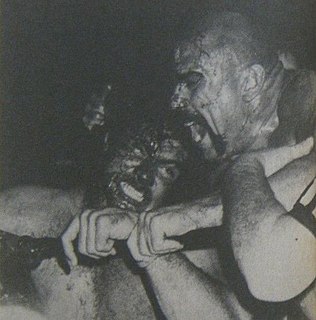 Don Muraco is an American retired professional wrestler. He is best known for his appearances with the World Wrestling Federation from 1981 to 1988, where he held the WWF Intercontinental Heavyweight Championship on two occasions and was crowned the inaugural winner of the King of the Ring tournament in 1985. He was inducted into the WWE Hall of Fame class of 2004 and the Professional Wrestling Hall of Fame in 2014.

Kevin Francis Sullivan is an American professional wrestler and booker, perhaps best known for his role in World Championship Wrestling. 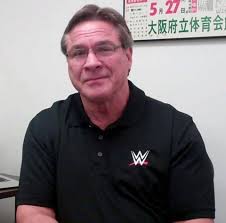 Paul Worden Taylor III is an American retired professional wrestler better known by his ring name Terry Taylor and for his time as an in-ring performer in National Wrestling Alliance, World Championship Wrestling, and World Wrestling Federation/Entertainment. From 2003 until 2011, he worked as a road agent, trainer, interviewer and the director of talent relations in Total Nonstop Action Wrestling. Since 2012, Taylor has worked as a trainer in WWE's developmental territory, NXT.

The World Championship Wrestling (WCW) Hall of Fame was an American professional wrestling hall of fame maintained by World Championship Wrestling (WCW). It was established in 1993 to honor wrestlers who began their careers long before the 1990s, mostly alumni of the National Wrestling Alliance (NWA) and Jim Crockett Promotions (JCP), the predecessors of WCW. Inductees received commemorative plaques that had their names & portraits inscribed on them. Wrestlers were inducted by Gordon Solie, a senior commentator in professional wrestling, and received their plaque during the "Legends Reunion" segment at WCW's May pay-per-view event, Slamboree. The WCW Hall of Fame was the second hall of fame established to honor professional wrestlers, after the creation of the World Wrestling Federation (WWF) Hall of Fame in February 1993. After the 1995 Hall of Fame ceremony, WCW stopped the production of the Hall of Fame without a formal announcement. In 2001, the WWF acquired all of its assets; this led to the formal stoppage of the WCW Hall of Fame. The WWF, however, stopped producing its Hall of Fame ceremony after 1996. In 2004, World Wrestling Entertainment (WWE), the WWF's successor, reinstated the WWE Hall of Fame, which included inductees that were alumni of WWE, NWA, JCP, and WCW. 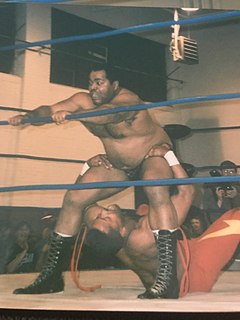 Pezavan Whatley was an American professional wrestler who was active in the 1980s up until the mid-1990s and is best known for his time with NWA Mid-America.

Edward F. Gossett, better known as Eddie Graham, was an American professional wrestler. He was also the promoter and booker for Championship Wrestling from Florida and President of the NWA in the 1970s.

The National Wrestling Alliance (NWA) Hall of Fame is an American professional wrestling hall of fame maintained by the NWA. It was established in 2005 to honor select wrestling personalities, mostly alumni of the NWA. Inductees receive commemorative medals that have their names inscribed on it with the logo of the NWA.

Superstars of Wrestling is a nationally syndicated professional wrestling television program that aired throughout the United States from 1986 to 1992. Created and produced by Joe Pedicino, the series broadcast eight hours of wrestling from around the country and was the first to provide national coverage of both the National Wrestling Alliance and international promotions. It was also the earliest U.S. television show to regularly broadcast Japanese puroresu and joshi wrestling as part of the Fuji Television Network's efforts to develop a market in the American television industry.