Gordon Tullock ( /ˈtʌlək/ ; February 13, 1922 – November 3, 2014) was an economist and professor of law and Economics at the George Mason University School of Law. He is best known for his work on public choice theory, the application of economic thinking to political issues. He was one of the founding figures in his field. [1]

A native of Rockford, Illinois and graduate of Rockford Central High School, Tullock attended the University of Chicago and, after a break for military service during World War II, received a J.D. in 1947. Following a brief period in private practice, he joined the Foreign Service that fall. After completing training, he was posted to Tianjin, China, later receiving Chinese language instruction at Yale and Cornell and follow-on postings to Hong Kong and Korea. He resigned from the Foreign Service in 1956. [2] While he originally intended to pursue a career as a foreign trader in the Far East, his work on The Politics of Bureaucracy eventually led him to begin collaboration with James M. Buchanan at the University of Virginia while Tullock worked at the University of South Carolina teaching international studies. [3]

Tullock's collaboration with Buchanan produced The Calculus of Consent: Logical Foundations of Constitutional Democracy (1962), which quickly became a seminal work in the new field of public choice. He later joined Buchanan as a faculty colleague at Virginia. For four years Buchanan and Tullock continued their research program, even founding a new journal for their field (1966), first called Papers in Non-Market Economics and eventually titled Public Choice, where they invited articles applying economic theory to all sorts of non-market phenomena, especially in the realm of government and politics. Despite the success of the book and the journal, disagreements with the UVA administration eventually led Tullock to leave.

In 1967, Tullock identified many of the concepts of what came to be known as rent-seeking in a seminal paper. [4]

Tullock moved to Virginia Polytechnical Institute (VPI, now called Virginia Tech) in 1968 and was joined by Buchanan a year later. There they continued the Public Choice Society and the journal, of which Tullock remained editor until 1990. At VPI, Tullock wrote a number of influential articles and books, including Private Wants, Public Means (1970), The Logic of the Law (1971), The Social Dilemma (1974), and The Vote Motive (1976).

Tullock developed a theory referred to as rent-seeking. Rent seeking, according to public choice theory, is securing profits through the political process rather than the market process of exchange. An example of rent seeking is when a firm, union, or special-interest group lobbies political actors (e.g. politicians or bureaucrats) to influence legislation in a beneficial manner. This can lead to moral hazard when politicians make policy decisions based on the lobby instead of the efficiency of the policy.

Tullock also formulated and considered the Tullock paradox, namely, the paradox of why rent-seeking is so cheap.

The name "Tullock's spike" refers to a thought experiment in which Tullock suggested that if governments were serious about reducing road casualties, they should mandate that a sharp spike be installed in the center of each car's steering wheel, to increase the probability that an accident would be fatal to the driver. Tullock's idea was that the normal process of risk compensation would then lead to safer driving by the affected drivers, thereby actually reducing driving fatalities. [5] [6]

His book, The Politics of Bureaucracy, has been criticized for overlooking a substantial body of literature. [8] A number of authors have criticized Tullock and the public choice tradition as being too simplistic in its explanation of political behavior. [9]

Logrolling is the trading of favors, or quid pro quo, such as vote trading by legislative members to obtain passage of actions of interest to each legislative member. In organizational analysis, it refers to a practice in which different organizations promote each other's agendas, each in the expectation that the other will reciprocate. In an academic context, the Nuttall Encyclopedia describes logrolling as "mutual praise by authors of each other's work". 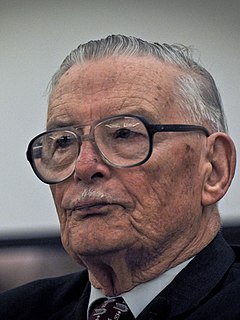 The Calculus of Consent: Logical Foundations of Constitutional Democracy is a book published by economists James M. Buchanan and Gordon Tullock in 1962. It is considered to be one of the classic works from the discipline of public choice in economics and political science. This work presents the basic principles of public choice theory.

G. Warren Nutter was an American economist, who was known primarily for his work on political economy, industrial concentration, price theory, and Soviet economic history and for cofounding the "Virginia school of political economy."

The Virginia School of political economy is a school of economic thought originating in universities of Virginia in the 1950s and 1960s, mainly focusing on public choice theory, constitutional economics, and law and economics. 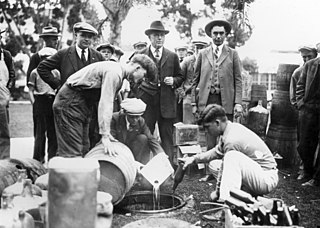 Bootleggers and Baptists is a concept put forth by regulatory economist Bruce Yandle, derived from the observation that regulations are supported both by groups that want the ostensible purpose of the regulation, and by groups that profit from undermining that purpose. 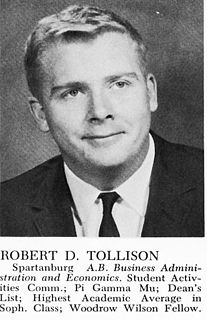 Robert D. Tollison was an American economist who specialized in public choice theory.

Richard Edward Wagner is an American economist. He is professor of economics at George Mason University. He works primarily in the fields of public finance and public choice.

Gordon L. Brady is an American Economist, Professor and Writer and resides in Vienna, Virginia. 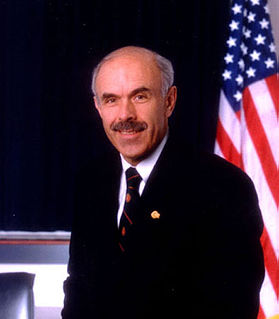 Jeff Ray Clark is an American economist specializing in public finance, public choice, and managerial economics. He is the Scott L. Probasco, Jr. Chair of Free Enterprise at the University of Tennessee at Chattanooga.

Francesco Parisi is a legal scholar and economist, working primarily in the United States and Italy. He is the Oppenheimer Wolff & Donnelly Professor of Law at the University of Minnesota Law School and Distinguished Professor of Economics at the University of Bologna. Parisi specializes in the economic analysis of law. His research uses formal models and technical results in areas from international law to behavioral law and economics to tort law.