Last updated May 12, 2021
"Gorean" redirects here. It is not to be confused with Goryeo or Koreans.

Gorean subculture is a fandom based on the philosophy espoused in John Norman's long-running sword and planet novel series Chronicles of Counter-Earth . [1] [2]

Gorean subculture developed independently of Norman's involvement, particularly starting as a fan network after the publishing houses ceased printing new paperback editions of the novels, allegedly due to the controversy and pressure from feminist circles, and the Gor books went out of print in the late 1980s [3] (trade paperback and e-book sequel novels were subsequently published from 2001 to 2016). It does not have a uniform following, but encompasses different groups of varying views and practices.

Although Norman's philosophy is concerned with the "order of nature" in a universal context of power and subordination, the Gorean subculture particularly focuses on the master-and-slave dynamic in sexual relationships and associated forms of female submission as portrayed in the novels. Therefore, although they are estimated to compose less than 5% of the total female population on Gor, [4] training and keeping a female slave (often known as a kajira ) is central to Gorean subculture. Formal slave training, slave positions and commands, as well as slave attire and beautification, are practices central in the Gorean subculture.

Starting from the 1990s, Gorean subculture has become attractive to a number of male teenagers through role playing in chat rooms. The teenage role-playing Goreans who concealed many of their personal aspects such as age or lack of experience, thanks to anonymity, managed to appeal to a considerable number of married and middle-aged women as kajirae in role-playing contexts. [9] Such notoriety caused by this profile and related practices in the virtual Gorean community succeeded in creating disdain among both feminists and the BDSM community. [9] Nevertheless, scholars have discussed the way that Gorean subculture groups on media such as Second Life and Internet Relay Chat have influenced the development of online role-playing and even the MMORPG genre. [10] 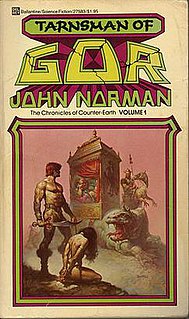 Gor is the fictional setting for a series of sword and planet novels written by philosophy professor John Lange, writing as John Norman. The setting was first described in the 1966 novel Tarnsman of Gor. The series is inspired by science fantasy pulp fiction works by Edgar Rice Burroughs. It also includes erotica and philosophy content. The Gor series repeatedly depicts men abducting and physically and sexually brutalizing women, who grow to enjoy their submissive state. According to The Encyclopedia of Science Fiction, Norman's "sexual philosophy" is "widely detested", but the books have inspired a Gorean subculture. In particular, virtual simulations of role-playing Gorean communities in the video game Second Life are considered one of the most visible phenomena related to the Gorean subculture.

John Norman is the pen name of John Frederick Lange Jr., who is the author of the Gor series of science fantasy novels, and a professor of philosophy. 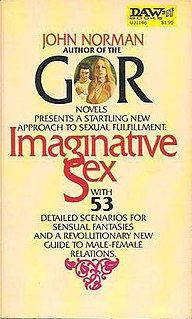 Imaginative Sex is a non-fiction book by John Norman which includes a list of male-dominant/female-submissive heterosexual BDSM-type sexual fantasy scenarios, and suggested guidelines as to how a couple can act them out in order to improve their sex life. 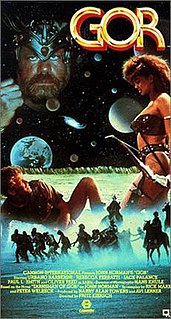 Gor is a 1987 science fiction and fantasy film based loosely on the 1966 novel Tarnsman of Gor, written by philosophy professor and author John Frederick Lange Jr. under his pen name John Norman. There was a sequel, Outlaw of Gor (1989).