The company received its first aircraft, an Airbus A320-200, in July 2017. It planned to start flights to the Caribbean using Airbus A330 aircraft in 2018, however in 2020 the company has not begun operation of any aircraft. [1] 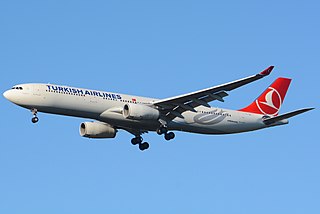 The Airbus A330 is a wide-body aircraft designed and produced by Airbus. Airbus conceived several derivatives of the A300, its first airliner in the mid-1970s. Then the company began development on the A330 twinjet in parallel with the A340 quadjet and launched both designs with their first orders in June 1987. The A330-300, the first variant, took its maiden flight in November 1992 and entered service with Air Inter in January 1994. The slightly shorter A330-200 variant followed in 1998.

Libyan Airlines, formerly known as Libyan Arab Airlines over several decades, is the flag carrier of Libya. Based in Tripoli, it operates scheduled passenger and cargo services within Libya and to Europe, North Africa and the Middle East, the majority of which leave from Tripoli International Airport. Benina International Airport in Benghazi serves as a secondary base. Libyan Airlines also operates Hajj services. The company is wholly owned by the government of Libya.

Société Tunisienne de l'Air, or Tunisair is the national airline of Tunisia. Formed in 1948, it operates scheduled international services to four continents. Its main base is Tunis–Carthage International Airport. The airline's head office is in Tunis, near Tunis Airport.

SriLankan Airlines is the flag carrier of Sri Lanka and a member airline of the Oneworld airline alliance. It is currently the largest airline in Sri Lanka by number of aircraft and destinations and was launched in 1979 as Air Lanka following the termination of operations of the original Sri Lankan flag carrier Air Ceylon. Following its partial acquisition in 1998 by Emirates, it was re-branded and the current livery was introduced. In 2008, the government of Sri Lanka acquired all the shares of the airline from Emirates. After ending the Emirates partnership, it retained its re-branded name and logo. SriLankan Airlines operates over 560 flights per week across Asia.

Afriqiyah Airways is a state-owned airline based in Tripoli, Libya. Before the 17 February 2011 revolution, it operated domestic services between Tripoli and Benghazi, and international scheduled services to over 25 countries in Europe, Africa, Asia and the Middle East; since the end of the war, it has been seeking to rebuild its business. Afriqiyah Airways' main base is technically Tripoli International Airport, although this was reported as closed in 2014 and flights are operating as best they can from other airports.

Edelweiss Air AG is a Swiss leisure airline and the sister company of Swiss International Air Lines. It operates flights to European and intercontinental destinations from its base at Zurich Airport.

IndiGo is an Indian low-cost airline headquartered in Gurugram, Haryana, India. It is the largest airline in India by passengers carried and fleet size, with a 59.24% domestic market share as of August 2020. It is also the largest individual Asian low-cost carrier in terms of jet fleet size and passengers carried, and the sixth largest carrier in Asia with over 6.4 crore passengers carried in financial year 2018–19. The airline operates 1,500 flights everyday to 87 destinations – 63 domestic and 24 international. It has its primary hub at IGI Airport, Delhi.

Brussels Airlines is the flag carrier and largest airline of Belgium, based and headquartered at Brussels Airport. It operates to over 100 destinations in Europe, North America, Africa and also offers charter services, maintenance and crew training. It is a member of the Star Alliance as well as the International Air Transport Association. The airline's IATA code SN is inherited from its predecessors, Sabena and SN Brussels Airlines. Brussels Airlines is part of the Lufthansa Group. The company slogan is We go the extra smile.

Comlux is an aviation company based in Switzerland, headquartered in Zürich. It provides services in fields of aircraft operations and charter management, aircraft sales and acquisitions, maintenance and upgrades.

Syphax Airlines was a scheduled airline with its head office and main base at Sfax–Thyna International Airport in Sfax, Tunisia. It served destinations in the Mediterranean.