Champion was born on June 22, 1919, in Geneva, Illinois, as the son of John W. Champion and Beatrice Carlisle. He was raised in Los Angeles, California, where he graduated from Fairfax High School. [1] He studied dance from an early age and, at the age of fifteen, toured nightclubs with friend Jeanne Tyler billed as "Gower and Jeanne, America's Youngest Dance Team". In 1939, "Gower and Jeanne" danced to the music of Larry Clinton and his Orchestra in a Warner Brothers & Vitaphone film short-subject, "The Dipsy Doodler" (released in 1940).

During the late 1930s and early 1940s, Champion worked on Broadway as a solo dancer and choreographer. After serving in the U.S. Coast Guard during World War II, Champion met Marjorie Belcher, who became his new partner, and the two were married in 1947.

In the early 1950s, Marge and Gower Champion made seven film musicals: Mr. Music (1950, with Bing Crosby), the 1951 remake of Show Boat (with Howard Keel and Kathryn Grayson), 1952's Lovely to Look At (a remake of Roberta , also with Keel and Grayson), the autobiographical Everything I Have Is Yours (1952), Give a Girl a Break (1953, with Debbie Reynolds and Bob Fosse), Jupiter's Darling (1955, with Keel and Esther Williams), and Three for the Show (1955, with Betty Grable and Jack Lemmon). All were made for Metro-Goldwyn-Mayer except Mr. Music (Paramount) and Three for the Show (Columbia).

Throughout the 1950s, they performed on a number of television variety shows, and in 1957 they starred in their own short-lived CBS sitcom, The Marge and Gower Champion Show, which was based on their actual career experiences.

Gower and Marge Champion appeared as the Mystery Guests on the May 15, 1955 airing of What's My Line . Mary Healy guessed who they were.

In 1948, Champion had begun to direct as well, and he won the first of eight Tony Awards for his staging of Lend an Ear, the show that introduced Carol Channing to New York City theater audiences. During the 1950s, he worked on only two Broadway musicals — choreographing Make a Wish in 1951 and directing, staging, and starring in 3 for Tonight in 1955 — preferring to spend most of his time in Hollywood. However, in the 1960s, he directed a number of Broadway hits that put him at the top of his profession.

He had a solid success in 1960 with Bye Bye Birdie , a show about an Elvis-like rock star about to be inducted into the army. The show starred relative unknowns Chita Rivera and Dick Van Dyke along with a youthful cast. It ran for 607 performances and won four Tony awards, including Best Musical and two for Champion's direction and choreography. Next came Carnival! in 1961, which ran for 719 performances and garnered seven Tony nominations, including one for Champion's direction. In 1964, Champion directed one of Broadway's biggest blockbusters, Hello, Dolly! . It ran for 2,844 performances — almost seven years! Starring Carol Channing as Dolly Levi, it is perhaps best remembered for the title number, where Dolly is greeted by the staff of a restaurant after having been away for years. The show won ten Tony Awards, including Best Musical, as well as two for Champion's direction and choreography.

Champion had his fourth consecutive hit musical with I Do! I Do! in 1966. It featured a cast of two — veterans Mary Martin and Robert Preston — playing a couple seen throughout the years of their marriage. The show ran for 560 performances and received seven Tony nominations, including one for Champion's direction.

His next show, The Happy Time in 1968, broke his streak. It had a relatively disappointing run of only 286 performances. This would be followed by many more disappointments and worse. In the 1970s, Champion directed minor hits ( Sugar in 1972 and the revival Irene in 1973), flops ( Mack & Mabel in 1974) and complete disasters ( Rockabye Hamlet — seven performances in 1976 — and A Broadway Musical , running only one night in 1978, not to mention Prettybelle , which closed out of town in 1971). On top of this, he and Marge were divorced in 1973.

After the failures of the previous decade, Champion was able to make a comeback with his longest-running show. In 1980, he choreographed and directed a stage adaptation of the movie classic, 42nd Street . It won the Tony for Best Musical, and Champion was nominated for his direction and choreography, winning for the latter. The show ran for 3,486 performances, but Champion did not live to see one, having died in the morning on opening day.

Champion was married in 1947 to actress Marjorie Celeste Belcher, who became famous as Marge Champion. Together, they had two sons: Blake and director Gregg Champion. They divorced in January 1973. [2] In 1976, he married Karla Russell.

He also has a star on the Hollywood Walk of Fame.

Champion was diagnosed in early 1979 with Waldenström's macroglobulinemia, a rare form of blood cancer, by his doctors at the Scripps Institute. He began treatment at Cedars of Lebanon Hospital in Los Angeles and was advised not to take on work. [3] Champion died at 10:00 a.m. on August 25, 1980, in Manhattan at Memorial Sloan-Kettering Cancer Center. [4]

Champion's death came only ten hours before the opening-night performance of 42nd Street, the Broadway musical he choreographed and directed. It would be his swan song, running nine years. Producer David Merrick asked Champion's family to withhold the news from everyone, including the show's cast, until after the opening performance. During the enthusiastic curtain calls, Merrick came onstage and made the announcement to the stunned cast and audience amidst the wild applause. "This is a very tragic moment," he said. "I'm sorry to have to report that today, Gower Champion died." [5] [6] [7] 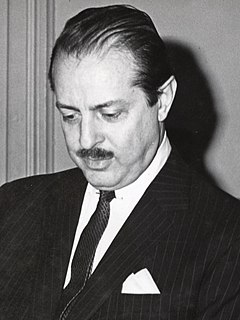 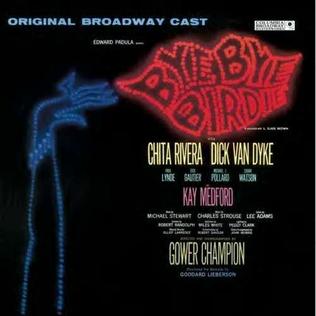 Bye Bye Birdie is a stage musical with music by Charles Strouse and lyrics by Lee Adams, based upon a book by Michael Stewart. 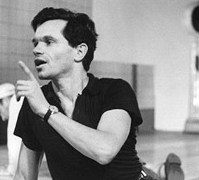 Thomas James Tune is an American actor, dancer, singer, theatre director, producer, and choreographer. Over the course of his career, he has won ten Tony Awards and the National Medal of Arts, and has his own star on the Hollywood Walk of Fame.

Michael Stewart was an American playwright and dramatist, librettist, lyricist, screenwriter and novelist. 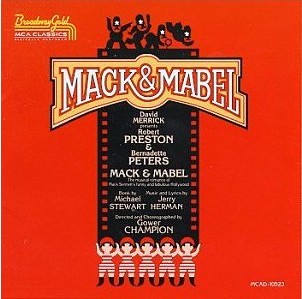 Mack and Mabel is a musical with a book by Michael Stewart and music and lyrics by Jerry Herman. The plot involves the tumultuous romantic relationship between Hollywood director Mack Sennett and Mabel Normand, who became one of his biggest stars. In a series of flashbacks, Sennett relates the glory days of Keystone Studios from 1911, when he discovered Normand and cast her in dozens of his early "two-reelers", through his creation of Sennett's Bathing Beauties and the Keystone Cops to Mabel's death from tuberculosis in 1930. 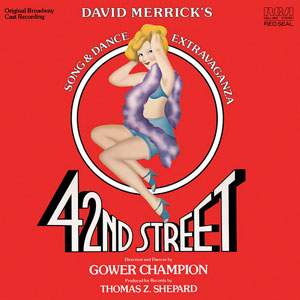 42nd Street is a 1980 stage musical with a book by Michael Stewart and Mark Bramble, lyrics by Al Dubin and Johnny Mercer and music by Harry Warren. The 1980 Broadway production won the Tony Awards for Best Musical and Best Choreography and it became a long-running hit. The show was also produced in London in 1984 and its 2001 Broadway revival won the Tony Award for Best Revival.

Chroniclers of the musical theater have been around for years, collecting pictorial surveys, librettos and scores, and recording the careers of various theatrical celebrities. Nothing in the American musical theater has been more inaccessible, however, than the record of its dance traditions, and there are many to recount.

Marjorie Celeste Champion was an American dancer and actress. At 14, she was hired as a dance model for Walt Disney Studios animated films. Later, she performed as an actress and dancer in film musicals, and in 1957 had a television show based on song and dance. She also did creative choreography for liturgy, and served as a dialogue and movement coach for the 1978 TV miniseries, The Awakening Land, set in the late 18th century in the Ohio Valley.

Michael Smuin was an American ballet dancer, choreographer and theatre director. He was co-founder and director of his own dance company, the Smuin Ballet in San Francisco.

Robert Longbottom is a New York City-based director, choreographer and director, primarily for theatre and opera.

This audio file was created from a revision of this article dated 3 October 2019 (2019-10-03), and does not reflect subsequent edits.
(Audio help  · More spoken articles)
This page is based on this Wikipedia article
Text is available under the CC BY-SA 4.0 license; additional terms may apply.
Images, videos and audio are available under their respective licenses.