Grójec [ˈɡrujɛt͡s] is a town in Poland. Located in the Masovian Voivodeship, about 40 kilometres (25 miles) south of Warsaw. It is the capital of urban-rural gmina Grójec and Grójec County. It has 16,674 inhabitants (2017). [1] Grójec surroundings are considered to be the biggest apple-growing area of Poland. It is said that the region makes up also for the biggest apple orchard of Europe. Statistically, every third apple sold in Poland is grown in Grójec – a unique local microclimate provides for their beautiful red colour. [2]

In November 1940, during the Nazi Occupation of Poland, German authorities established a Jewish ghetto in Grójec, [3] in order to confine its Jewish population for the purpose of persecution and exploitation. The ghetto was liquidated in February 1941, [3] when almost all of its inhabitants (5,200–6,000) were transported in cattle trucks to Warsaw Ghetto, the largest ghetto in all of Nazi occupied Europe with over 400,000 Jews crammed into an area of 1.3 square miles (3.4 km2). From there, most inmates were sent to Treblinka extermination camp. [4] [5] [6] [7] Only a group of Jewish craftsmen was left in Grójec, however, they were also annihilated in a mass execution in Dębówka, near Góra Kalwaria. 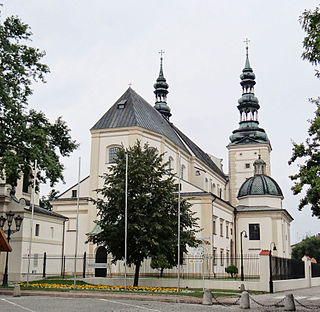 Otwock(listen) is a town in central Poland, some 23 kilometres (14 mi) southeast of Warsaw, with 42,765 inhabitants (2004). Otwock is a part of the Warsaw Agglomeration. It is situated on the right bank of Vistula River below the mouth of Swider River. Otwock is home to a unique architectural style called Swidermajer. 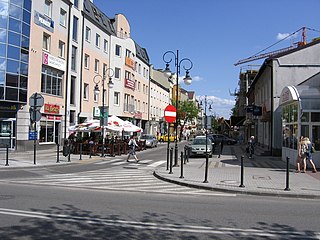 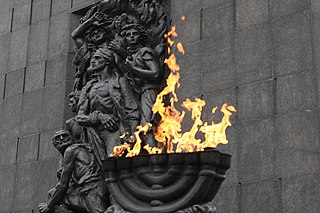 The history of Jews in Poland dates back at least 1,000 years. For centuries, Poland was home to the largest and most significant Jewish community in the world. Poland was a principal center of Jewish culture, because of the long period of statutory religious tolerance and social autonomy which ended after the Partitions of Poland in the 18th century. During World War II there was a nearly complete genocidal destruction of the Polish Jewish community by Nazi Germany and its collaborators, during the German occupation of Poland between 1939 and 1945, called the Holocaust. Since the fall of communism in Poland, there has been a renewed interest in Jewish culture, featuring an annual Jewish Culture Festival, new study programs at Polish secondary schools and universities, and the opening of Warsaw's Museum of the History of Polish Jews.

The Białystok Ghetto uprising was an insurrection in the Jewish Białystok Ghetto against the Nazi German occupation authorities during World War II. The uprising was launched on the night of August 16, 1943 and was the second-largest ghetto uprising organized in Nazi-occupied Poland after the Warsaw Ghetto Uprising of April–May 1943. It was led by the Anti-Fascist Military Organisation, a branch of the Warsaw Anti-Fascist Bloc. 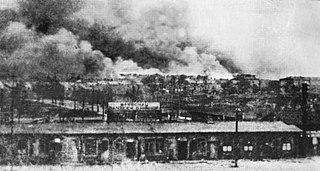 The Holocaust in Poland was part of the European-wide Holocaust organized by Nazi Germany and took place in German-occupied Poland. The genocide took the lives of three million Polish Jews, half of all Jews killed during the Holocaust. 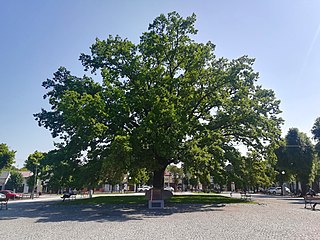 Głowno is a town and community in Poland, in Łódź Voivodeship, in Zgierz County, about 25 km northeast of Łódź. The town administratively belonged to the Łódź Voivodeship from 1975 to 1998. According to data from 2016, the city had 14,534 inhabitants. 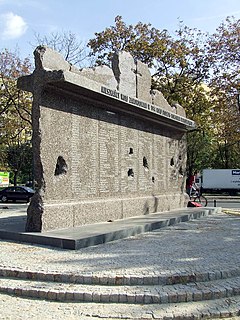 Crimes against the Polish nation committed by Nazi Germany and Axis collaborationist forces during the invasion of Poland, along with auxiliary battalions during the subsequent occupation of Poland in World War II, consisted of the murder of millions of ethnic Poles and the systematic extermination of Jewish Poles. The Germans justified these genocides on the basis of Nazi racial theory, which regarded Poles and other Slavic peoples as racially inferior Untermenschen and depicted Jews as a constant threat. By 1942, the Nazi Germans were implementing their plan to kill every Jew in German-occupied Europe, and had also developed plans to eliminate the Polish people through mass murder, ethnic cleansing, enslavement and extermination through labor, and assimilation into German identity of a small minority of Poles deemed "racially valuable". During World War II, the Germans not only murdered millions of Poles, but ethnically cleansed millions more through forced deportation to make room for “racially superior” German settlers. The genocides claimed the lives of 2.7 to 3 million Polish Jews and 1.8 to 2.77 million non-Jewish ethnic Poles, according to various sources such as Poland's Institute of National Remembrance. 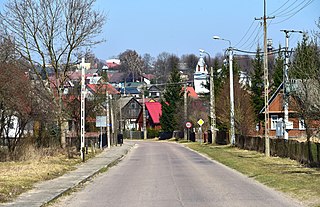 Krynkipronounced [ˈkrɨŋkʲi] is a town in northeastern Poland, located in Podlaskie Voivodeship along the border with Belarus. Krynki is famous for its history and its old buildings. It lies approximately 24 kilometres (15 mi) south-east of Sokółka and 45 km (28 mi) east of the regional capital Białystok. 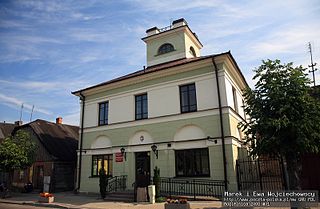 Mogielnica is a town in Grójec County in Masovian Voivodeship, Poland, with 2,475 inhabitants (2004) and an area of 141.56 square kilometres. It is the seat of Gmina Mogielnica. In other languages, it is referred to as Mogelnitsa, Mogelnitse, Mogelnitza and/or Mogielnicy. 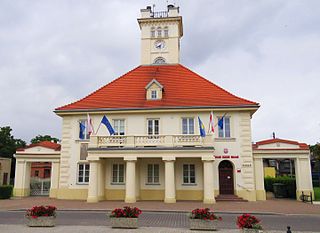 Błonie is a town in Warsaw West County, Masovian Voivodeship, Poland, with a population of 12,354. 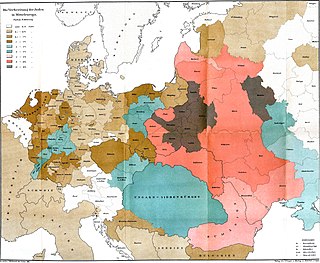 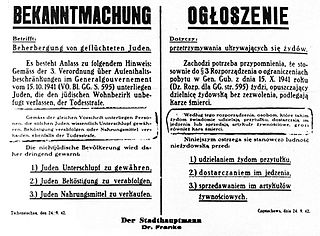 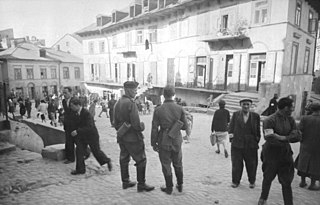 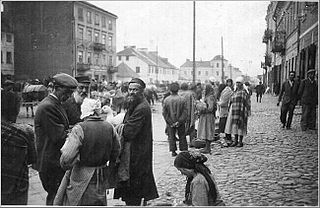 Radom Ghetto was a Nazi ghetto set up in March 1941 in the city of Radom during occupation of Poland, for the purpose of persecution and exploitation of Polish Jews. It was closed off from the outside officially in April 1941. A year and a half later, the liquidation of the ghetto began in August 1942, and ended in July 1944, with approximately 30,000–32,000 victims deported aboard Holocaust trains to their deaths at the Treblinka extermination camp. 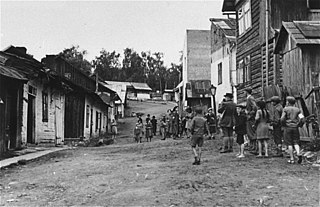 The Kielce Ghetto was a Jewish World War II ghetto created in 1941 by the Schutzstaffel (SS) in the Polish city of Kielce in the south-western region of the Second Polish Republic, occupied by German forces from 4 September 1939. Before the Nazi invasion of Poland in 1939, Kielce was the capital of the Kielce Voivodeship. The Germans incorporated the city into Distrikt Radom of the semi-colonial General Government territory. The liquidation of the ghetto took place in August 1942, with over 21,000 victims deported to their deaths at the Treblinka extermination camp, and several thousands more shot, face-to-face. 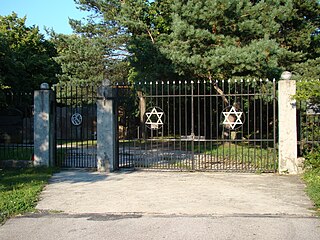 The Kielce Jewish Cemetery is located in the Pakosz District of Kielce, Poland, at the intersections of Pakosz Dolny and Kusocińskiego Streets. It has an area of 3.12 hectares. There are about 330 tombstones saved and preserved inside the necropolis, of which about 150 are arranged in the form of a lapidary monument. The cemetery is closed to visitors without special permit.