Graeco-Phrygian ( /ˌɡriːkoʊˈfrɪdʒiən/ ) is a proposed subgroup of the Indo-European language family which comprises Hellenic and Phrygian languages. [1]

The linguist Claude Brixhe points to the following features Greek and Phrygian are known to have in common and in common with no other language: [2]

Obrador-Cursach (2019) has presented further phonological, morphological and lexical evidence for a close relation between Greek and Phrygian. [3]

Greek has also been variously grouped with Armenian and Indo-Iranian (Graeco-Armenian; Graeco-Aryan), Ancient Macedonian (Graeco-Macedonian) and, more recently, Messapian. Greek and Ancient Macedonian are often classified under Hellenic; at other times, Hellenic is posited to consist of only Greek dialects. The linguist Václav Blažek states that, in regard to the classification of these languages, "the lexical corpora do not allow any quantification" (see corpus and quantitative comparative linguistics). [4] 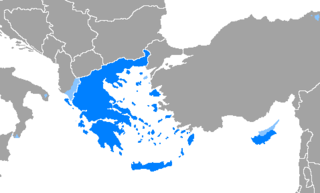 Ancient Greek includes the forms of the Greek language used in ancient Greece and the ancient world from around 1500 BC to 300 BC. It is often roughly divided into the following periods: Mycenaean Greek, Dark Ages, the Archaic period, and the Classical period. The Phrygians were an ancient Indo-European people, initially dwelling in the southern Balkans – according to Herodotus – under the name of Bryges (Briges), changing it to Phryges after their final migration to Anatolia, via the Hellespont. However, the Balkan origins of the Phrygians are debated by modern scholars.

Ancient Macedonian, the language of the ancient Macedonians, either a dialect of Ancient Greek, or a separate Hellenic language, was spoken in the kingdom of Macedonia during the 1st millennium BC and belongs to the Indo-European language family. It gradually fell out of use during the 4th century BC, marginalized by the use of Attic Greek by the Macedonian aristocracy, the Ancient Greek dialect that became the basis of Koine Greek, the lingua franca of the Hellenistic period.

Hellenic is the branch of the Indo-European language family whose principal member is Greek. In most classifications, Hellenic consists of Greek alone, but some linguists use the term Hellenic to refer to a group consisting of Greek proper and other varieties thought to be related but different enough to be separate languages, either among ancient neighbouring languages or among modern spoken dialects.

Václav Blažek is a Czech historical linguist. He is a professor at Masaryk University and also teaches at the University of West Bohemia.

The following is a table of many of the most fundamental Proto-Indo-European language (PIE) words and roots, with their cognates in all of the major families of descendants.