The Pioneer League is a Minor League Baseball league which currently operates in the Rocky Mountain region of the United States. In the past, it also operated in adjoining portions of Canada. It is classified as a Rookie League and is staffed with mostly first and second-year players. The Pioneer League is a short-season league operating from June to early September.

The Butte Copper Kings, named for the once-powerful owners of the copper mines of Butte, Montana, began play in the Pioneer League in 1978 as a co-op team with players from the Philadelphia Phillies, Oakland Athletics, Seattle Mariners and Texas Rangers organizations as well as a few free agents. [1]

The Copper Kings were the three industrialists William A. Clark, Marcus Daly, and F. Augustus Heinze. They were known for the epic battles fought in Butte, Montana, and the surrounding region, during the Gilded Age, over control of the local copper mining industry, the fight that had ramifications for not only Montana, but the United States as a whole. 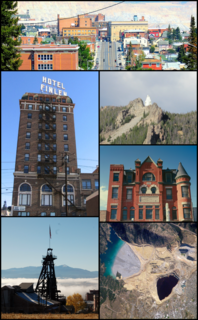 Butte is the county seat of Silver Bow County, Montana, United States. In 1977, the city and county governments consolidated to form the sole entity of Butte-Silver Bow. The city covers 718 square miles (1,860 km2), and, according to the 2010 census, has a population of 33,503, making it Montana's fifth largest city. It is served by Bert Mooney Airport with airport code BTM.

Beginning in 1987, the franchise had been operated by Silverbow Baseball. It was sold in 1996 to the Goldklang Group in a move necessary to stem conflict-of-interest issues when Silverbow head Jim McCurdy had taken the position of President of the Pioneer League in 1994. [2] Silverbow had attempted to sell the franchise in 1994 to investors from California, but the deal fell through when it was determined that Silverbow owned a lesser percentage of the franchise than it had purported to own. [3]

Following the 2000 season, the team relocated to Casper, Wyoming as the Casper Rockies (and was renamed the Ghosts before the 2008 season [4] ) and affiliated with Colorado. [5] 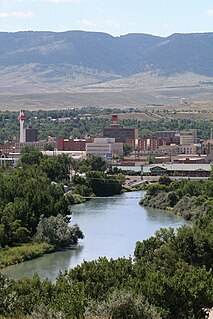 Casper is a city in and the county seat of Natrona County, Wyoming, United States. Casper is the second largest city in the state, according to the 2010 census, with a population of 55,316. Only Cheyenne, the state capital, is larger. Casper is nicknamed "The Oil City" and has a long history of oil boomtown and cowboy culture, dating back to the development of the nearby Salt Creek Oil Field. In 2010, Casper was named the highest-ranked family-friendly small city in the West, and ranked eighth overall in the nation in Forbes magazine's list of "the best small cities to raise a family". 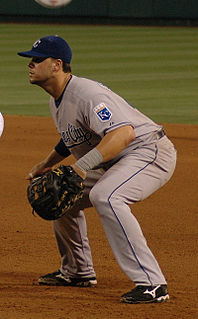 Alumni Coliseum is a 2,000 seat stadium located in Butte, Montana. It is the former home of the Butte Copper Kings Pioneer League franchise. The Coliseum is the current home of the Montana Tech college football team, which shared the stadium with the Copper Kings until their demise, as well as the local American Legion baseball team until a new field was built for that specific purpose. The grandstands that were used for baseball have been removed as has the infield area for future expansions to the Montana Tech campus.

The America West Hockey League (AWHL) was a Tier II Junior A ice hockey league. The AWHL was formed in 1992 to offer junior ice hockey to the Rocky Mountain region of USA Hockey. It originally was called the American Frontier Hockey League (AFHL), and the name change to AWHL came in 1998. The AWHL merged with the North American Hockey League in 2003 and after the merger, the NAHL name was kept.

Charles K. Monfort and Richard L. Monfort are the primary owners of the Colorado Rockies Major League Baseball team. Both grew up in Greeley, Colorado and are sons to Kenneth Monfort; previous owner of Monfort of Colorado, Inc. a meatpacking and distributing company that was acquired by ConAgra Foods in 1987. Dick Monfort is managing general partner, chairman and chief executive officer, while Charlie Monfort is the team's other general partner and vice chairman.

Below is a partial list of minor league baseball players in the Colorado Rockies system and rosters of their minor league affiliates:

Jerry McMorris was the principal owner of the Colorado Rockies of the National League from 1992 through 2005. A limited partner in the ownership group that founded the Rockies in the early 1990s, he joined with meatpacking heir Charlie Monfort and Oren Benton to buy controlling interest in the team after original owner Mickey Monus was embroiled in an accounting scandal. In 2005, McMorris sold his stake of the franchise to the Charie Monfort and his brother Dick.

Ralph Stocker Stadium is owned by the city of Grand Junction, Colorado. Its current tenants are Colorado Mesa University Mavericks football, District-51 high school football, and the Grand Junction Gladiators semi-pro minor league football team, though it hosts other local events as well including track and field and both college and high school commencement ceremonies. The stadium is adjacent on its east side to Suplizio Field.

David Nicholas Kandilas is an Australian professional baseball outfielder for the Mannheim Tornados of the Baseball Bundesliga. He has played for the Sydney Blue Sox and Canberra Cavalry in the Australian Baseball League (ABL).

Brendan Austin Rodgers is an American professional baseball infielder for the Colorado Rockies of Major League Baseball (MLB). He was drafted third overall by the Rockies in the 2015 MLB draft.

Tony Diaz is a Dominican professional baseball coach for the Minnesota Twins of Major League Baseball.

The Rocky Mountain Vibes are a Minor League Baseball team that will begin play as a member of the Pioneer League in Colorado Springs, Colorado, in 2019 as the rookie affiliate of the Milwaukee Brewers. They will play their home games at UCHealth Park which opened in 1988 and seats 8,500 people.