The Granite Mountains are a short subrange of the Rocky Mountains in central Wyoming of the United States. The range runs approximately 100 mi (160 km) E-W along the south side of the Shoshone Basin, and north of the Sweetwater River, in eastern Fremont County and western Natrona County. The highest point is McIntosh Peak at 8,058 feet (2,456 m). [1] Independence Rock is at the east end of the range, [2] and Split Rock was a prominent landmark on the Oregon Trail. The region is rich in uranium and other mineral deposits.

Independence Rock is a large granite rock, approximately 130 feet (40 m) high, 1,900 feet (580 m) long, and 850 feet (260 m) wide, which is in southwestern Natrona County, Wyoming along Wyoming Highway 220. During the middle of the 19th century, it formed a prominent and well-known landmark on the Oregon, Mormon, and California emigrant trails. Many of these emigrants carved their names on it, and it was described by early missionary and explorer Father Pierre-Jean De Smet in 1840 as the Register of the Desert. The site was designated a National Historic Landmark on January 20, 1961 and is now part of Independence Rock State Historic Site, owned and operated by the state of Wyoming.

The Shoshone Mountains, in west central Nevada, make up one of the longest mountain ranges in the state. The range runs in a general north-south direction in Nye and Lander counties. The range has a length of about 66 miles (106 km) and a width of about 6 mi (9.7 km) with an area of approximately 400 sq mi (1,000 km2).

Devil's Gate or Devils Gate is a natural rock formation, a gorge on the Sweetwater River in Wyoming, United States, five miles (8 km) miles southwest of Independence Rock. Although the actual route of travel did not pass through the narrow cleft, the site was a major landmark on the Oregon and Mormon trails, and is particularly significant in the history of the latter. 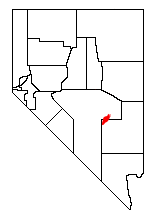 The Quinn Canyon Range is a remote group of mountains in northeastern Nye County, and western Lincoln County in central Nevada in the western United States. Adaven is the only settlement in the mountains, now abandoned.

Punkin Center is an unincorporated community in Gila County, Arizona, United States. The community is located within the Tonto Basin at the confluence of Reno Creek and Tonto Creek. Payson is 29 miles to the north along Arizona Route 188 and Arizona Route 87. Roosevelt Lake is eight miles to the south on Route 188.

The Seven Troughs Range is a mountain range in western Pershing County, Nevada.

The Gap Mountains are a mountain range in eastern Nye County, Nevada. Gap Mountain along with Fox Mountain 7.5 miles (12.1 km) to the south and the hills between overlook the White River valley to the west. Gap Mountain lies just 1.5 mi (2.4 km) southwest of the southern end of the Egan Range of adjacent Lincoln County and appears to be an extension of that range. Fox Mountain lies about 5 miles west of the south end of the Schell Creek Range and 7 mi (11 km) northeast of the north end of the Seaman Range.The Grant Range and small Golden Gate Range lie to the west across the White River Valley.

The Specter Range is a small mountain range in southeastern Nye County, Nevada.

The Owyhee Mountains are a mountain range in Owyhee County, Idaho and Malheur County, Oregon.

The West Silver Bell Mountains are a small 10 mile (16 km) long mountain range of south-central Arizona, United States. The range lies in the north-central arid Sonoran Desert; the Madrean Sky Islands region of southeast Arizona, around Tucson is adjacent to the southeast. 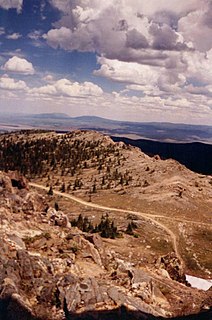 Parting of the Waters is an unusual hydrologic site at Two Ocean Pass on the Great Divide, within the Teton Wilderness area of Wyoming's Bridger-Teton National Forest. Two Ocean Pass separates the headwaters of Pacific Creek, which flows west to the Pacific Ocean, and Atlantic Creek, which flows east to the Atlantic Ocean. At Parting of the Waters, at 44°02.571′N110°10.524′W, North Two Ocean Creek flows down from its drainage on the side of Two Ocean Plateau in and divides its waters more-or-less equally between its two distributaries, Pacific Creek and Atlantic Creek. From this split, Two Ocean Creek waters flow either 3,488 miles (5,613 km) to the Gulf of Mexico via Atlantic Creek and the Yellowstone, Missouri and Mississippi Rivers, or 1,353 miles (2,177 km) to the Pacific via Pacific Creek and the Snake and Columbia Rivers. In the marshy area of Two Ocean Pass adjacent to Parting of the Waters, water actually covers the Continental Divide such that a fish could swim from the Pacific Ocean to the Atlantic Ocean drainages. In fact, it is thought that this was the pass that provided the route for Yellowstone cutthroat trout to migrate from the Snake River (Pacific) to Yellowstone River (Atlantic) drainages.

Sherman is a ghost town in Albany County, Wyoming, United States. Sherman is 19 miles (31 km) southeast of Laramie in the Laramie Mountains and is named for Civil War general William Tecumseh Sherman. The town was located at the summit of the original grade of the First Transcontinental Railroad and the name Sherman Summit or Sherman Hill Summit was applied to the nearby summits of the modern transportation arteries in the Laramie Mountains.

Sheep Creek is a geographical place name. With variations, the name is given to hundreds of bodies of water, roads, canals, reservoirs and populated areas in the United States and other countries. It is the name of a tributary to Lockyear Creek in Queensland, Australia, and the name of at least three bodies of water in Canada. The U.S. state of Montana has 85 different locales that bear that name or a derivation. The U.S. state of Idaho has 92 natural and man-made areas that incorporate Sheep Creek into their names. Nature areas that include trails named Sheep Creek can be found in Canada's Yukon Territory, Colorado's Larimer County and in Utah's Bryce Canyon National Park.

Boars Tusk is an isolated remains of a volcano within the Rock Springs Uplift in the Green River Basin of southwestern Wyoming. It has a peak elevation of 7,101 ft (2,164 m) and rises some 400 ft (120 m) above the surrounding Killpecker Creek plain and lies 26.2 mi (42.2 km) north of Rock Springs. The north end of White Mountain lies 3.0 mi (4.8 km) to the west.

The Sevenmile Mountains are a mountain range in central Gila County in the U.S. state of Arizona. The range has a maximum elevation of 6,629 ft (2,021 m) and a prominence of 989 ft (301 m). The highest peak is labelled Seven on the USGS topo sheet and has a topographic isolation of 13.35 miles. The majority of the southern end of the range is located on the San Carlos Apache Indian Reservation. The high point and the northwestern tip of the range is in the Tonto National Forest and is open to free range hiking. The mountains' high point is located just 3 miles east from a section of the U.S. Route 60 in Arizona in between Globe, Arizona and Show Low, Arizona. The southern end of the range that is inside the San Carlos Apache Indian Reservation should only be hiked with permission from the Reservation. The range is one of many that occur in the Arizona transition zone.

Toms Creek is a stream in Reynolds County in the U.S. state of Missouri. It is a tributary of the West Fork Black River.