The undirected graph shown may have one of several interpretations; the common feature is that the presence of an edge implies some sort of dependence between the corresponding random variables. From this graph we might deduce that

are all mutually independent, once

is known, or (equivalently in this case) that

for some non-negative functions

If the network structure of the model is a directed acyclic graph, the model represents a factorization of the joint probability of all random variables. More precisely, if the events are

then the joint probability satisfies

is the set of parents of node

(nodes with edges directed towards

). In other words, the joint distribution factors into a product of conditional distributions. For example, the directed acyclic graph shown in the Figure this factorization would be

The next figure depicts a graphical model with a cycle. This may be interpreted in terms of each variable 'depending' on the values of its parents in some manner. The particular graph shown suggests a joint probability density that factors as

but other interpretations are possible. [2]

The framework of the models, which provides algorithms for discovering and analyzing structure in complex distributions to describe them succinctly and extract the unstructured information, allows them to be constructed and utilized effectively. [1] Applications of graphical models include causal inference, information extraction, speech recognition, computer vision, decoding of low-density parity-check codes, modeling of gene regulatory networks, gene finding and diagnosis of diseases, and graphical models for protein structure.

Hidden Markov Model (HMM) is a statistical Markov model in which the system being modeled is assumed to be a Markov process – call it  – with unobservable ("hidden") states. HMM assumes that there is another process whose behavior "depends" on . The goal is to learn about by observing . HMM stipulates that, for each time instance , the conditional probability distribution of given the history must not depend on .

A Bayesian network is a probabilistic graphical model that represents a set of variables and their conditional dependencies via a directed acyclic graph (DAG). Bayesian networks are ideal for taking an event that occurred and predicting the likelihood that any one of several possible known causes was the contributing factor. For example, a Bayesian network could represent the probabilistic relationships between diseases and symptoms. Given symptoms, the network can be used to compute the probabilities of the presence of various diseases.

Belief propagation, also known as sum-product message passing, is a message-passing algorithm for performing inference on graphical models, such as Bayesian networks and Markov random fields. It calculates the marginal distribution for each unobserved node, conditional on any observed nodes. Belief propagation is commonly used in artificial intelligence and information theory and has demonstrated empirical success in numerous applications including low-density parity-check codes, turbo codes, free energy approximation, and satisfiability. 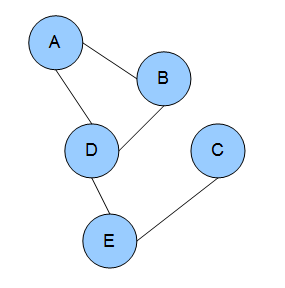 A factor graph is a bipartite graph representing the factorization of a function. In probability theory and its applications, factor graphs are used to represent factorization of a probability distribution function, enabling efficient computations, such as the computation of marginal distributions through the sum-product algorithm. One of the important success stories of factor graphs and the sum-product algorithm is the decoding of capacity-approaching error-correcting codes, such as LDPC and turbo codes.

Conditional random fields (CRFs) are a class of statistical modeling methods often applied in pattern recognition and machine learning and used for structured prediction. Whereas a classifier predicts a label for a single sample without considering "neighboring" samples, a CRF can take context into account. To do so, the prediction is modeled as a graphical model, which implements dependencies between the predictions. What kind of graph is used depends on the application. For example, in natural language processing, linear chain CRFs are popular, which implement sequential dependencies in the predictions. In image processing the graph typically connects locations to nearby and/or similar locations to enforce that they receive similar predictions. 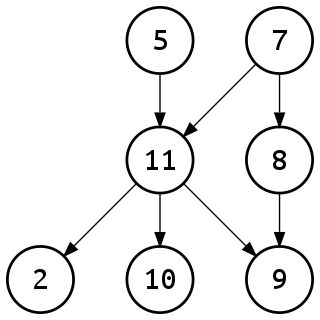 In graph theory, a moral graph is used to find the equivalent undirected form of a directed acyclic graph. It is a key step of the junction tree algorithm, used in belief propagation on graphical models.

The Hammersley–Clifford theorem is a result in probability theory, mathematical statistics and statistical mechanics that gives necessary and sufficient conditions under which a strictly positive probability distribution can be represented as events generated by a Markov network. It is the fundamental theorem of random fields. It states that a probability distribution that has a strictly positive mass or density satisfies one of the Markov properties with respect to an undirected graph G if and only if it is a Gibbs random field, that is, its density can be factorized over the cliques of the graph.

Variable elimination (VE) is a simple and general exact inference algorithm in probabilistic graphical models, such as Bayesian networks and Markov random fields. It can be used for inference of maximum a posteriori (MAP) state or estimation of conditional or marginal distributions over a subset of variables. The algorithm has exponential time complexity, but could be efficient in practice for the low-treewidth graphs, if the proper elimination order is used.

Bayesian programming is a formalism and a methodology for having a technique to specify probabilistic models and solve problems when less than the necessary information is available.

A graphoid is a set of statements of the form, "X is irrelevant to Y given that we know Z" where X, Y and Z are sets of variables. The notion of "irrelevance" and "given that we know" may obtain different interpretations, including probabilistic, relational and correlational, depending on the application. These interpretations share common properties that can be captured by paths in graphs. The theory of graphoids characterizes these properties in a finite set of axioms that are common to informational irrelevance and its graphical representations.

Dependency networks (DNs) are graphical models, similar to Markov networks, wherein each vertex (node) corresponds to a random variable and each edge captures dependencies among variables. Unlike Bayesian networks, DNs may contain cycles. Each node is associated to a conditional probability table, which determines the realization of the random variable given its parents.

In network theory, link prediction is the problem of predicting the existence of a link between two entities in a network. Examples of link prediction include predicting friendship links among users in a social network, predicting co-authorship links in a citation network, and predicting interactions between genes and proteins in a biological network. Link prediction can also have a temporal aspect, where, given a snapshot of the set of links at time , the goal is to predict the links at time . Link prediction is widely applicable. In e-commerce, link prediction is often a subtask for recommending items to users. In the curation of citation databases, it can be used for record deduplication. In bioinformatics, it has been used to predict protein-protein interactions (PPI). It is also used to identify hidden groups of terrorists and criminals in security related applications.