Great Bealings is a small village in Suffolk, England. It has about 302 people living in it in around 113 households. [1] Its nearest towns are Ipswich (6 miles (9.7 km) away) and Woodbridge (2.6 miles (4.2 km)). Nearby villages include Little Bealings, Playford, Culpho, Hasketon and Grundisburgh. The village does not have an obvious centre, and the population is split between two areas — one around Lower Street to the East of the village, and the other at Boot Street/Grundisburgh Road to the West of the village. St Mary's, the village church, is about in the middle of these two centres of population.

The village shares a playing field with Little Bealings, which is located behind the joint Village Hall, and includes a grassed plateau, a fenced and hard surfaced multi-sports court, children's play equipment, and a boules piste. It is named after John Ganzoni, Lord Belstead, who lived in the village for many years, and whose Charitable Trust Fund supported the project.

The River Lark passes through the middle of the village, and is crossed by the main road with a humpback bridge. [2]

In the Domesday Book there is mention of the Saxon Hall, owned by Halden, with Anund the priest in attendance. This was on the meadow by the church and was owned by several families such as the de Peche, Clench, and Majors, who knocked it down in 1775 to use the material to aid the construction of Bealings House.

The village has always had a strong agricultural base with several small farms. In White's gazetteer of Suffolk in 1855, the listed tradesmen are: brickmaker, two boot makers, builder, wheelwright, blacksmith, gardener, shopkeeper, and miller as well as several farmers and gentlemen.

In 1870–72, John Marius Wilson's Imperial Gazetteer of England and Wales described the village as:

BEALINGS (Great), a parish in Woodbridge district, Suffolk; on a branch of the Deben river, and on the East Suffolk railway, near Bealings station, 2¼. miles W by S of Woodbridge. Post Town, Little Bealings, under Woodbridge. Acres, 1,029. Real property, £2,091. Pop., 338. Houses, 88. The property is divided among a few; and much of it belongs to-Lord Henniker. The living is a rectory in the diocese of Norwich. Value, £250.* Patron, Lord Henniker. The church is good. [3]

In 1887, John Bartholomew also wrote an entry on Great Bealings in the Gazetteer of the British Isles with a much shorter description:

Rectors of the Parish

Woodbridge is a historic market town in Suffolk, England, about 8 miles (13 km) up the River Deben from the sea. It lies 7 miles (11 km) north-east of central Ipswich as part of the wider Ipswich built-up area. The town is close to some major archaeological sites of the Anglo-Saxon period, including the Sutton Hoo burial ship. It is well known for its boating harbour and tide mill, on the edge of the Suffolk Coast and Heath Area of Outstanding Natural Beauty. Several festivals are held. As a "gem in Suffolk's crown", it has been named the best place to live in the East of England.

William Page Wood, 1st Baron Hatherley, PC was a British lawyer and statesman who served as a Liberal Lord High Chancellor of Great Britain between 1868 and 1872 in William Ewart Gladstone's first ministry. 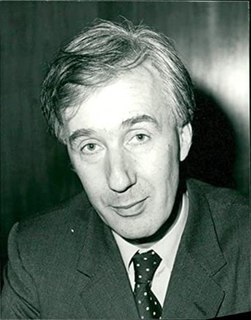 Stoke-by-Nayland is a village and civil parish in Suffolk, England, close to the border with Essex. The village, located within Babergh district, has many cottages and timber-framed houses and all surround a recreation field. Possibly once the site of a monastery, the population of the civil parish at the 2001 census was 703, falling to 682 at the Census 2011.

Belstead is a village and civil parish in the Babergh district of the English county of Suffolk. Located on the southern edge of Ipswich, around 3 miles (5 km) south-west of Ipswich town centre. It had a population of 202 according to the 2011 census. Belstead has amenities such as a village hall, St Mary's the Virgin Church, The bridge school for children with learning difficulties and Belstead Brook Hotel and Spa. It is in the Belstead Brook electoral division of Suffolk County Council. 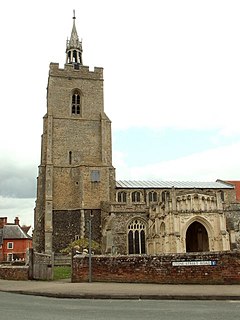 Boxford is a large village and civil parish in the Babergh district of Suffolk, England. Located around six miles east of Sudbury straddling the River Box and skirted by the Holbrook, in 2005 the parish had a population of 1,270. decreasing to 1,221 at the 2011 Census.

Burgh is a village and civil parish in the East Suffolk district of Suffolk, England, about 3.5 miles (6 km) north-west of Woodbridge.

Grundisburgh is a village of 1,584 residents situated in the English county of Suffolk. It is in the East Suffolk district, six 6 miles (10 km) north-east from Ipswich and 4 miles (6 km) north-west of Woodbridge located on the B1079. Flowing through the village are the rivers Lark and Gull. The finding of Ipswich and Thetford-type pottery suggests that there was settlement in the Middle Saxon era. The village is recorded in the Domesday Book as "Grundesbur", "Grundesburg", "Grundesburh" or "Grundesburc". Grundisburgh is pronounced "Gruns-bruh". 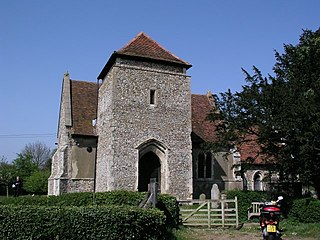 Culpho is a hamlet and civil parish in the East Suffolk district of Suffolk, about 4 miles (6.4 km) northeast of the centre of Ipswich and 3+1⁄2 miles (5.6 km) west of Woodbridge.

Playford is a small village in Suffolk, England, on the outskirts of Ipswich. It has about 215 residents in 90 households. The name comes from the Old English plega meaning play, sport; used of a place for games, or a courtship or mating-place for animals, and the Old English ford meaning a place where a stream or river can be crossed. Villages nearby include Rushmere, Little Bealings, Great Bealings, Culpho and Grundisburgh. There are no pubs or shops in Playford, although it has a church and a village hall.

Thorpe Morieux is a small village and civil parish in Suffolk, England. It is 10 miles south-east of Bury St Edmunds and 10 miles north east of Sudbury.

Little Bealings is a village in Suffolk, England. It has a population of approximately 470 people living in around 185 households. The population had fallen to 420 at the 2011 Census. Its nearest towns are Ipswich and Woodbridge. Nearby villages include Great Bealings, Playford, Culpho, Martlesham and Grundisburgh.

Sotherton is a dispersed village and civil parish in the East Suffolk district, in the English county of Suffolk. It is located approximately 7 miles (11 km) south of Beccles and 3+3⁄4 miles (6.0 km) north-east of Halesworth. The A145 road passes through the east of the parish area. The mid-2005 population estimate for Sotherton parish was 80. Uggeshall is located just to the north-east, Byford to the south and Blythburgh to the south-east. Latitude Festival takes place a couple of miles east. 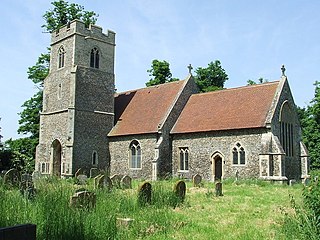 Timworth is a village and civil parish 65 mi (105 km) north east of London and 26 mi (42 km) east of Cambridge in the West Suffolk district of Suffolk, eastern England. Located around two miles north of Bury St Edmunds, its 2005 population was 50. At the 2011 Census the appropriate Postal Code showed the population as being included in Ampton.