The Great Chagos Bank, in the Chagos Archipelago, about 500 km (310 mi) south of the Maldives, is the largest atoll structure in the world, with a total area of 12,642 km2 (4,881 sq mi). [1] The atoll is administered by the United Kingdom through the British Indian Ocean Territory (BIOT).

Despite its enormous size, the Great Chagos Bank is largely a submarine structure. There are only four emerging reefs, mostly located on the western rim of the atoll, except for lonely Nelson Island which lies wholly isolated in the middle of the northern fringe. These reefs have seven or eight individual low and sandy islands, with a total land area of about 5.6 km2 (2.2 sq mi). All islands and their surrounding waters are a Strict Nature Reserve since 1998. [2] The total length of the eastern and southern expanses of the bank, as well as the reefs in its central area are wholly submerged.

The islands of the Great Chagos Bank, starting clockwise from the south, are:

Cartography of the submerged reefs

The Great Chagos Bank was surveyed for the first time by Commander Robert Moresby of the Indian Navy in 1837; all other maps that would be drawn for over a century and a half were based on his chart. [3] Although the charts of atolls made up of mostly emerged reefs, like Peros Banhos and Diego Garcia, were relatively accurate, the cartography of the vast sunken reefs forming the Great Chagos Bank proved quite a challenge. The real shape of these sunken reefs was known only when satellite imagery became available in the latter part of the 20th century.

Moresby's original hydrographic drawings were somewhat at variance with the true shape of the submerged reef, especially in areas where there were no emerging islands close by, like in the South east of the bank. The outlines of the first hydrographic surveys were marked in the 1980s navigational maps of the Chagos with a dotted line and the legend "existence doubtful" until the 1998 edition. [4]

Diego Garcia is an island of the British Indian Ocean Territory, an overseas territory of the United Kingdom. It is a militarised atoll just south of the equator in the central Indian Ocean, and the largest of 60 small islands comprising the Chagos Archipelago. It was first discovered by Europeans and named by the Portuguese, settled by the French in the 1790s and transferred to British rule after the Napoleonic Wars. It was one of the "Dependencies" of the British Colony of Mauritius until the Chagos Islands were detached for inclusion in the newly created British Indian Ocean Territory (BIOT) in 1965.

The Maldives are formed by 26 natural atolls, along with a few islands and isolated reefs today which form a pattern stretching from 7 degrees 10′ North to 0 degrees 45′ South. The largest of these atolls is Boduthiladhunmathi, while the atoll containing the most islands is Huvadhu. 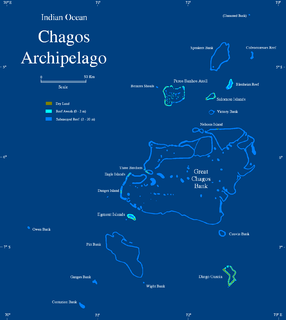 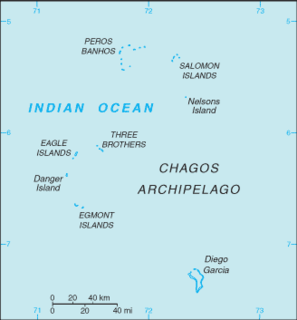 The Salomon Islands or Salomon Atoll is a small atoll of the Chagos Archipelago, British Indian Ocean Territory. 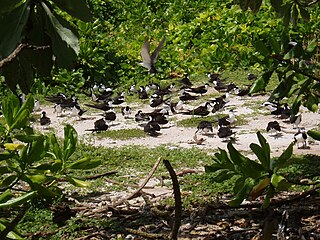 The Three Brothers are a group of three small coral islands 20 kilometres east of Eagle Islands along the central western rim of the Great Chagos Bank, which is the world's largest coral atoll structure, located in the Chagos Archipelago. 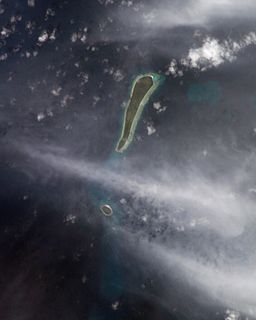 Eagle Islands is a group of two islands in the Chagos Archipelago. They are located on the central-western rim of the Great Chagos Bank, which is the world's largest coral atoll structure.

Danger Island is the westernmost and the southernmost island of the Great Chagos Bank, which is the world's largest coral atoll structure, located in the Chagos Archipelago in the Indian Ocean. 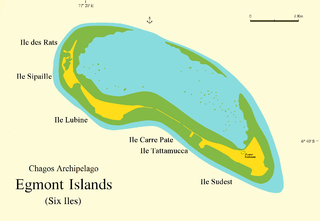 Egmont Islands is an uninhabited atoll administered by the Britain. They are one of the few emerged coral atolls that make up the Chagos Archipelago, British Indian Ocean Territory. 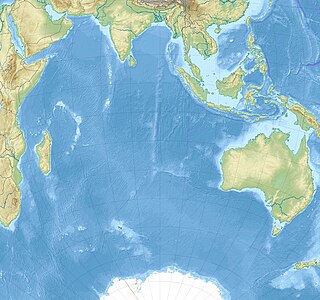 Nelsons Island or Nelson Island or Isle Legour is a small uninhabited island in the Great Chagos Bank, of the Chagos Archipelago in the Indian Ocean. As a protected nature reserve, access to the island is strictly restricted.

The Saya de Malha Bank is the largest submerged ocean bank in the world, part of the vast undersea Mascarene Plateau. 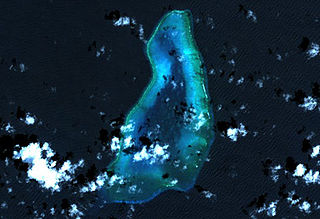 Blenheim Reef is a partly submerged atoll structure in the Chagos Archipelago, Indian Ocean. It includes the coral reef of Baxio Predassa in its southeastern rim, plus another completely submerged part. It is located in the northeastern part of the Chagos Archipelago. It measures almost eleven kilometres (north–south) by more than four kilometres (east–west), with a total area of 36.8 square kilometres, including the lagoon of 8.5 km², the difference being accounted for the mostly by the reef flat. Only on the eastern side, there are a few sand cays above the water. The largest of them is East Island, which is not quite 200 metres long and 70 metres wide. The other islands in the group are North, Middle and South. Only a few grasses grow on the island. The lagoon is up to 18 metres deep and encumbered with rock. The fringing coral reef has a wide passage in the southwest. The closest land is Takamaka Island in the Salomon Islands Atoll, about 20 kilometres to the southwest.

Cauvin Bank is a wholly submerged atoll structure in the Southern Part Chagos Archipelago at 6°49′S72°22′E, just about 7 km (4 mi) South of the Southeastern corner of the rim of the Great Chagos Bank. It is roughly circular in shape, with a diameter of 4 km (2 mi), and an area of about 12 km2 (5 sq mi). There are least depths between 9 to 11 m in the Northern part of the reef. The closest land is the northernmost part of Diego Garcia atoll, Middle Island, 41 km (25 mi) to the South.

Lakshadweep, is a group of islands in the Laccadive Sea, 200 to 440 km off the southwestern coast of India. The archipelago is administered as a union territory and district of India. They were also known as Laccadive Islands, although geographically this is only the name of the central subgroup of the group. Lakshadweep means "one hundred thousand islands" in Sanskrit and Malayalam. The islands form the smallest Union Territory of India and their total surface area is just 32 km2 (12 sq mi). The lagoon area covers about 4,200 km2 (1,600 sq mi), the territorial waters area 20,000 km2 (7,700 sq mi) and the exclusive economic zone area 400,000 km2 (150,000 sq mi). The region forms a single Indian district with 10 subdivisions. Kavaratti serves as the capital of the Union Territory and the region comes under the jurisdiction of Kerala High Court. The islands are the northernmost of the Lakshadweep-Maldives-Chagos group of islands, which are the tops of a vast undersea mountain range, the Chagos-Laccadive Ridge.

Amini is a census town in the Union Territory of Lakshadweep, India. It is also the name of the island where the town stands and of the atoll that contains that island. It has a distance of 1,994 km (1,239 mi) south of the city of Delhi.