Greta Conway Van Susteren (born June 11, 1954) is an American commentator, lawyer, and former television news anchor for CNN, Fox News, and MSNBC. She hosted Fox News's On the Record w/ Greta Van Susteren for 14 years (2002–2016) before departing for MSNBC, where she hosted For the Record with Greta for roughly six months in 2017. A former criminal defense and civil trial lawyer, she appeared as a legal analyst on CNN co-hosting Burden of Proof with Roger Cossack from 1994 to 2002, playing defense attorney to Cossack's prosecutor. In 2016, [2] she was listed as the 94th most powerful woman in the world [3] by Forbes , up from 99th in 2015. [4]

Van Susteren was born in Appleton, Wisconsin. Her father, Urban Van Susteren, was of Dutch descent. [5] [6] Her mother, born Margery Conway, was a homemaker of Irish descent. [7] [8] Van Susteren's father was a longtime friend of future U.S. Senator Joseph McCarthy. McCarthy was best man at Greta's parents' wedding. [9] Urban Van Susteren, an elected judge, served as a campaign strategist for McCarthy, although Urban later broke with him. [10]

Van Susteren's sister, Lise, is a forensic psychiatrist in Bethesda, Maryland. In 2006, Lise was a candidate for the Democratic nomination for United States Senate. [11] Her brother, Dirk Van Susteren, was a journalist and long-time editor of the Vermont Sunday magazine, jointly published, until folding in 2008, by the Rutland Herald and the Barre Montpelier Times Argus . [12]

Van Susteren graduated from Xavier High School in Appleton in 1972 and the University of Wisconsin–Madison in 1976, where she studied geography and economics. She later earned a J.D. from Georgetown University Law Center in 1979 and prior to the start of her television work returned to Georgetown Law as an adjunct faculty member in addition to her full-time legal career. She was awarded an honorary doctor of laws degree from Stetson Law School. [13]

During the President Clinton impeachment debate, Van Susteren dismissed the issue as one of an unfaithful husband, and not an impeachable offense. [14]

During coverage of the O. J. Simpson murder trial, she appeared regularly on CNN as a legal analyst. [15] This led to her stint as co-host of CNN's Burden of Proof and The Point. [2]

In 2002, Van Susteren switched to the Fox News Channel after a highly publicized contract-bidding war. She hosted the current affairs show On the Record w/ Greta Van Susteren . [14]

On September 6, 2016, she resigned from Fox News. She was not able to say goodbye on-air, as the network immediately filled the On the Record anchor spot with Brit Hume. Van Susteren, who said that Fox "has not felt like home to me for a few years," chose to take advantage of a clause in her contract that allowed her to resign from the network immediately: "The clause had a time limitation, meaning I could not wait." [16]

Van Susteren is on the Board of Directors at the National Institute for Civil Discourse (NICD). [19] The institute was created at the University of Arizona in the aftermath of the 2011 Tucson shooting where 6 people were killed, and 13 others left wounded, including US Representative Gabrielle Giffords. [20]

In September 2018, Van Susteren testified before Congress about the human rights abuses and genocide against the Rohingya people of Myanmar. [23]

In February 2019, Van Susteren joined Gray Television, a large group of television stations, as its chief national political analyst out of Gray's Washington bureau, providing commentary and analysis to the newscasts airing on Gray's 140+ stations. She is also developing two nationally syndicated shows for the company. [24] In April 2019, Van Susteren and Gray announced Full Court Press with Greta Van Susteren, a Sunday morning talk show, which will begin airing on most Gray stations in September 2019, along with Weigel Broadcasting stations in Chicago and Milwaukee. [25] With Gray stations in Iowa and South Carolina, the program hopes to get candidate interviews for such early election primary states. The program plans to roll out "Full Court Press-Overtime", a website and associated app with additional content and user feedback. [26]

A Sunday morning talk show is a television program with a news/talk/public affairs–hybrid format that is broadcast on Sunday mornings. This type of program originated in the United States, and has since been used in other countries. 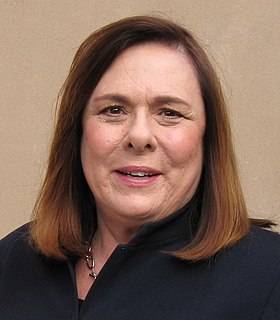 Candy Alt Crowley is an American news anchor who was employed as CNN's chief political correspondent, specializing in USA national and state elections. Her father is Christopher Crowley. She was based in CNN's Washington bureau and was the anchor of their Sunday morning talk show State of the Union. She has covered elections for over two decades.

Gray Television, Inc. is an American publicly traded television broadcasting company based in Atlanta, Georgia. Founded in 1946 by James Harrison Gray as Gray Communications Systems, the company owns or operates 145 stations across the United States. Its station base consists all ranges of media markets, from as large as Cleveland, to one of the smallest markets, North Platte, Nebraska.

Laurie Walker Dhue is an American television journalist. Until April 2015, Dhue hosted episodes of TheBlaze's investigative journalism news magazine For the Record, and presented highlights of evening news on TheBlaze.com TV. Previously she was a Fox News Channel anchor from 2000–2008, reporting for the television show Geraldo at Large and the host of Fox ReportWeekend.

WJRT-TV, virtual and VHF digital channel 12, is an ABC-affiliated television station licensed to Flint, Michigan, United States and serving the Flint/Tri-Cities television market. The station is owned by Gray Television. WJRT-TV's studios are located on Lapeer Road in Flint, with offices and a second newsroom for the Tri-Cities in Saginaw. The station's transmitter is located on Burt Road in Albee Township, Michigan. On cable, WJRT-TV is carried on Comcast Xfinity channel 7 and on Charter Spectrum channel 11. 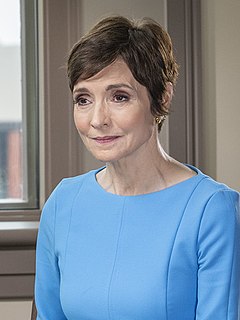 Catherine Herridge is a CBS News senior investigative correspondent currently based in Washington D.C. She began her role at CBS in November 2019 after leaving her role as Chief Intelligence correspondent for Fox News Channel. She had hosted the Saturday edition of Weekend Live. 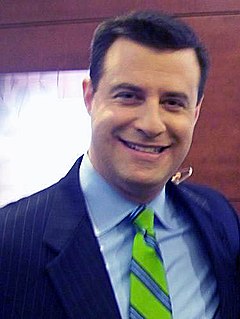 David Martin Shuster is an American television journalist and talk radio host. He most recently served as principal anchor and managing editor for i24NEWS, previously serving as an anchor for MSNBC and worked for Fox News, CNN, Current TV, and Al Jazeera America. 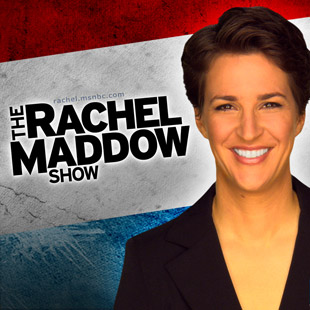 The Rachel Maddow Show is an American progressive news and opinion television program that airs on MSNBC, running in the 9:00 pm ET timeslot Monday through Friday. It is hosted by Rachel Maddow, who gained a public profile via her frequent appearances as a progressive pundit on programs aired by MSNBC. It is based on her former radio show of the same name. The show debuted on September 8, 2008.

Megyn Marie Kelly is an American lawyer and journalist who was a talk show host at Fox News from 2004 to 2017, and a host and correspondent with NBC News from 2017 to 2018. She currently produces a podcast, The Megyn Kelly Show, and is also active in posting to her Instagram page and YouTube channel.

Cable News Network (CNN), an American basic cable and satellite television channel that is owned by the Turner Broadcasting System division of WarnerMedia, was founded in 1980 by Ted Turner and 300 other original employees, who invested $20 million into the network. Upon its launch, CNN became the first channel to provide 24-hour television news coverage, and was the first all-news television network in the United States. This article discusses the history of CNN, beginning with the June 1980 launch of the channel. 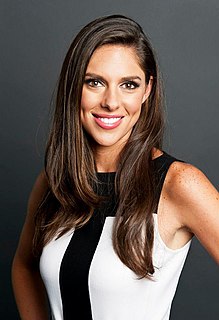 Abigail Haight Huntsman is an American journalist and television personality. The daughter of former Utah Governor Jon Huntsman Jr. and Mary Kaye Huntsman, Huntsman rose to prominence as a host on MSNBC and NBC News. She then became a general assignment reporter for Fox News Channel and later a co-host of Fox & Friends Weekend. Huntsman co-hosted the ABC talk show The View from September 2018 to January 2020.

Ari Naftali Melber is an American attorney and journalist who is the chief legal correspondent for MSNBC and host of The Beat with Ari Melber.

Tucker Carlson Tonight is an American talk show and current affairs program hosted by paleoconservative commentator Tucker Carlson. The show is broadcast live from Washington, D.C., on the Fox News Channel at 8:00 P.M. ET on weeknights, with a repeat airing at midnight the following morning. The show typically includes political commentary, monologues, interviews, and analysis. It premiered as a 7:00 P.M. ET program in Fox News Channel's lineup on November 14, 2016. On nights when Carlson is not available, Canadian conservative author and political commentator Mark Steyn often fills in as a substitute host. 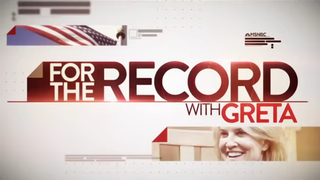 For the Record with Greta was an American news television program hosted by Greta Van Susteren, which began airing on MSNBC on January 9, 2017. It was created after she moved from Fox News to MSNBC amidst sexual allegations against Roger Ailes, although she defended him. She has stated she was "troubled by the culture" at Fox News. Van Susteren pitched the show as "fair and balanced." For The Record was cancelled on June 29, 2017 after Van Susteren departed MSNBC. The final episode aired the previous day on June 28, 2017. The program had lower viewership than comparable shows on MSNBC, which likely contributed to the cancellation.

Suzanne Scott is the American current CEO of Fox News, the second CEO in the network's history.

Elizabeth MacDonald is an American financial journalist working for Fox Business News. MacDonald used to work as a senior editor at Forbes magazine. She won a Gerald Loeb Award for her work in magazines.