Großstadtrevier (roughly (Big) City Police Station) is a German television series, broadcast on Germany's Das Erste of the ARD. First aired on 16 December 1986, the show is one of the most popular television series in the country. It follows the everyday work of a fictional police station on the Kiez of Hamburg.

Christoph Eichhorn is a German television actor and director. He is the son of German actor Werner Eichhorn.

Navíd Akhavan is an Iranian-German actor, translator and singer best known for his role as Hakan in the German comedy television series König von Kreuzberg. He is also known as Navid Navid.

Jürgen Roland, born Jürgen Schellack was a German film director. Roland was described as the "father of German TV crime shows". He directed about 80 TV productions and 30 movies.

Heinz Lieven is a German actor.

SOKO Wismar is a German police procedural television series. It first aired on 6 October 2004. SOKO is an abbreviation of the term "Sonderkommission". SOKO Wismar is transmitted on the German public broadcasting channel ZDF on Wednesdays at 6:00pm. SOKO Wismar is the fifth spin-off from the series SOKO 5113.

Isolda Dychauk is a German actress of Russian descent.

Emily Wood is a German actress.

Heiter bis tödlich is the name of a crime series, first broadcast October 25, 2011 by the German television network Das Erste. This series is made up of several different shows, which all share a common brand and theme.

Mareike Ann Carrière was a German actress, spokesperson and translator. She was perhaps best known for her television show appearances. She was born in Hanover, Lower Saxony, West Germany.

Sonja Gerhardt is a German film and television actress. She is best known for her roles in the television series Schmetterlinge im Bauch and Deutschland 83. 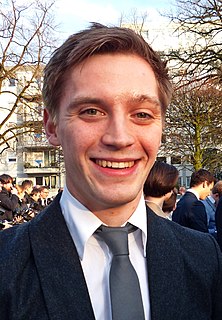 Jonas Nay is a German actor and musician known for starring as Martin Rauch in Deutschland 83, the first German-language TV series shown on American television, and its sequels, Deutschland 86 and Deutschland 89.

Stephan Kampwirth is a German theatre and screen actor.

Gina Alice Stiebitz is a German actress. She is best known for portraying Franziska Doppler in the Netflix show Dark. She has also appeared in a number of stage productions, primarily at the Friedrichstadt-Palast theatre in Berlin.