Last updated September 21, 2020
Not to be confused with Gujarati language.
"Gujari" redirects here. For the raga, see Gujari Raga.

Gurjari, also known as Gujri (गुर्जरी, گُوجَری) is a variety of Indo-Aryan spoken by the Gurjars and other tribes of India, Pakistan, and Afghanistan. [3] [4]

The language is mainly spoken in Jammu and Kashmir, Himachal Pradesh, Haryana, Uttarakhand, Rajasthan, Gujarat, Punjab, Delhi and other parts of India. The government of Jammu and Kashmir has recognized Gujari by including it in the sixth schedule of the state constitution. [5]

The language is understood by Gujjars across Pakistan and spoken in upper or hilly areas including Hazara Division, Malakand Division, Peshawar Division, Azad Kashmir and Gilgit-Baltistan. In Pakistan, a number of organisations and institutions work for the development of Gujari, including a Gujari language news channel.

It is spoken in two provinces in southeastern Afghanistan.

The National Academy of Letters, Sahitya Akademi, recognized Gujari as one of the major Indian languages for its National Award, Bhasha Samman, and other programmes. The Jammu and Kashmir Academy of Arts, Culture and Languages established a Gujari Department in its Central Office in the 1970s and published in Gujari. They organized seminars, conferences, etc. for the development of the Gujari Language. Jammu and Kashmir State Board of School Education made curriculum in Gujari up to Middle Standard for teaching Gujari in schools. The University of Jammu Council approved the opening of Gojri Research Centre in Jammu and University of Kashmir that have been awarded Doctorate Degrees on completing research projects on the language. In Pakistan administered Kashmir, the Gujari Academy has been established and Postgraduate Studies Departments were set up in various Universities and Regional Research Centers.

In lower or plain areas of Pakistan, Gujjars have major concentration in districts like Islamabad, Attock, Rawalpindi, Chakwal, Jhelum, Gujrat, Sialkot, Narowal, Gujranwala, Sargodha, Faisalabad, Sheikhupura, Lahore and Layyah. However, due to revolution of time, majority of them have forgotten or stopped speaking Gujrai. Gojri Bahali Programme (Gojri Revival Programme) has been launched in these areas to encourage Gujjars to restart speaking Gujari. Though this programme has particular focus on these areas, it extends to whole of Pakistan. Under this programme, Gujjars are being persuaded to readopt Gujari as their mother language. They are also being asked to mention it in the mother language column of various forms at educational institutions; when applying for computerised national identity card; and while filling out their particulars when seeking employment. Under this programme the federal government will be asked to add Gujari in the mother language column of population census. Similarly the University of Gujrat will be asked to set up Gojri Department. The programme is the initiative of Muhammad Afsar Khan, a Kundoana Gujjar from Chakdina village in Gujrat district. Kundoana Gujjars are a branch of Khatana Gujjars and trace their descent from Kundo, a famous Gujjar who lived during the reign of Mughal King Akbar or immediately before him in Gujrat district. His grave survives to date in Makiana village in Gujrat tehsil.

Azad Jammu and Kashmir, abbreviated as AJK and colloquially referred to as simply Azad Kashmir, is a region administered by Pakistan as a nominally self-governing jurisdiction, and constituting the western portion of the larger Kashmir region which has been the subject of a dispute between India and Pakistan since 1947. The territory shares a border to the north with Gilgit-Baltistan, together with which it is referred to by the United Nations and other international organizations as "Pakistani-administered Kashmir". Azad Kashmir is one-sixth the size of Gilgit-Baltistan and constitutes part of what is Kashmir proper—a valley divided between Indian and Pakistani control in which the majority of the ethnic Kashmiri population lives. Azad Kashmir also shares borders with the Pakistani provinces of Punjab and Khyber Pakhtunkhwa to the south and west, respectively. On the eastern side, Azad Jammu and Kashmir is separated from the Indian union territory of Jammu and Kashmir by the Line of Control (LoC), which serves as the de facto border between India and Pakistan in Kashmir. The administrative territory of Azad Jammu and Kashmir covers a total area of 13,297 km2 (5,134 sq mi), and has a total population of 4,045,366 as per the 2017 national census.

The Indo-Aryan language spoken on the Pothohar Plateau in the far north of Pakistani Punjab, as well as in most of Pakistan's Azad Kashmir and in western areas of Indian Jammu and Kashmir, is known by a variety of names, the most common of which are Pahari and Pothwari.

Muzaffarabad district of Azad Kashmir, Pakistan is located on the banks of the Jhelum and the Neelum rivers, and is very hilly. The district is bounded to Punjab in the west and to Kupwara and Baramulla districts of the Kashmir in the east. To the north is Neelum District; the fall on the northeast of the district and Bagh District forms the southern boundary. The total area of the district is 1,642 square kilometres (634 sq mi). The city of Muzaffarabad serves as capital of Azad Kashmir. 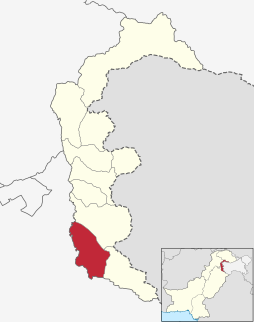 The Bakarwal are a mostly- Muslim nomadic tribe based in the Pir Panjal and Himalayan mountains of South Asia. They are traditionally, and still mainly, goatherds and shepherds. They reside in the entire Kashmir region between India and Pakistan, and in the Nuristan province of Afghanistan..

Poonch or Punch is a district in Jammu and Kashmir, India. With headquarters the town of Poonch, it is bounded by the Line of Control on three sides. The 1947-48 war between India and Pakistan divided the earlier district into two parts. One went to Pakistan and the other became part of the then Indian state of Jammu & Kashmir.

Laksar is a small city and Nagar Palika in the Indian state of Uttarakhand, situated along National Highway 334A. It is an important sugar manufacturing destination in the state and also known for the Laksar Junction railway station (LRJ), the largest railway junction in the state, which was built in 1866. 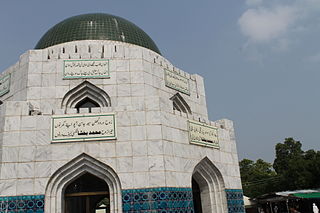 Mīān Muhammad Bakhsh was a Sufi saint and a Western Punjabi, Hindko and Pothohari poet regarded as the Rumi of Hind Indian subcontinent. He belonged to the Qadri tariqah. He is especially renowned as the author of a book of poetry called Sayful Mulūk as well as the romance tragedy Mirza Sahiban. He was born in a village called Khari Sharif, situated near Mirpur.

Tanda is a town in Gujrat District in the Pakistani province of Punjab. It is a Union council, an administrative subdivision of Gujrat Tehsil. 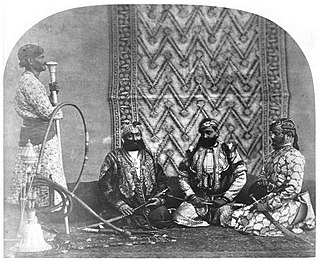 Gurjar or Gujjar is an ethnic agricultural and pastoral community of India, Pakistan, and Afghanistan. They were known as Gurjaras during the medieval times, a name which is believed to have been an ethnonym in the beginning as well as a demonym later on. Although traditionally they have been involved in agriculture, Gurjars are a large heterogeneous group that is internally differentiated in terms of culture, religion, occupation, and socio-economic status. The historical role of Gurjars has been quite diverse in society, at one end they have founded kingdom, districts, cities, towns, and villages, and at the other end, they are also nomads with no land of their own.

Mian Bashir Ahmed Laaravi is a Kashmiri politician and a Caliph of Islamic Sufi order(Naqshbandi,Majadadi,Larvi) in Jammu and Kashmir. He was born in November 1923 in Wanghat, Kashmir.

In the context of the nomadic Gujjar/Bakarwal of South Asia, the terms ajar and ājaṛī, originally meaning "shepherd" in Gujjari, are used in several different ways.

Pahari Speaking People constitute a linguistic group of the Indian territory of Jammu and Kashmir . They speaks a number of Pahari dailects/ languages most of them are a part of Indo-Aryan languages spoken in Jammu and Kashmir, India.