The Gulf of Tonkin (Vietnamese : Vịnh Bắc Bộ, simplified Chinese :北部湾; traditional Chinese :北部灣; pinyin :Běibù Wān; lit. Northern Gulf; formerly known as 东京湾 or 東京灣 during the ROC period) is a gulf at the northwestern portion of the South China Sea, located off the coasts of Tonkin (northern Vietnam) and South China. It is defined in the west and northwest by the northern coastline of Vietnam down to the Hòn La Island, in the north by China's Guangxi Zhuang Autonomous Region, and to the east by the Leizhou Peninsula and Hainan Island.

The bay's Vietnamese and Chinese names – Vịnh Bắc Bộ and Běibù Wān, respectively – both mean "Northern Bay". Bắc Bộ is the native Vietnamese name of Tonkin. The name Tonkin, written "東京" in Hán-Nôm characters and Đông Kinh in the Vietnamese alphabet, means "eastern capital", and is the former toponym for Hanoi, the present capital of Vietnam. It should not to be confused with Tokyo, which is also written "東京" and also means "eastern capital". During Vietnam's French colonial era, the northern region was called Tonkin.

On 2 August 1964, United States President Lyndon B. Johnson falsely claimed that North Vietnamese forces had twice attacked American destroyers in the Gulf of Tonkin.</ref>"LBJ tape 'confirms Vietnam war error'." Martin Fletcher. The Times . 7 November 2001.</ref> Known today as the Gulf of Tonkin Incident, this event spawned the Gulf of Tonkin Resolution of 7 August 1964, ultimately leading to open war between North Vietnam and the United States. It furthermore foreshadowed the major escalation of the Vietnam War in South Vietnam, which began with the landing of US regular combat troops at Da Nang in 1965.

The Gulf of Tonkin incident, also known as the USS Maddox incident, was an international confrontation that led to the United States engaging more directly in the Vietnam War. It involved both a proven confrontation on August 2, 1964 and a claim of a second confrontation on August 4, 1964 between ships of North Vietnam and the United States in the waters of the Gulf of Tonkin. The original American report blamed North Vietnam for both incidents, but the Pentagon Papers, the memoirs of Robert McNamara, and NSA publications from 2005, suggest that the dismissal of legitimate concerns regarding the veracity of the second incident by Department of State and other government personnel was used to justify an escalation by the US to a state of war against North Vietnam.

Tonkin, also spelled Tongkin, Tonquin or Tongking, is an exonym referring to the northern region of Vietnam. During the 17th and 18th centuries, this term referred to the domain Đàng Ngoài under Trịnh lords' control, including both the Northern and Thanh-Nghệ regions, north of the Gianh River. From 1884 to early 1945, this term was used for the French protectorate of Tonkin, composed of only the Northern region.

The Nguyễn dynasty was the last Vietnamese dynasty, which ruled Vietnam largely independently from 1802 to 1883. During its existence, the empire expanded into modern-day southern Vietnam, Cambodia, and Laos through a continuation of the centuries-long Nam tiến and Siamese–Vietnamese wars. After 1883, the Nguyễn emperors ruled nominally as heads of state of the French protectorates of Annam and Tonkin until the final months of WWII; they later nominally ruled over the Empire of Vietnam until the Japanese surrender. 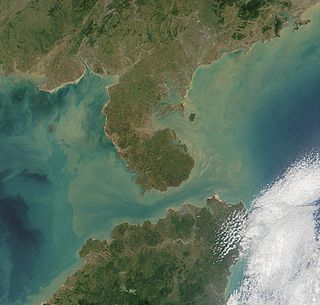 Jiaozhi (Chinese) or Giao Chỉ (Vietnamese) was a historical region corresponding to present-day Northern Vietnam. The kingdom of Nanyue set up the Jiaozhi Commandery, an administrative division centered in the Red River Delta that existed through Vietnam's first and second periods of northern domination. During the Han dynasty, the commandery was part of a province of the same name that covered northern and central Vietnam as well as Guangdong and Guangxi in southern China. In 670 AD, Jiaozhi was absorbed into the Annam Protectorate established by the Tang dynasty. Afterwards, official use of the name Jiaozhi was superseded by "Annam" and other names of Vietnam, except during the brief Fourth Chinese domination when the Ming dynasty administered Vietnam as the Jiaozhi Province.

Laizhou Bay is a bay on the southern shore of the Bohai Sea, bounded by the northwestern coastline of the Shandong Peninsula west of the Port of Longkou and the eastern coastline of Dongying south of the Yellow River estuary. It is named after the county-level city of Laizhou to its east, and is the smallest of the three main bays of the Bohai Sea.

The Vietnamese Demilitarized Zone was a demilitarized zone established as a dividing line between North and South Vietnam from July 1954 to 1976 as a result of the First Indochina War. During the Vietnam War (1955-1975) it became important as the battleground demarcation separating North from South Vietnamese territories. The zone ceased to exist with the reunification of Vietnam on 2 July 1976, though the area remains dangerous due to the numerous undetonated explosives it contains.

Tonkin Street is a street between Sham Shui Po and Cheung Sha Wan of New Kowloon in Hong Kong. It runs northeast to southwest and crosses many major roads in the Cheung Sha Wan area. After extensive reclamation in West Kowloon during the 1990s, an extension Tonkin Street West (東京街西) was built. 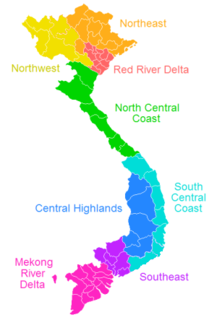 Northern Vietnam, Central Vietnam and Southern Vietnam are the three main historic, geographic and cultural regions within Vietnam. Each region consists of subregions, with considerable cultural differences originating from each subregions. 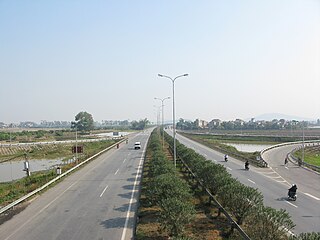 The Beibu Gulf Economic Rim or Beibu Economic Belt also known as Gulf of Tonkin Economic Belt in defines the economic region or rim surrounding around China's southwestern coastal region and cities around the Gulf of Tonkin. The region is part of Chinese government's "Go West" strategy, to boost its less developed western regions. The implementation of the campaign, has resulted in many construction projects in cities on the Beibu Gulf Rim, especially in Guangxi. The Beibu Gulf economic rim has emerged as a new highlight of China-ASEAN cooperation, especially between Vietnam, who is also cooperating in this economic zone. It covers Guangdong, Hainan and Guangxi, and northern and central Vietnam.

Đàng Ngoài, also known as Tonkin, Bắc Hà or Annam Kingdom (安南國), was an area in northern Đại Việt during the 17th and 18th centuries as the result of Trịnh–Nguyễn War. The word "Đàng Ngoài" first appeared in the Dictionarium Annamiticum Lusitanum et Latinum by Alexandre de Rhodes. 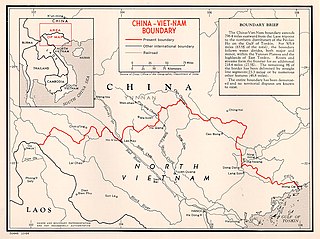 The China–Vietnam border is the international boundary between China and Vietnam, consisting of a 1,297 km terrestrial border stretching from the tripoint with Laos in the west to the Gulf of Tonkin coast in the east, and a maritime border in the Gulf of Tonkin and South China Sea.

Tropical Storm Bebinca was a weak but erratic and long-lived tropical cyclone that affected South China and Vietnam in mid-August 2018. Bebinca originated from a tropical depression over the South China Sea on August 9. Maintaining this intensity for a few days near the Guangdong coast, the system intensified into a tropical storm south of Jiangmen on August 13. The storm moved slowly to the east and then curved back on the next day, before making landfall in the Leizhou Peninsula on August 15. Bebinca crossed the Gulf of Tonkin and made landfall in Vietnam on August 16, before dissipated on the next day.