Gulin County (simplified Chinese :古蔺县; traditional Chinese :古藺縣; pinyin :Gǔlìn Xiàn)is a county in the south of Sichuan Province, China, bordering Guizhou province to the north, south, and east. It is under the administration of Luzhou city. The county covers 3,184 km2 (1,229 sq mi) with a population of 833,000 in 2008. 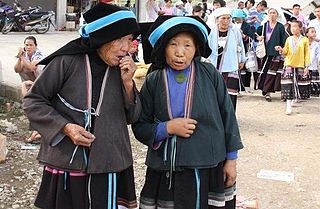 The Gelao people are an ethnic group of China and Vietnam. They form one of the 56 ethnic groups officially recognized by the People's Republic of China. However, many Gelao are also variously classified as Yi, Miao, and Zhuang by the Chinese government.

Luzhou (simplified Chinese: 泸州; traditional Chinese: 瀘州; pinyin: Lúzhōu; Sichuanese Pinyin: Nu2zou1; Luzhou dialect: [nu˨˩tsəu˥]), formerly transliterated as Lu-chou or Luchow, is a prefecture-level city located in the southeast of Sichuan Province, China. The city, named Jiangyang until the Southern and Northern Dynasties, is known as the "wine city". Situated at the confluence of the Tuo River and the Yangtze River, Luzhou is not only an important port on the Yangtze river, but also the largest port in both size and output in Sichuan province since Chongqing seceded from Sichuan province in 1997. At the 2010 census its population was 4,218,427 inhabitants whom 919,832 lived in the built-up (or metro) area made of Jiangyang and Longmatan districts, as Naxi district is not conurbated yet. Luzhou, which borders Yunnan, Guizhou and Chongqing, is the only geographic junction of the four provinces, and was therefore the logical place for a port in ancient China. After the PRC was founded in 1949, Luzhou became the capital of southern Sichuan province. In 1983, Luzhou was approved as a prefecture-level city administratively. 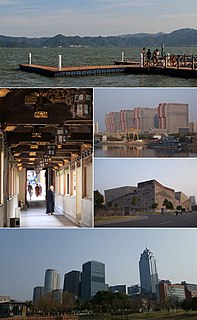 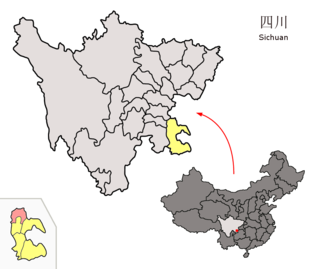 Lu County or Luxian is a county in the southeast of Sichuan Province, China, bordering Chongqing Municipality to the northeast. It is the northernmost county-level division of Luzhou city.

Hejiang is a county in the southeast of Sichuan Province, China, bordering Guizhou province to the south and Chongqing Municipality to the north and northeast. It is under the administration of Luzhou city.

Xuyong County is a county in the southeast of Sichuan Province, China, bordering the provinces of Guizhou to the south and Yunnan to the west. It is under the administration of the prefecture-level city of Luzhou. The county covers 2,977 km2 (1,149 sq mi) with a population of 688,200 in 2007.

Jiangyang District is the central urban district of the city of Luzhou, in the Sichuan province of China.

Gulin (古蔺县) is a county of Luzhou, Sichuan, China.

Guzhang County is a county of Hunan Province, China. The county is the 2nd least populous administrative unit of the counties or county-level cities in the province, it is under the administration of Xiangxi Autonomous Prefecture. 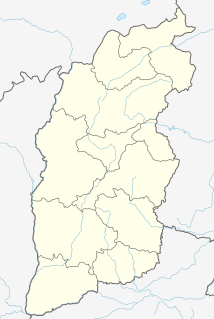 Gu County or Guxian is a county in the south of Shanxi province, China. It is under the administration of Linfen city.

Gulin Park is a 400 acre park in Nanjing in Jiangsu province, China.

Luzhou Yunlong Airport is a dual-use military and civilian airport in the city of Luzhou in China's Sichuan province. Preparatory work for the airport began in October 2013 with a total investment of 2.77 billion yuan, while construction officially started on 5 November 2016. The airport was opened on 10 September 2018 with the inaugural Colorful Guizhou Airlines flight from Guiyang, and all flights were transferred from the old Luzhou Lantian Airport.

The Banruo Temple, also pronounced Bore, is a Buddhist temple located in Shenhe District of Shenyang, Liaoning, China. The temple occupies an area of 1,000-square-metre (11,000 sq ft) and the total area including temple lands, forests and mountains is over 3,600-square-metre (39,000 sq ft). It is a Bhikkhuni temple.

Chajiaotan Bridge is a suspension bridge currently under construction in Xishui County, Guizhou, China. Once complete the bridge, at 323 m (1,060 ft), it will be one of the highest in world. The bridge will form part of the Xugu Expressway carrying traffic over the Chishui Riverr. The bridge began construction in 2014 and is expected to open in 2018. The main span of the bridge will be 1,200 m (3,900 ft) making it one of the longest ever built. Other high bridges on the Sichuan section of the Xugu expressway include Shilianghe, Luosizhai, Tiantanghe, Modaoxi and two crossings of the Gulin River.

Guling may refer to these towns in China: