Loosely based on the Australian miniseries Bangkok Hilton , in the film, seeing Roshni's talent for singing, Rahul gives her a break, and they eventually fall in love. On a trip to Hong Kong, she is arrested for possession of cocaine, not knowing that it is all Rahul's doing.

Gumrah was critically well received upon its release with major appreciation drawn towards Sridevi's performance, which many considered as one of the finest performances of her career and earned her a nomination for Best Actress at the 39th Filmfare Awards. The film was also a commercial success grossing ₹545 million (US$7.6 million) worldwide against its ₹200 million (US$2.8 million) budget. Thus it became the seventh highest-grossing film of 1993. [1]

Roshni (Sridevi) is the only child of Sharda Chadda (Reema Lagoo). Her father, Prakash Chadda (Anupam Kher), left before she was born, and she has no knowledge of where he went. After her mother learns she has a fatal illness, she asks her family friend to take Roshni to Mumbai, so she learns to live without her and be independent. Roshni is introduced to Rahul Malhotra (Rahul Roy), and they share a mutual attraction. When he learns that she is an aspiring singer, he assists in her career, so she becomes popular. She has a devoted fan named Jagannath, alias Jaggu (Sanjay Dutt), who is a petty thief. He is in love with her, but she rejects him. Roshni's mother reveals on her deathbed that Roshni's father is alive and had been forced to abandon his family over a government level criminal accusations exacerbated by Roshni's grandmother's reluctance to allow him back home. She tells Roshni that that she is free to go find her father. During a trip, she and Rahul take to Hong Kong to look for her father, Roshni is arrested for trafficking cocaine, and Rahul disappears. Jaggu brings an attorney, but she is quickly found guilty and sentenced to death, remanded to a prison where inmates are kept barefoot and in squalid conditions. Jaggu visits the prison and runs afoul of two guards, themselves lovers, who beat him in front of Roshni. The attorney works to help them escape. A fight ensues between Roshni and the female guard, in which the latter is killed. The warden intervenes and is killed by Jaggu, they escape and return to India. At the airport, Prakash is questioned by the police, and Roshni learns that he is her father, and that he had fled the country years earlier when he has been wrongfully accused of treason. Later at Rahul's house, Rahul admits that he had been dealing with drugs that resulted in Roshni's arrest. She slaps him for deceiving her and gets him arrested. With Prakash's blessings, Roshni and Jaggu get married.

The soundtrack for the film was the second successive hit (after Khalnayak ) for the music director duo Laxmikant–Pyarelal. [2] [3] When it screened in Nigeria, it is remarked that audiences loved and knew the film. "They cheered at tense points, thumping their seats and stamping their feet. At other points they mimicked dialogue and shouted out responses to the heroes and villains, the film was also well received at the Indian box office and was the seventh highest grossing Hindi film of 1993." [4]

ChaalBaaz (transl. Trickster) is a 1989 Indian slapstick film directed by Pankaj Parashar in a screenplay written by Rajesh Mazumdar and Kamlesh Pandey. The film stars Sridevi, Sunny Deol and Rajinikanth. Anupam Kher, Shakti Kapoor, Rohini Hattangadi and Anu Kapoor are featured in supporting roles. Loosely based on the 1973 film Seeta Aur Geeta, the film revolves around twin sisters separated at birth - Anju, who is badly treated and abused by her uncle and lives her life in servitude and Manju, who grows up to be a street smart girl defying the odds and challenging the patriarchal society. 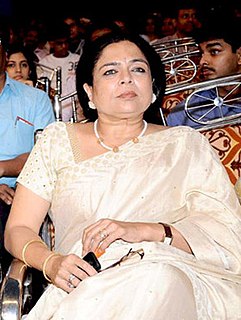 Shola Aur Shabnam is a 1992 Bollywood romantic-action-comedy film directed by David Dhawan and produced by Pahlaj Nihalani starring Govinda and Divya Bharti. The plot revolves around a NCC student Karan (Govinda), who along with his lady love Divya, proves his innocence after being falsely implicated into a murder case and consequent framed events by a notorious gangster Kali. Upon release, it emerged as the fourth highest-grossing film the year receiving positive reviews and was declared a 'Super Hit'. 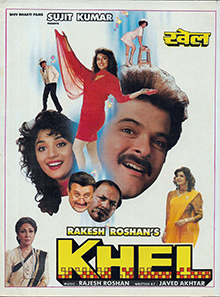 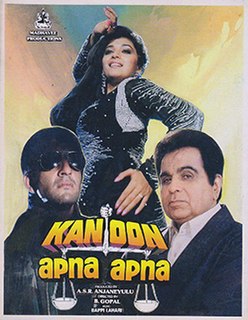 Kala Dhanda Goray Log is a 1986 Hindi-language action thriller film directed by Sanjay Khan, starring Sunil Dutt, Sanjay Khan, Anita Raj, Akbar Khan and Amrita Singh. The film's music was by Louis Banks and Laxmikant–Pyarelal, while the lyrics were by Anand Bakshi. The film was shot Chandivali Studio and Film City in Mumbai. This was Khan's last film, before shifting to television, acting and directing TV series like The Sword of Tipu Sultan (1990). The title of film became a popular phrase regarding corruption in high places.

Sahebzaade is a 1992 Bollywood action film, starring Sanjay Dutt and Neelam Kothari in the title roles, while some ensemble cast have supporting roles. The story is written by Ranbir Pushp.

Nishana is a 1980 Hindi-language action film, Produced by M. Arjuna Raju, A. S. R. Anjineelu under Roja Movies banner and directed by K. Raghavendra Rao. Starring Jeetendra, Poonam Dhillon and music composed by Laxmikant–Pyarelal. The film is remake of Telugu blockbuster film Vetagadu (1979), starring N.T.Rama Rao, Sridevi in the pivotal roles. Both the movies are made by same banner & director. 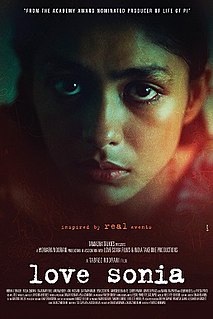