Maebashi is the capital and Takasaki is the largest city of Gunma Prefecture, with other major cities including Ōta, Isesaki, and Kiryū. [2] Gunma Prefecture is one of only eight landlocked prefectures, located northwestern corner of the Kantō Plain with 14% of its total land being designated as Natural Parks.

The ancient province of Gunma was a center of horsebreeding and trading activities for the newly immigrated continental peoples. The arrival of horses and the remains of horse-tackle coincides with the arrival of a large migration from the mainland. From this point forward, the horse became a vital part of Japanese military maneuvers, quickly displacing the older Yayoi tradition of fighting on foot.

When Mount Haruna erupted in the late 6th century, Japan was still in the pre-historical phase (prior to the importation of the Chinese writing system during the Nara period). The Gunma Prefectural archaeology unit in 1994 was able to date the eruption through zoological anthropology at the corral sites that were buried in ash.

In the past, Gunma was joined with Tochigi Prefecture and called Kenu Province . This was later divided into Kami-tsu-ke (Upper Kenu, Gunma) and Shimo-tsu-ke (Lower Kenu, Tochigi). The area is sometimes referred to as Jomo (上毛, Jōmō). For most of Japanese history, Gunma was known as the province of Kozuke. [3]

In the early period of contact between western nations and Japan, particularly the late Tokugawa, it was referred to by foreigners as the "Joushu States", inside (fudai, or loyalist) Tokugawa retainers and the Tokugawa family symbol is widely seen on public buildings, temples and shrines.

The first modern silk factories were built with Italian and French assistance at Annaka in the 1870s.

In the early Meiji period, in what was locally called the Gunma Incident of 1884, a bloody struggle between the idealistic democratic westernizers and the conservative Prussian-model nationalists took place in Gunma and neighboring Nagano. The modern Japanese army gunned down farmers with new repeating rifles built in Japan. The farmers in Gunma were said to be the first victims of the Murata rifle.

In the twentieth century, the Japanese aviation pioneer Nakajima Chikushi of Oizumi, Gunma Prefecture, founded the Nakajima Aircraft Company. At first, he produced mostly licensed models of foreign designs, but beginning with the all-Japanese Nakajima 91 fighter plane in 1931, his company became a world leader in aeronautical design and manufacture, with its headquarters at Ota, Gunma Ken. The factory now produces Subaru motorcars and other products under the name of Subaru née Fuji Heavy Industries.

In the 1930s, German architect Bruno Julius Florian Taut lived and conducted research for a while in Takasaki.

The Girard incident, which disturbed US-Japanese relations in the 1950s, occurred in Gunma in 1957, at Soumagahara Base near Shibukawa.

One of only eight landlocked prefectures in Japan, Gunma is the northwesternmost prefecture of the Kantō plain. Except for the central and southeast areas, where most of the population is concentrated, it is mostly mountainous. To the north are Niigata and Fukushima prefectures, while to the east lies Tochigi Prefecture. To the west lies the Nagano Prefecture, and the Saitama Prefecture is to the south.

Some of the major mountains in Gunma are Mount Akagi, Mount Haruna, Mount Myōgi, Mount Nikkō-Shirane and Mount Asama, which is located on the Nagano border. Major rivers include the Tone River, the Agatsuma River, and the Karasu River.

As of 1 April 2012, 14% of the total land area of the prefecture was designated as Natural Parks, namely Jōshin'etsu-kōgen, Nikkō, and Oze National Parks and Myōgi-Arafune-Saku Kōgen Quasi-National Park. [4]

See also: List of cities in Gunma Prefecture by population

Because Gunma is situated in inland Japan, the difference in temperature in the summer compared to the winter is large, and there is less precipitation. This is because of the kara-kaze ("empty wind"), a strong, dry wind which occurs in the winter when the snow falls on the coasts of Niigata. The wind carrying clouds with snow are obstructed by the Echigo Mountains, and it also snows there, although the high peaks do not let the wind go past them. For this reason, the wind changes into the kara-kaze.

Gunma's modern industries include transport equipment and electrical equipment, concentrated around Maebashi and the eastern region nearest Tokyo. More traditional industries include sericulture and agriculture. Gunma's major agricultural products include cabbages and konjacs. Gunma produces 90% of Japan's konjacs, and two-thirds of the farms in the village of Tsumagoi are cabbage farms. Also, the city of Ōta is famous for car industry, notably the Subaru factory.

As of 2018, Gunma is home to eleven of Japan's over thirty Melody Roads. 2,559 grooves cut into a 175-meter stretch of the road surface in transmit a tactile vibration through the wheels into the car body. [5] [6] [7] The roads can be found in Katashina, Minakami, Takayama, Kanna, Ueno, Kusatsu, Tsumagoi, Nakanojo, Takasaki, Midori, and Maebashi. Each is of a differing length and plays a different song. Naganohara also used to be home to a Melody Road playing “Aj, lučka lučka siroka”, though the road in question was paved over in 2013 due to noise complaints.

The sports teams listed below are based in Gunma.

Gunma is also famous for its ski resorts in the mountains.

Gunma was the only prefecture in Japan to have all 4 legal types of gambling on races: horse, bicycle, auto and boat. This changed with the closing of the last horse race track in Takasaki in 2004.

Gunma has many hot spring resorts and the most famous is Kusatsu Onsen. Another draw to the mountainous Gunma is the ski resorts.

For marketing, the Prefectural Government also uses Gunma-chan, a small super deformed drawing of a gendered horse character wearing a green cap. It is used on promotional posters, banners and other notable printed materials from the Prefectural Government. Other agencies and companies formally or informally use variations of its likeness and other horse-shaped characters when making signs or notices for work on buildings, roads, and other public notices. 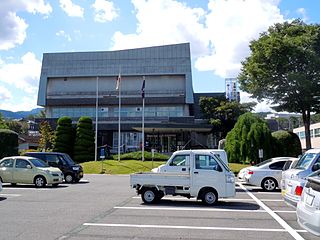 Shimonita is a town located in Gunma Prefecture, Japan. As of 31 August 2020, the town had an estimated population of 7,058 in 3292 households, and a population density of 37 persons per km². The total area of the town is 188.38 square kilometres (72.73 sq mi). Shimonita is famous for its konjac and Welsh onion.

Naganohara is a town located in Gunma Prefecture, Japan. As of 31 January 2020, the town had an estimated population of 5,495 in 5630 households, and a population density of 41 persons per km². The total area of the town is 133.85 square kilometres (51.68 sq mi). The controversial Yanba Dam project is located within Naganohara.

Minakami is a town located in Gunma Prefecture, Japan. As of 31 October 2020, the town had an estimated population of 18,383 in 7938 households, and a population density of 24 persons per km². The total area of the town is 781.08 square kilometres (301.58 sq mi). Much of the town is within the borders of Jōshin'etsu-kōgen National Park.

Mount Akagi is a mountain in Gunma Prefecture, Japan.

The Ryōmō Line is a Japanese railway line connecting Oyama in Tochigi Prefecture with Maebashi in Gunma Prefecture. 84.4 km (52.4 mi) long, the line is owned and operated by the East Japan Railway Company. The name refers to the fact that Gunma and Tochigi prefectures were once part of an ancient province called Keno (毛野), which was later split into Kōzuke (Gunma) and Shimotsuke (Tochigi). This line connects both halves of the old province. 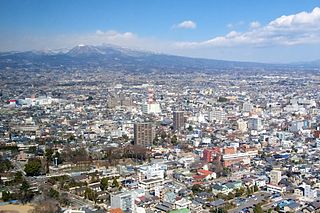 Maebashi is the capital city of Gunma Prefecture, in the northern Kantō region of Japan. As of 31 August 2020, the city had an estimated population of 335,352 in 151,171 households, and a population density of 1100 persons per km2. The total area of the city is 311.59 km2 (120.31 sq mi). It was the most populous city within Gunma Prefecture until Takasaki merged with nearby towns between 2006 and 2009. Maebashi is known to be the "City of Water, Greenery and Poets" because of its pure waters, its rich nature and because it gave birth to several Japanese contemporary poets, such as Sakutarō Hagiwara. 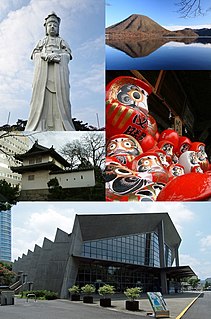 Takasaki is a city located in Gunma Prefecture, Japan. As of 31 August 2020, the city had an estimated population of 372,369 in 167,345 households, and a population density of 810 persons per km². The total area of the city is 459.16 square kilometres (177.28 sq mi). Takasaki is famous as the hometown of the Daruma doll, theoretically representing the Buddhist sage Bodhidharma and in modern practice a symbol of good luck. Making the largest city on prefecture (1990) after beating the Maebashi. 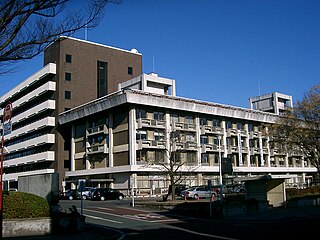 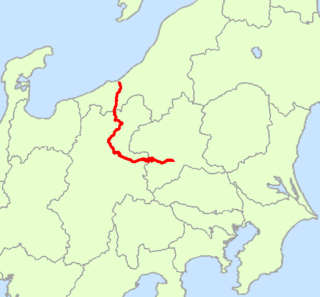 National Route 18 is a national highway connecting Takasaki, Gunma and Joetsu, Niigata in Japan. A section of the highway is designated as a part of the Japan Romantic Road.

The Jōshin-etsu Expressway is a national expressway in Japan. It is owned and operated by East Nippon Expressway Company. 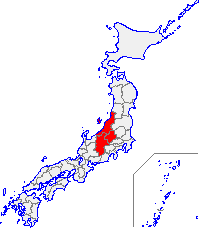 The Jōshin'etsu region is a region on the main Japanese island of Honshu, comprising parts of Gunma, Nagano, and Niigata Prefectures. It is a mountainous area with a large national park and numerous hot springs and ski resorts. It has long been a transportation corridor between the Kantō plain and coastal areas on the Japan Sea side of the island.