The Gurung people, also called Tamu, are an ethnic group in the hills and mountains of Gandaki Province of Nepal. [1] They live in Manang, Mustang, Kaski, Lamjung, Parbat, Dolpo and Syangja, Dhading districts, with a population of 522,641 people as of 2011. [2] They speak the Sino-Tibetan Gurung language.

According to their legend, the Gurung were a wandering tribe that traversed west across Tibet prior to their entry into Mustang. Their Tibetan Sojourn pre-dates the introduction of Buddhism there in the 7th century as the Gurung religious traditions are basically animistic. They celebrate their feasts and festivals and carry out the ceremonies and practices related to worship, birth, death and marriage in accordance with the Bon and Buddhist religion.

Losar is the main and biggest festival of Gurung, observed it as a New Year at the end of December, according to the ancient calendar of western Tibet. Their main occupation is animal husbandry, including the raising of sheep and hunting. Lately they have a fame of joining British army and renowned as Gorkha soldier. [3]

Gurung is a surname among people of the Gurung Tamu ethnic group in Nepal. Notable individuals with the surname include:

Surname list
This page lists people with the surname Gurung people.
If an internal link intending to refer to a specific person led you to this page, you may wish to change that link by adding the person's given name(s) to the link.

The Magar, also spelled as Mangar, and Mongar, are the third largest ethnolinguistic groups of Nepal representing 7.1% of Nepal's total population according to the Nepal census of 2011.

Gorkha Kingdom was a Khas kingdom in the confederation of 24 states known as Chaubisi rajya, on the Indian subcontinent, present-day western Nepal. The Kingdom of Gorkha extended from the Marshyangdi River in the west to the Trishuli River in the east, which separated it from the kingdoms of Lamjung and Nepal respectively. The Gorkha Kingdom was established by Prince Dravya Shah, second son of King Yasho Brahma Shah of Lamjung Kingdom, in 1559 CE replacing the Khadka chiefs.

The Tamang are an tibeto ethnic group originating in Tibet. In Nepal Tamang/moormi people constitute 5.6% of the Nepalese population at over 1.3 million in 2001, increasing to 1,539,830 as of the 2011 census. Tamang people are also found in significant numbers in the Indian state of Sikkim and districts of Darjeeling and Kalimpong in West Bengal state of India and various districts in the southern foothills of the Kingdom of Bhutan. Such districts include the Tsirang District, the Dagana District, the Samtse District, the Chukha District, the Sarpang District and the Samdrup Jongkhar District. Tamang tibeto language is the fifth most spoken language in Nepal. 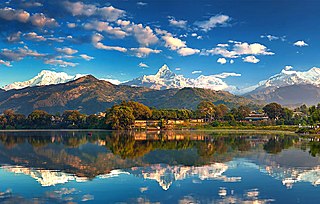 Pokhara is a metropolitan city in Nepal, which serves as the capital of Gandaki Province. It is the second most populous city of Nepal after Kathmandu, with 518,452 inhabitants living in 101,669 households in 2021. It is the country's largest metropolitan city in terms of area. The city also serves as the headquarters of Kaski District. Pokhara is located 200 kilometres west of the capital, Kathmandu. The city is on the shore of Phewa Lake, and sits at an elevation of approximately 822m. The Annapurna Range, with three out of the ten highest peaks in the world—Dhaulagiri, Annapurna I and Manaslu—is within 15–35 mi (24–56 km) of the valley.

Lamjung District, a part of Gandaki Province, is one of the 77 districts of Nepal. The district, with Besisahar as its district headquarters, covers an area of 1,692 square kilometres (653 sq mi) and as of 2011 had a population of 167,724. Lamjung lies in the mid-hills of Nepal spanning tropical to trans-Himalayan geo-ecological belts, including the geographical midpoint of the country. It has mixed habitation of casts and ethnicities. It is host to probably the highest density of the Gurung ethnic population in the country.

Rana dynasty is a Chhetri dynasty that imposed totalitarianism in the Kingdom of Nepal from 1846 until 1951, reducing the Shah monarch to a figurehead and making Prime Minister and other government positions held by the Ranas hereditary. They claimed Kshatriya status themselves. Rana dynasty is historically known for the iron-fisted rule. This changed after the Revolution of 1951 with the promulgation of a new constitution, when power shifted back to the monarchy of King Tribhuvan.

Gurung is a surname among people of the GurungTamu ethnic group in Nepal. Notable individuals with the surname include:

Gunjanagar is a town in Bharatpur, Chitwan in Bagmati Province of southern Nepal. The former Gunjanagar VDC and Saradanagar VDC were merged on 18 May 2014 to form new Chitrawan Municipality, which later was merged with Bharatpur. At the time of the 1991 Nepal census it had a population of 11,076 people living in 2025 individual households.

Dr. Harka Bahadur Gurung (1939–2006) was a Nepali geographer, author, and politician, known for his conservation work. 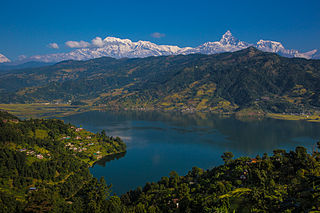 Gandaki ProvinceListen (help·info)), is one of the seven federal provinces established by the current constitution of Nepal which was promulgated on 20 September 2015. Pokhara is the province's capital city. It borders the Tibet Autonomous Region of China to the north, Bagmati Province to the east, Karnali Province to the west, and Lumbini Province and Bihar of India to the south. The total area of the province is 21,504 km2 - about 14.57% of the country's total area. According to the latest census, the population of the province was 2,403,757. The newly elected Provincial Assembly adopted Gandaki Province as the permanent name by replacing its initial name Province no. 4 in July 2018. Krishna Chandra Nepali is the present chief minister of Gandaki Province

Vamsharaj Pande was a Nepalese politician, military officer and minister of state. He was a significant army commander of Kingdom of Nepal in the second half of 18th century. He was a follower of Bahadur Shah of Nepal and had a significant rivalry with Swaroop Singh Karki.

Swarup Singh Karki or Swaroop Singh Karki, was a Nepali politician, courtier, military commander and minister. He was popular for his singing prowess and court conspiracies. He was selected as Dewan in the reign of King Pratap Singh Shah and a significant politician in the regent rule of Queen Rajendra of Nepal. He was one of the most influential court politician in the rule of King Pratap Singh and Queen Rajendralaxmi others being his rival Bahadur Shah of Nepal and Vamsharaj Pande. Vamsharaj was his perceived career rival. His life and career ended when Prince Bahadur Shah was appointed as regent in 1785.