Gustav Adolph Hagemann (16 May 1842 –26 April 1916) was a Danish engineer and businessman. He was chief technical officer of the Danish Sugar Factories from 1872 to 1897 and then served as chairman of the board until 1916. He owned several sugar plantations on Saint Croix in the Danish West Indies.

Hagemann was born on the Rodsteenseje estate at Odder in 1842,the son of Otto Waldemar Hagemann (1809–1890) and Sophie Marie Poulsen (1815–1901). His father owned the estate until 1857 when he returned to Holstein. Hagemann went to school in Aarhus before studying Applied Sciences at the College of Advanced Technology in Copenhagen from 1860 to 1865.

Hagemann was employed by the Øresund cryolite factory (Øresunds chemiske Fabriker,Kryolitfabrikken) in 1864. In 1865,when he had completed his exams,Kryolit Mine og Handelsselskabet sent him to the US to oversee the deliveries of cryolite to the Pennsylvania Salt Manufacturing Company. In early 1856,he travelled to the US to provide technical support in connection with the first deliveries of cryolite from Greenland.

With inspiration from David Alter's nearby production site,Hagemann began to work on improving methods to manufacture and purify bromine from salt wells. He obtained several patents and in the spring of 1868 established his first plant in Pomeroy,Ohio.

During a visit to Europe in the summer of 1869,C. F. Tietgen convinced Hagemann to purchase the Øresund cryolite factory in a partnership with Vilhelm Jørgensen (1844–1925). Hagemann then sold his bromine manufacturing activities in the US and settled permanently in Denmark. [1]

Hagemann and Vilhelm Jørgensen also constructed Hinnerup Natroncellulosefabrik for Count Mogens Frijs and operated it on a ten-year lease. They also established Drakulla Cellulosefabrik in Småland,Sweden.

When De Danske Sukkerfabrikker ('The Danish Sugar Factories') were founded in 1872,Tietgen selected Hagemann for the position as chief chemist (Danish:overkemiker) in the new company. Hagemann oversaw the construction of the company's first manufacturing site,Sukkerkogeriet Odense,in Odense,which began operations in 1873–1874. He was then sent to the Danish West Indies to reorganize the sugar cane industry. St. Croix Fællessukkerkogeri started operations in 1878 and the last technical challenges were solved when Hagemann visited St. Croix for the third time in 1879.

Hagemann,who was appointed to chief technical officer in 1882,was also responsible for planning the new sugar manufacturing plants in Nakskov (1881),Assens (1883) and Stege (1883).

Hagemann retired from the position as chief technical officer of De Danske Sukkerfabrikker in 1897 but then served as chairman of the company from 1898 until his death.

Hagemann had also joined the board of Burmeister &Wain in 1893 and became its chairman in 1898. The company was then reorganized and outdated machinery was modernized. He was also involved in the establishment of the first Danish steel works and introduced a new focus on diesel engines.

Hagemann was a member of a number of important boards and commissions. He was a co-founder of the Danish Association of Engineers and served as its president from 1895 to 1898. He was president of the Danish College of Advanced Technology from 1902 to 1912. He was also a member of Copenhagen City Council from 1882 to 1902.

He supported Niels Finsen economically and contributed to the fight against tuberculosis. He founded G.A. Hagemanns Kollegium and created a number of associated grants for students in 1928. It was the first dormitory in Copenhagen that was open to both male and female residents.

Hagemann purchased Borupgård at Snekkersten in 1899. In 1911 he also acquired Bergsjöholm in Scania. He died at Borupgård on 26 April 1916 and is buried at Vestre Cemetery in Copenhagen. [2]

He left three children. The elder of the two sons,Gunnar Aage Hagemann (1877–1971),was a medical doctor. He inherited Bergsjöholm from his father and was also the owner of Søbækgaard in Espergærde,Ristrup in Jutland (1908–1916) and Ruuthsbo in Scania. His daughter,Antonie Sophie Hagemann (1879–1054),married the physician and chemist Karl Albert Hasselbalch. They owned Borupgård. The younger son,Paul Olaf Hagemann (1882–1067),married Elisabeth Marie Gammeltoft (1886–1925),a daughter of his father's colleague Carl Gammeltoft. 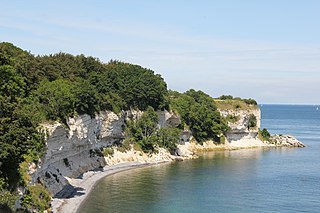 Assens is a town with a population of 6,060 on the west coast of the island of Funen on the eastern side of the Little Belt in central Denmark. By road,Assens is located 41.2 kilometres (25.6 mi) southwest of Odense,34 kilometres (21 mi) northwest of Faaborg,and 33.34 kilometres (20.72 mi) southeast of Middelfart. Assens is the municipal seat of Assens Municipality in Region of Southern Denmark. It was the birthplace of sculptor Jens Adolf Jerichau who married the well-known portraitist Elisabeth Jerichau-Baumann;both artists' works are exhibited at the local art museum,Vestfyns Kunstmuseum. 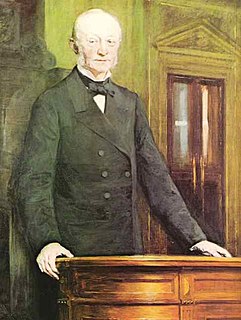 Carl Frederik Tietgen was a Danish financier and industrialist. He played an important role in the industrialisation of Denmark as the founder of numerous prominent Danish companies,many of which are still in operation today. Tietgen notably formed conglomerates,thus several of Tietgen's companies attained monopoly-like status,cementing their durability.

La Grange is a settlement on the island of Saint Croix in the United States Virgin Islands. 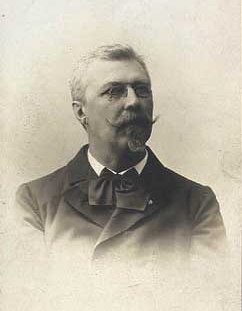 Albert Jensen was a Danish architect. He collaborated with Ferdinand Meldahl on several projects,including the completion of Marble Church in Copenhagen and Charlottenborg Exhibition Hall. He also designed the Magasin du Nord department store on Kongens Nytorv.

Lauritz Peter Holmblad,often referred to as L. P. Holmblad,was a Danish industrialist and philanthropist. His company,which was simply known as L. P. Holmblad,had activities in dyes,soap,glue and plating cards. Holmblad was also part of the circle around Carl Frederik Tietgen,co-founding several of his companies.

Århusgade is a street in the Østerbro district of Copenhagen,Denmark. It extends east from Østerbrogade and passes under the railway just before entering the southernmost part of Nordhavn which is known as the Århusgade neighbourhood after it. The street has many cafés and small shops. The street is named after the City of Aarhus,the second largest city in Denmark. 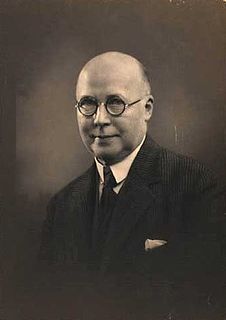 Hjalmar Kjær was a Danish architect who worked extensively in Odense and made notable contributions to architecture in Denmark in the 19th and 20th centuries. HJalmar Kjær was the son of soap manufacturer Hans Kjær and Kathrine Rasmussen. He attended a technical college before he was admitted to the preparatory course of the Royal Danish Academy of Fine Arts in 1894 and graduated as an architect in May 1896.

Ole Berendt Suhr was a Danish merchant,investor,landowner and philanthropist.

De Danske Sukkerfabrikker was a Danish sugar manufacturing company established in 1872 in Copenhagen,Denmark. It played a central role in the development of a thriving Danish sugar industry based on sugar beets from Lolland-Falster,Møn and Funen. The company merged with Danisco and De Danske Spritfabrikker in 1989. It then continued as Danisco Sugar Sector until 2011,when it was acquired by Nordzucker and renamed Nordic Sugar.

Erhard Frederiksen was a Danish agronomist and sugar manufacturer. He is considered one of the most significant writers on agricultural economics of his time in Denmark. He was a co-founder of a sugar factory at Holeby on Lolland in 1872–1874,which was later taken over by the Danish Sugar Factories under the name Højbygaard Sugar Factory.

Holger Petersen was a Danish businessman and philanthropist. 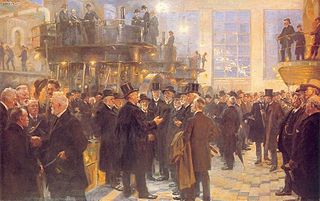 Men of Industry is a 1893–1904 oil on canvas group portrait painting by Peder Severin Krøyer (1851–1909) featuring 53 leading representatives of the technical sciences in Denmark during the second half of the 19th century,seen at a fictional gathering at Østerbro Power Station in Copenhagen. The painting was commission by Gustav Adolph Hagemann and is now on display in the Museum of National History at Frederiksborg Castle,Hillerød.

From Copenhagen Stock Exchange is a monumental 1895 oil on canvas group portrait painting by Peder Severin Krøyer,featuring 50 representatives of the Danish commercial and financial industries gathered in the Great Hall of the Exchange Building in Copenhagen,Denmark.

Louis Meyer was a Danish businessman. His company,Beckett &Meyer,a wholesale company,was after his death continued by his son Ernst Meyer.

Carl Gammeltoft was a Danish business executive. He served as managing director of De Danske Sukkerfabrikker from 1882 to 1922.