Dodson graduated from the University of New Zealand where he was awarded a Bachelor of Science and Doctor of Philosophy degrees.

Dodson did postdoctoral research with Dorothy Hodgkin at the University of Oxford. [10] [11] [12] [13] He devised along with Hodgkin, very intricate experimental, crystallographic and computer techniques that led to the final solution of the structure of insulin. Dodson was head of the structural biology laboratories at the University of York and National Institute for Medical Research, London. During his career he collaborated with many scientists [9] including Dale Wigley, Gideon Davies, [4] Andrzej Brzozowski, [14] Leo Brady [15] and Max Perutz. [16]

Dodson was elected a Fellow of the Royal Society (FRS) [17] in 1994. His nomination reads

Guy Dodson's major researches have been concerned with the Xray analysis of a variety of crystalline proteins many now being carried out with increasing speed and accuracy through the use of synchrotron radiation. His most considerable work, on insulin, extends from his part in the first solution of the 2 zinc insulin crystal structure to the refeinement of the atomic parameters of both protein and water moledules at 1.5A resolution. He has recently explored remarkable conformational variations of the insulin molecule under different conditions, which give rise to three different hexamers, dimers at different pH and a monomeric despentapeptide insulin. He is at present investigating structure activity relations of genetically engineered varieties of insulin. Other systems he has studied include a series of bacterial ribonucleases and the T state of haemoglobin as seen in the partially liganded T alpha oxy beta deoxy, T alpha met beta met and T alpha deoxy beta deoxy human haemoglobins, crystallised from polyethyleneglycol. It is characteristic of him that he has created a laboratory to which protein crystals are brought from all over the world and their structures solved. [18]

Dodson was also a Foreign Member of the Indian National Science Academy (ForMemINSA) and the Academy of Medical Sciences (FMedSci).

He was a recipient of the RSC Structural Chemistry Award in 1991.

Dodson was married to the scientist Eleanor Dodson with whom he had four children. [1]

Insulin is a peptide hormone produced by beta cells of the pancreatic islets; it is considered to be the main anabolic hormone of the body. It regulates the metabolism of carbohydrates, fats and protein by promoting the absorption of glucose from the blood into liver, fat and skeletal muscle cells. In these tissues the absorbed glucose is converted into either glycogen via glycogenesis or fats (triglycerides) via lipogenesis, or, in the case of the liver, into both. Glucose production and secretion by the liver is strongly inhibited by high concentrations of insulin in the blood. Circulating insulin also affects the synthesis of proteins in a wide variety of tissues. It is therefore an anabolic hormone, promoting the conversion of small molecules in the blood into large molecules inside the cells. Low insulin levels in the blood have the opposite effect by promoting widespread catabolism, especially of reserve body fat.

Dorothy Mary Crowfoot Hodgkin was a Nobel Prize-winning British chemist who advanced the technique of X-ray crystallography to determine the structure of biomolecules, which became an essential tool in structural biology.

Lipoprotein lipase (LPL) is a member of the lipase gene family, which includes pancreatic lipase, hepatic lipase, and endothelial lipase. It is a water-soluble enzyme that hydrolyzes triglycerides in lipoproteins, such as those found in chylomicrons and very low-density lipoproteins (VLDL), into two free fatty acids and one monoacylglycerol molecule. It is also involved in promoting the cellular uptake of chylomicron remnants, cholesterol-rich lipoproteins, and free fatty acids. LPL requires ApoC-II as a cofactor. 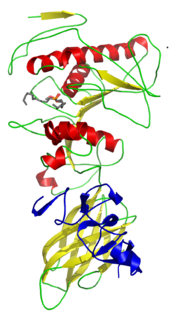 Colipase, abbreviated CLPS, is a protein co-enzyme required for optimal enzyme activity of pancreatic lipase. It is secreted by the pancreas in an inactive form, procolipase, which is activated in the intestinal lumen by trypsin. Its function is to prevent the inhibitory effect of bile salts on the lipase-catalyzed intraduodenal hydrolysis of dietary long-chain triglycerides.

Sir Thomas Leon Blundell, is a British biochemist, structural biologist, and science administrator. He was a member of the team of Dorothy Hodgkin that solved in 1969 the first structure of a protein hormone, insulin. Blundell has made contributions to the structural biology of polypeptide hormones, growth factors, receptor activation, signal transduction, and DNA double-strand break repair, subjects important in cancer, tuberculosis, and familial diseases. He has developed software for protein modelling and understanding the effects of mutations on protein function, leading to new approaches to structure-guided and Fragment-based lead discovery. In 1999 he co-founded the oncology company Astex Therapeutics, which has moved ten drugs into clinical trials. Blundell has played central roles in restructuring British research councils and, as President of the UK Science Council, in developing professionalism in the practice of science.

The cyclol hypothesis is the first structural model of a folded, globular protein. It was developed by Dorothy Wrinch in the late 1930s, and was based on three assumptions. Firstly, the hypothesis assumes that two peptide groups can be crosslinked by a cyclol reaction ; these crosslinks are covalent analogs of non-covalent hydrogen bonds between peptide groups. These reactions have been observed in the ergopeptides and other compounds. Secondly, it assumes that, under some conditions, amino acids will naturally make the maximum possible number of cyclol crosslinks, resulting in cyclol molecules and cyclol fabrics. These cyclol molecules and fabrics have never been observed. Finally, the hypothesis assumes that globular proteins have a tertiary structure corresponding to Platonic solids and semiregular polyhedra formed of cyclol fabrics with no free edges. Such "closed cyclol" molecules have not been observed either.

Eleanor Joy Dodson FRS is an Australian-born biologist who specialises in the computational modelling of protein crystallography. She holds a chair in the Department of Chemistry at the University of York. She is the widow of the scientist Guy Dodson.

A HEAT repeat is a protein tandem repeat structural motif composed of two alpha helices linked by a short loop. HEAT repeats can form alpha solenoids, a type of solenoid protein domain found in a number of cytoplasmic proteins. The name "HEAT" is an acronym for four proteins in which this repeat structure is found: Huntingtin, elongation factor 3 (EF3), protein phosphatase 2A (PP2A), and the yeast kinase TOR1. HEAT repeats form extended superhelical structures which are often involved in intracellular transport; they are structurally related to armadillo repeats. The nuclear transport protein importin beta contains 19 HEAT repeats.

Brian Kent Kobilka is an American physiologist and a recipient of the 2012 Nobel Prize in Chemistry with Robert Lefkowitz for discoveries that reveal the workings of G protein-coupled receptors. He is currently a professor in the department of Molecular and Cellular Physiology at Stanford University School of Medicine. He is also a co-founder of ConfometRx, a biotechnology company focusing on G protein-coupled receptors. He was named a member of the National Academy of Sciences in 2011.

A lipase is any enzyme that catalyzes the hydrolysis of fats (lipids). Lipases are a subclass of the esterases.

Peter Malcolm Colman is the head of the structural biology division at the Walter and Eliza Hall Institute of Medical Research in Melbourne, Australia. 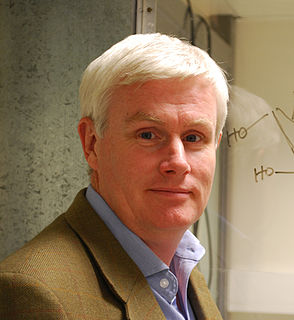 Gideon John Davies FRS FRSC FMedSci in the York Structural Biology Laboratory (YSBL) at the University of York, UK. Davies is best known for his ground-breaking studies into carbohydrate-active enzymes, notably analysing the conformational and mechanistic basis for catalysis and applying this for societal benefit. In 2016 Davies was made the Royal Society Ken Murray Research Professor at the University of York.

Kiyoshi Nagai was a Japanese structural biologist at the MRC Laboratory of Molecular Biology Cambridge, UK. He was known for his work on the mechanism of RNA splicing and structures of the spliceosome.