Guyenne or Guienne ( /ɡiˈjɛn/ , French:  [ɡjɛn] ; Occitan : Guiana [ˈɡjanɔ] ) was an old French province which corresponded roughly to the Roman province of Aquitania Secunda and the archdiocese of Bordeaux.

The name "Guyenne" comes from Aguyenne, a popular transformation of Aquitania. [1] In the 12th century it formed, along with Gascony, the duchy of Aquitaine, which passed under the dominion of the kings of England by the marriage of Eleanor of Aquitaine to Henry II. [2]

In the 13th century, through the conquests of Philip II, Louis VIII and Louis IX, Guyenne was confined within the narrower limits fixed by the treaty of Paris (1259) and became distinct from Aquitaine. Guyenne then comprised the Bordelais (the old countship of Bordeaux), the Bazadais, part of Périgord, Limousin, Quercy and Rouergue and the Agenais ceded by Philip III to Edward I in the treaty of Amiens (1279). Still united with Gascony, it formed a duchy extending from the Charentes to the Pyrenees. This duchy was held as a fief on the terms of homage to the French kings and, both in 1296 and 1324, it was confiscated by the kings of France on the ground that there had been a failure in the feudal duties. [2]

At the treaty of Brétigny (1360), King Edward III of England acquired the full sovereignty of the duchy of Guyenne, together with Aunis, Saintonge, Angoumois and Poitou. The victories of Bertrand du Guesclin and Gaston III, Count of Foix, restored the duchy soon after to its 13th-century limits. In 1451, it was conquered and finally united to the French crown by Charles VII. In 1469, Louis XI gave it in exchange for the territories of Champagne and Brie to his brother Charles, Duke of Berry, after whose death in 1472 it was again united to the royal domain. [2]

Guyenne then formed a government (gouvernement général) which from the 17th century onwards was united with Gascony. [2] In 1779, Louis XVI convened the provincial assemblies of Guyenne and considered expanding the assembly to other provinces, but abandoned this idea after experiencing the opposition of the privileged classes in Guyenne. [3] The government of Guyenne and Gascony (Guienne et Gascogne), with its capital at Bordeaux, lasted until the end of the Ancien Régime (1792). Under the French Revolution, the departments formed from Guyenne proper were those of Gironde, Lot-et-Garonne, Dordogne, Lot, Aveyron and the chief part of Tarn-et-Garonne. [2]

Aquitaine, archaic Guyenne or Guienne, is a historical region of southwestern France and a former administrative region of the country. Since 1 January 2016 it has been part of the region of Nouvelle-Aquitaine. It is situated in the southwest corner of Metropolitan France, along the Atlantic Ocean and the Pyrenees mountain range on the border with Spain, and for most of its written history Bordeaux has been a vital port and administrative center. It is composed of the five departments of Dordogne, Lot-et-Garonne, Pyrénées-Atlantiques, Landes and Gironde. Gallia Aquitania was established by the Romans in ancient times and in the Middle Ages, Aquitaine was a kingdom and a duchy, whose boundaries fluctuated considerably. 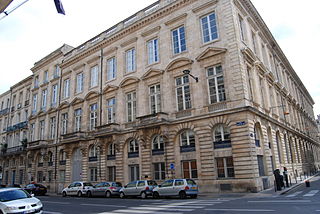 Gascony was a province of the southwestern Kingdom of France that succeeded the Duchy of Gascony (602–1453). From the 17th century until the French Revolution (1789–1799), it was part of the combined Province of Guyenne and Gascony. The region is vaguely defined, and the distinction between Guyenne and Gascony is unclear; by some they are seen to overlap, while others consider Gascony a part of Guyenne. Most definitions put Gascony east and south of Bordeaux. 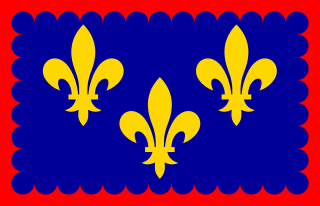 The Duchy of Berry was a former province located in central France. It was a province of France until departments replaced the provinces on 4 March 1790, when Berry became divided between the départements of Cher and Indre.

The Duke of Aquitaine was the ruler of the medieval region of Aquitaine under the supremacy of Frankish, English, and later French kings.

The Treaty of Brétigny was a treaty, drafted on 8 May 1360 and ratified on 24 October 1360, between Kings Edward III of England and John II of France. In retrospect, it is seen as having marked the end of the first phase of the Hundred Years' War (1337–1453) as well as the height of English power on the European continent. 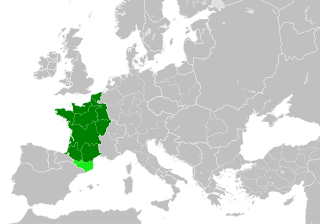 The Duchy of Aquitaine was a historical fiefdom in western, central, and southern areas of present-day France to the south of the river Loire, although its extent, as well as its name, fluctuated greatly over the centuries, at times comprising much of what is now southwestern France (Gascony) and central France.

The County of Armagnac, situated between the Adour and Garonne rivers in the lower foothills of the Pyrenées, was a historic county of the Duchy of Gascony, established in 601 in Aquitaine. In 960, the title of 'Count of Armagnac' was established, and thus the County of Armagnac was created. In 1751, following the death of childless Charles de Lorraine, Comte d'Armagnac, the county was absorbed into the Crown lands of France and the King, then Louis XV took the title of 'Count of Armagnac'. In 1791, following the Decree dividing France into departments, the county was disestablished, but remains an important natural region of France. 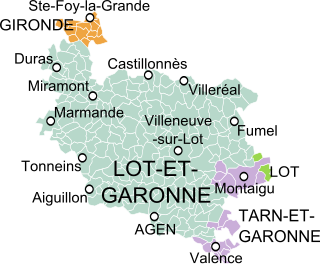 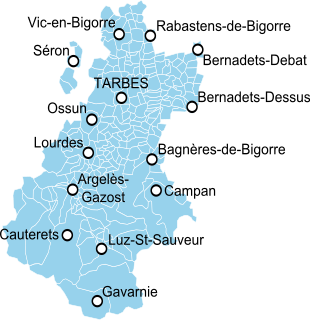 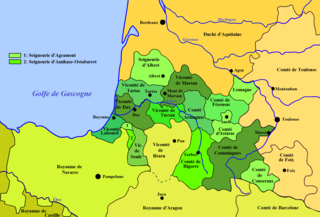 The Duchy of Gascony or Duchy of Vasconia was a duchy located in present-day southwestern France and northeastern Spain, an area encompassing the modern region of Gascony. The Duchy of Gascony, then known as Wasconia, was originally a Frankish march formed to hold sway over the Basques. However, the duchy went through different periods, from its early years with its distinctively Basque element to the merger in personal union with the Duchy of Aquitaine to the later period as a dependency of the Plantagenet kings of England. 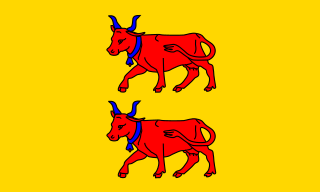 The Hundred Years' War was a series of armed conflicts between the kingdoms of England and France during the Late Middle Ages. It originated from disputed claims to the French throne between the English House of Plantagenet and the French royal House of Valois. Over time, the war grew into a broader power struggle involving factions from across Western Europe, fuelled by emerging nationalism on both sides. The Château de Langoiran is located in the district of Bordeaux in Gironde, in Langoiran, Aquitaine, France. The "donjon" of the castle is one of the largest in France. It overlooks the Garonne Valley and offers a good view for visitors. It has been listed as a French Monument Historique since May 1892. 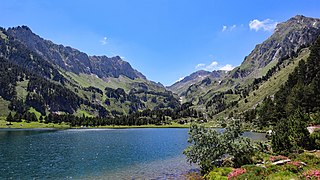 Occitania is the southernmost administrative region of metropolitan France excluding Corsica, created on 1 January 2016 from the former regions of Languedoc-Roussillon and Midi-Pyrénées. The Council of State approved Occitania as the new name of the region on 28 September 2016, coming into effect on 30 September 2016.

The Flag of Gascony represents the region of Gascony, located in France. The legend says that this flag appeared in the time of Pope Clement III to gather the Gascons during the Third Crusade, but no proof of this allegation has yet been found. The Chronica of Rogeri de Houedene, often taken as a proof for the creation of this flag, only mentions the crosses taken by the crusaders of three nations: the French, the English and the Flemish. 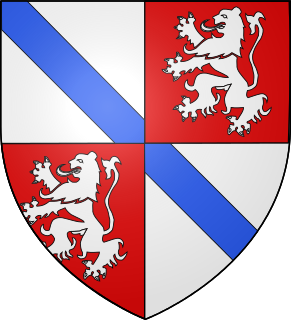 Gaillard IV de Durfort, Lord of Duras, was a 15th-century Gascon noble of the Durfort family.