listen ); German : Jula; Romanian : Jula or Giula; Turkish : Göle) is a town in Békés County, Hungary. The town is best known for its Medieval castle and a thermal bath. Ferenc Erkel, the composer of the Hungarian national anthem, and Albrecht Dürer the Elder, the father of Albrecht Dürer, were also born in Gyula. [4]

Gyula is located in the Great Hungarian Plain on the River Fehér-Körös, 235 km (146 mi) southeast from Budapest and 5 km (3 mi) from the border with Romania. The Békéscsaba-Gyula-Kötegyán railway line and Highway 44 also cross the town. Highway 44 is a four-lane expressway between Gyula and the county seat Békéscsaba. [5]

Gyula is named after the Medieval Hungarian ruler Gyula III. [4] Gyula was also a title among the Hungarian tribes and still a popular given name for boys.

The first recorded reference to Gyula was in a document dated 1313 which mentions a monastery called Gyulamonostora (Julamonustra in Latin). By 1332 the settlement around the monastery was called Gyula. The construction of Gyula Castle began in the 14th century but finished only in the mid-16th century. [4] It was the property of the Maróthy family and later John Corvinus, the illegitimate son of Matthias Corvinus. [4] Turks conquered Gyula in 1566 and the town remained part of the Ottoman Empire until liberated by Christian troops in 1694. [4] Due to the wars, most of the native Hungarian population fled from Gyula and Békés County became near uninhabited. [6] The landowner János Harruckern invited German, Hungarian, and Romanian settlers, who re-established the town in the early 18th century. [4] Gyula became a popular tourist destination in the 20th century. The thermal bath was established in 1942 and expanded in 1959, and the castle was restored in 1962. [4]

The current mayor of Gyula is Dr. Ernő István Görgényi of the Fidesz-KDNP party.

The local Municipal Assembly has 14+1 members divided into this political parties and alliances: [9]

Gyula is twinned with: 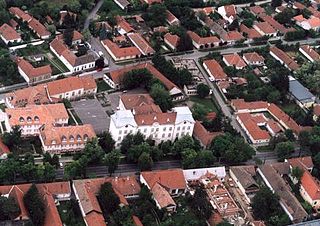 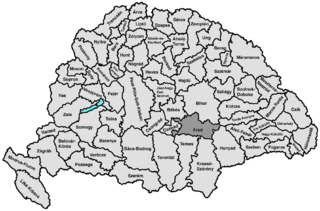 Józsefváros is the 8th district of Budapest, Hungary. It is the part of the city centre in the wider sense as one of the 18–19th century older suburbs, close to Belváros. 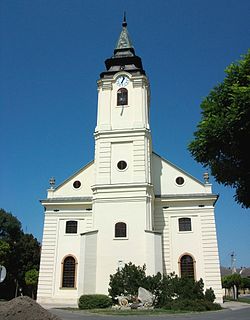 Gyomaendrőd is a town in Békés county, Hungary.

Mezőberény is a town in Békés county, Hungary. 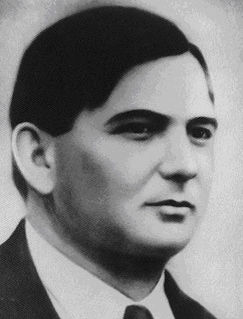 Imre Bródy was a Hungarian physicist who invented in 1930 the krypton-filled fluorescent lamps , with fellow-Hungarian inventors Emil Theisz, Ferenc Kőrösy and Tivadar Millner. He developed the technology of the production of krypton bulbs together with Michael Polanyi. He was the nephew of writer Sándor Bródy. 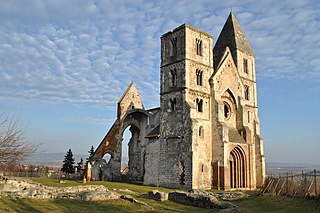 Zsámbék is a town in Pest County, in Hungary.

The Yellow Foal is a 1913 Hungarian silent drama film directed by Félix Vanyl and starring Lili Berky, Gyula Nagy and Victor Varconi. It is known by several alternative titles including Son of the Pusta and The Secret of a Blind Man. The film was made by producer Jenő Janovics in partnership with the French company Pathé. The film was a massive success and was exported to nearly forty countries worldwide. On the back of the film's success Janovics built his Corvin Film company into a leading studio, attracting talented Hungarian actors, writer and technicians away from the capital Budapest to work for him in Kolozsvár.

Gyula Koi is a Hungarian legal scholar and lecturer. His main research fields are administrative law, and theory of public administration. His Chinese name is Guo Yi.

The Arad Chapter was a collegiate chapter, established in the 12th century, in the Kingdom of Hungary. It was dedicated to Saint Martin of Tours. The chapter was under the direct jurisdiction of the archbishop of Esztergom. It held landed property in at least seven counties. From the 1220s, the chapter was a place of authentication.

The Hungarian Athletics Association is the governing body for the sport of athletics in Hungary.

Gyula is a district in eastern part of Békés County. Gyula is also the name of the town where the district seat is found. The district is located in the Southern Great Plain Statistical Region.