Hämeenlinna (Finnish:  [ˈhæmeːnˌlinːɑ] ; Swedish : Tavastehus; Karelian : Hämienlinna; Latin : Tavastum or Croneburgum [6] ) is a city and municipality of about 68,000 inhabitants [2] in the heart of the historical province of Tavastia and the modern province of Kanta-Häme in the south of Finland. Hämeenlinna is the oldest inland city of Finland and was one of the most important Finnish cities until the 19th century. It still remains an important regional center.

Hämeenlinna is the birthplace of composer Jean Sibelius. Today, it belongs to the region of Tavastia Proper (Kanta-Häme), and before 2010 it was the residence city for the Governor of the province of Southern Finland. Nearby cities include the capital Helsinki (98 km or 61 mi), Tampere (73 km or 45 mi) and Lahti (72 km or 45 mi), the regional center of Päijänne Tavastia (Päijät-Häme).

The medieval Häme Castle (Hämeen linna) is located in the city. The municipalities of Hauho, Kalvola, Lammi, Renko and Tuulos were consolidated with Hämeenlinna on 1 January 2009; with these municipal associations, the Hattula municipality is almost completely surrounded by Hämeenlinna.

There are a total of 339 lakes in whole or in part in the area of the city of Hämeenlinna. The largest of them are Lake Vanajavesi, Lake Kukkia and Lake Kuohijärvi. [7] The main features of the Hämeenlinna landscape are the Häme Lake Plateau, the Vanajavesi Valley and the Kanta-Häme Grove Center. In many places, the landscapes are marked by the prosperous Tavastian agricultural culture. [8] [9]

There was a settlement called Vanaja by the Lake Vanajavesi where the city now stands since the Viking Age. The castle was built in the late 13th century to secure Swedish power in central Finland. A village was established near Häme Castle to provide services and goods to its inhabitants.

The village was granted city rights in 1639 and soon after that the King of Sweden moved it one kilometre (0.6 miles) south to the hill on which it still stands. The city is known for its schools and academies where many famous Finns have studied. Schools, government and the military have characterised the life of Hämeenlinna throughout history. Finland's first railway line, the Finnish Main Railway  [ fi ] (Finnish : Suomen päärata, Swedish : Finlands stambanan), opened between Hämeenlinna and Helsinki in 1862. [10] The current Hämeenlinna railway station (Rautatieasema in Finnish) was built in 1921.

The economic structure of Hämeenlinna is close to the national average. In 2015, there were 28,270 jobs in the city. Of these, 75% were in the service sector, 3% in primary production (agriculture, forestry and fisheries) and 21% in processing. The share of the unemployed was 13,6%. [11]

Largest employers (by number of employees) [12]

In the 1980s, the following dishes were named Hämeenlinna's traditional cuisine: as a daily meal, smoked ham and sourdough; as a festive meal, the herring wrapped in rye dough, i.e. "fish bread", buttermilk and beer, and the riistansylttääjän lintupaisti, which means pheasant stuffed almonds with potato and apple slices. [13]

Distances to other places

Hämeenlinna is twinned with: [14] 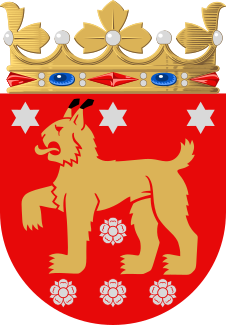 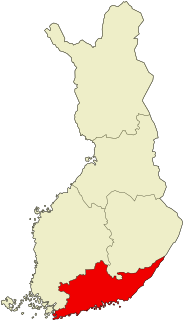 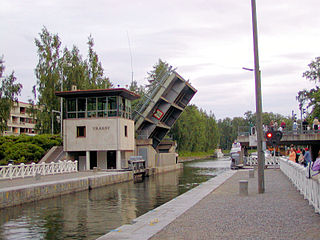 Asikkala is a municipality of Finland. Its seat is in Vääksy, at the shores of the Lake Päijänne. It is located in the province of Southern Finland and is part of the Päijänne Tavastia region.

Kanta-Häme, sometimes referred to as Tavastia Proper is a region of Finland. The region is also sometimes called the Häme region. It borders the regions of Southwest Finland, Pirkanmaa, Päijät-Häme, and Uusimaa.

Hattula is a municipality of Finland. It is part of the Tavastia Proper region and until 2010 it was located in the province of Southern Finland. Hattula is almost completely surrounded by Hämeenlinna, only in the north it shares the border with Valkeakoski and Pälkäne on the Pirkanmaa region side.

Hauho is a former municipality of Finland. It was situated in the province of Southern Finland and is today a part of the region of Tavastia Proper.

Hausjärvi is a municipality of Finland. Its seat is in Oitti. 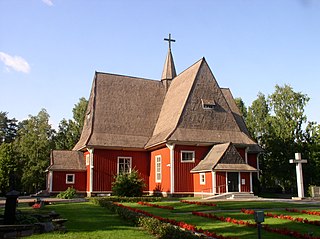 Iitti is a municipality of Finland. It seats is in Kausala.

Janakkala is a municipality of Finland. Its administrative centre is in Turenki, which is often erroneously shown on maps as being "Janakkala". Janakkala is located along the Highway 3 (E12) in the province of Southern Finland and is part of the Tavastia Proper region. To the south, Janakkala shares a boundary with Riihimäki, the Northern neighbour being Hämeenlinna. It is 16 kilometres (9.9 mi) from Turenki to Hämeenlinna, 94 kilometres (58 mi) to Tampere and 96 kilometres (60 mi) to Helsinki. 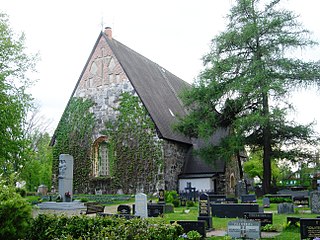 Lammi is a former municipality of Finland. It was consolidated with Hämeenlinna on 2009-01-01.

Tavastians are a historic people and a modern subgroup (heimo) of the Finnish people. They live in areas of the historical province of Tavastia (Häme) and speak Tavastian dialects.

Tavastia Castle or Häme Castle is a medieval castle in Tavastia Proper, Finland. It is located in Hämeenlinna, the city between Helsinki and Tampere. Originally located on an island, the castle now sits on the coast of lake Vanajavesi. The castle consists of a central keep and surrounding curtain walls, enclosed by a moat. The keep originally had five turrets, but only two are apparent today. The curtain wall has a gatehouse, battlements, an octagonal brick corner turret, and a round gun turret. The lower tiers of the keep and curtain wall are of masoned granite and the upper tiers are red brickwork.

Vanaja is a former municipality of Finland. It was located in Tavastia Proper about 100 kilometres (60 mi) north of Helsinki. It is also speculated that it might have been the name for an Iron Age and early Middle Ages settlement found opposite to the Häme Castle.

Finnish national road 3 is a highway in Finland between Helsinki and Vaasa via Hämeenlinna and Tampere. The road is 424 kilometres (263 mi) long and it is part of the European route E12. 180 kilometres (110 mi) of the highway is motorway, connecting Helsinki to Tampere. North of Tampere, the road is mostly two-lane road, with a share of 2+1 road. The busiest point on Highway 3 is in Helsinki, north of the Ring I junction, where the average traffic volume is about 90,000 vehicles per day. 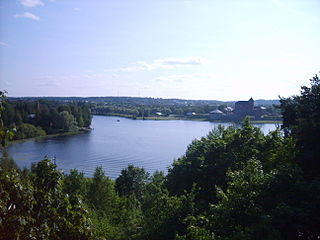 Vanajavesi is a large lake in southern Finland, in the provinces of Pirkanmaa and Kanta-Häme. It is part of the Kokemäenjoki basin. The lake gathers waters from a wide area in the regions of Pirkanmaa, Tavastia Proper and parts of the Päijänne Tavastia region. 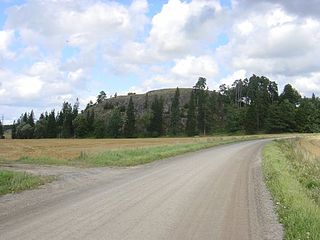 Hämeen Härkätie is an ancient road in Finland, connecting Turku in Finland Proper to Hämeenlinna in Tavastia Proper. The 162 kilometers long road has been in use at the latest in the 9th century and in many parts it has been in use since. Today, Finnish national road 10 fulfills the same purpose as the connection between Turku and Hämeenlinna, but it follows the original route only near Turku.

Sipi Antinpoika, was a Finnish Pagan practitioner, who was executed for witchcraft after having performed a Pagan ritual.