Håkan Erik Nyblom (born 26 November 1981) is a retired Greco-Roman wrestler. He and his twin brother Anders were born in Finland, but competed throughout their careers for Denmark in the 55 kg featherweight division - Håkan qualified for the 2004 and 2012 Olympics, where he placed eighth and fifth, respectively, while Anders finished 11th in 2008. [1] In 2009 Håkan won a bronze medal at the world championships, after losing to Hamid Sourian in the semifinal. [2]

At the 2004 Olympics Håkan placed second in the preliminary pool. At the 2012 Olympics, he lost to Sourian in the semifinal, and then to Péter Módos in the bronze medal bout. [1]

Carlos Alberto Borges Jayme is a former competition swimmer from Brazil. Jayme was a freestyle specialist and an Olympic bronze medalist.

Ander Elosegi Alkain is a Spanish slalom canoeist who has competed at the international level since 2003.

Park Eun-Chul is a South Korean wrestler who won the Bronze medal in the Men's Greco-Roman 55kg in the 2008 Summer Olympics in Beijing. He is also a Three-time world championship medalist, receiving Bronze in 2006, and Silver in 2005 and 2007. He lost both his world championship finals matches to Hamid Sourian. Park eventually beat Sourian in the Bronze medal match at the 2008 Summer Olympics.

Andrea Minguzzi is an Italian Greco-Roman wrestler. He won a gold medal in the 2008 Summer Olympics.

Sushil Kumar Solanki is an Indian freestyle wrestler. He was competing in the 66 kg weight division when he won the 2010 world title, a silver medal at the 2012 London Olympics and a bronze medal at the 2008 Beijing Olympics, which made him the only Indian to win two individual Olympic medals. He carried the Indian flag at the opening ceremony of 2012 London Olympics.His08 Olympic medal was second for India in wrestling, and the first since Khashaba Dadasaheb Jadhav's bronze medal at the 1952 Summer Olympics. In July 2009, he received the Rajiv Gandhi Khel Ratna – India's highest honour for sportspersons. On 3 October 2010, Kumar handed the Queen's Baton to Prince Charles in the Queen's Baton Relay for the 2010 Commonwealth Games Opening Ceremony. Sushil won the gold medal in the 74 kg division at the 2014 Commonwealth Games.

Erik Pfeifer in Asbest is a German amateur boxer who won Bronze at the 2011 World Amateur Boxing Championships.

Felipe Kitadai is a judoka from Brazil. He won a bronze medal at the 2012 Olympics and a gold at the 2011 Pan American Games. He also won gold medals six consecutive times in the Pan American Games Judo Championships: at 2011 Guadalaraja, 2012 Montreal, 2013 San José, 2014 Guayaquil, 2015 Edmonton and 2016 Havana.

Erik Håkan Pettersson is a retired Swedish cyclist. He was part of the road racing team of four Pettersson brothers, known as Fåglum brothers, who won the world title in 1967–1969 and a silver medal at the 1968 Olympics; three of the brothers were also part of the bronze-winning road team at the 1964 Games. In 1967 they were awarded the Svenska Dagbladet Gold Medal.

Anders Nyblom is a Danish amateur Greco-Roman wrestler, who competed in the featherweight division. He is the twin brother of two-time Olympian Håkan Nyblom.

Kohei Hasegawa is an amateur Japanese Greco-Roman wrestler, who competed in the men's featherweight category. He won two gold medals in his division at the 2009 Asian Wrestling Championships in Pattaya, Thailand, and at the 2010 Asian Games in Guangzhou, China, defeating India's Jogender Singh and pinning Kyrgyzstan's Kanybek Zholchubekov, respectively. Hasegawa is also a member of the wrestling team for Fukuichi Gyogyo Co. Ltd., and is coached and trained by Hiroshi Ohta. 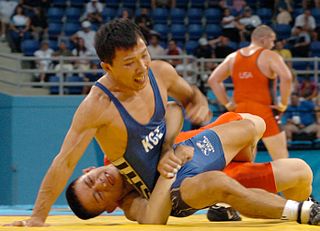 Uran Kalilov is a Kyrgyz former amateur Greco-Roman wrestler, who competed in the men's featherweight category. He represented his nation Kyrgyzstan in two editions of the Olympic Games and also captured two silver medals each in the 54 and 55-kg division at the 2001 Asian Wrestling Championships in Ulaanbaatar, Mongolia and at the 2002 Asian Games in Busan, South Korea. Kalilov also trained throughout his sporting career for Ryon Wrestling Club in Bishkek under his father and personal coach Yusup Kalilov.