Håvard Flo (born 4 April 1970) is a Norwegian former football player. [1] He played as a forward for Stryn TIL and Sogndal Fotball, before he left Norway in 1994 and played for AGF, SV Werder Bremen, and Wolverhampton Wanderers F.C. He returned to Sogndal in 2001. He made a comeback for Sogndal in 2010.

Flo was born in Flo, Stryn. His most successful spell was in AGF, where he won the Danish Cup in 1996. The same year AGF finished 2nd in the League – behind eventual champions Brøndby. AGF also won a bronzemedal in the "Flo-era". Flo is still remembered in Aarhus as one of the best AGF players ever. [2] In 2008, when Flo first announced his retirement, he returned to Aarhus for a final tribute in the half time break. [3]

He was a member of the Norwegian squad at the 1998 FIFA World Cup in which he also scored in the tie against Scotland, and is a cousin of fellow footballers Jostein Flo, Tore André Flo and Jarle Flo. Håvard Flo's nephew Per Egil Flo also plays for Sogndal. His last match was in the second leg play-off against Aalesunds FK. Sogndal lost 7–2 on aggregate, but he scored the only Sogndal goal away and got applause even from the Aalesund fans.[ citation needed ]

Flo was a large and physically strong player, who was also renowned for having a good touch, in spite of his size.[ citation needed ] 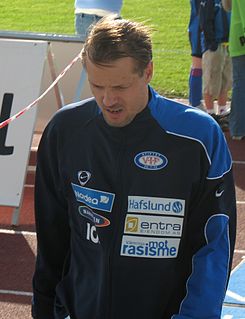 Lars Martin Jørgensen is a Danish former professional footballer played as a midfielder or defender. He is currently working as talent manager for AGF.

Lars Mads Jørgensen is a Danish former professional footballer who played as an attacking midfielder and won two Danish Superliga championships and two Danish Cup trophies with Brøndby IF. He started his career with AGF, before moving to Brøndby, and afterwards abroad to play for Italian club Ancona and Norwegian side Stabæk. He earned one cap for the Denmark national team.

Frank Pingel is a Danish former professional footballer and manager, who played as a forward.

Pierre Kanstrup is a Danish professional footballer who plays as a centre back for SønderjyskE.

Mikkel Kirkeskov Andersen is a Danish professional footballer who plays as a left back for 2. Bundesliga side Holstein Kiel.

Aron Jóhannsson is an Icelandic-American professional soccer player who plays as a striker for Ekstraklasa club Lech Poznań.

The 2015 La Manga Cup is an exhibition international club football (soccer) competition featuring football club teams from Europe, which was held in February and March 2015. All matches were played in La Manga Stadium in La Manga Club, Spain. This was the eighteenth La Manga Cup.

Fredrik Flo is a Norwegian footballer who plays for Øygarden.

Alexander Ballegaard Ammitzbøll is a Danish footballer who plays for AGF Aarhus as a forward.

The 2020 season was Aalesund's first season back in Eliteserien since their relegation at the end of the 2017 season. They finished the season bottom of the league and where relegated back to the 1. divisjon at the first opportunity.