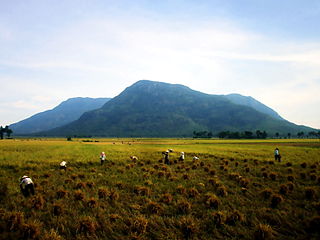 Tây Ninh is a provincial city in south-eastern Vietnam. It is the capital of Tây Ninh Province, which encompasses the town and much of the surrounding farmland. Tây Ninh is approximately 90 km to the northwest of Ho Chi Minh City, Vietnam's largest city. As of 2013, the city had a population of 153,537, and a total area of 140 km².

Cà Mau is a province of Vietnam, named after its capital city. It is located in the Mekong Delta of southern Vietnam, and is the southernmost of Vietnam's 58 provinces. It is bordered on the north by Kiên Giang and Bạc Liêu provinces, on the west by the Gulf of Thailand, and to the south and east by the South China Sea. 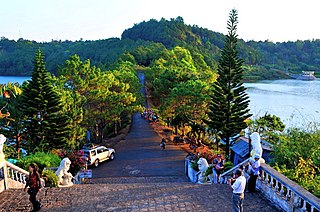 Gia Lai is a province in the Central Highlands of Vietnam. It is the second-largest province of Vietnam. The name comes from the Jarai people, one of the local indigenous groups.

Sơn La is a province in the Northwest region of Vietnam. It borders Laos to the south. The population includes Black and White Tai ethnic group.
Sơn La Dam, the largest hydroelectric power station in Southeast Asia. is located in this province. 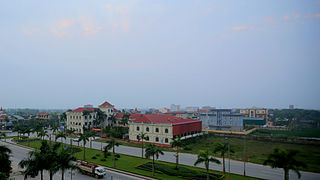 Hà Tĩnh is a city in Vietnam. It is the capital of the Hà Tĩnh Province, and lies in North Central Coast region. It is located on the National Highway 1A. The Vietnamese capital Hanoi is located 340 km north from Hà Tĩnh; 50 km north from it the city Vinh is located; Hue city is located 314 km south. Hà Tĩnh is 12.5 km away from the South China Sea. 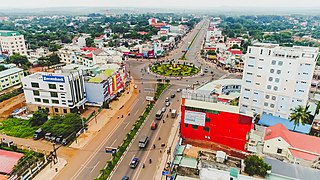 Đồng Xoài is the capital city of Bình Phước Province in the Southeast region of Vietnam. The city was the site of the 1965 Battle of Đồng Xoài during the Vietnam War. As of 2009, the district had a population of 88,380, and a total area of 168 km². The district capital lies at Đồng Xoài. 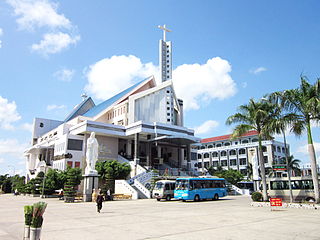 Giá Rai is a district-level town or simply town of Bạc Liêu Province in the Mekong Delta region of Vietnam. As of 2003 the town had a population of 125,690. The district covers an area of 348 km². The district capital lies at Giá Rai. 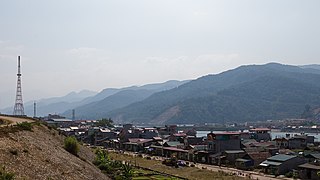 Mường Lay is a town of Điện Biên Province in the Northwest region of Vietnam.

Hữu Lũng is a rural district of Lạng Sơn Province in the Northeast region of Vietnam.

Vĩnh Lộc is a rural district of Thanh Hóa Province in the North Central Coast region of Vietnam. As of 2003 the district had a population of 87,219. The district covers an area of 157 km². The district capital lies at Vĩnh Lộc. The village is famous for the Citadel of the Hồ, a short-lived Vietnamese Dynasty (1400-1407), Hồ Quy, the founder of the Dynasty, having built the Citadel in 1397 and moved the capital there in 1401. Since 2011, the Citadel is listed by UNESCO as a World Heritage site. 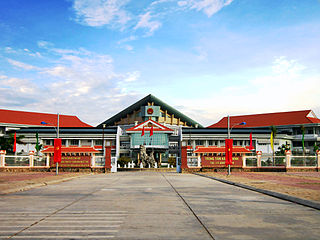 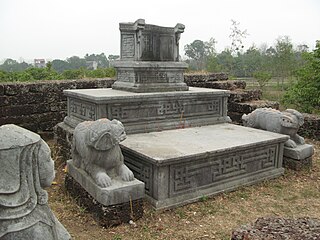 A commune is a type of third tier subdivision of Vietnam. It is divided into 11,162 units along with wards and townships, which have an equal status.

Cốông is a Loloish language of Vietnam. It is spoken by approximately 1,500 speakers in Mường Tè District, Lai Châu Province, Vietnam. It is related to but quite distinct from Phunoi.

Sila is a Loloish language spoken by 2,000 people in Laos and Vietnam. Sila speakers are an officially recognized group in Vietnam, where they are known as the Si La.

Districts, also known as rural districts, are one of several types of second-tier administrative subdivisions of Vietnam, the other types being urban districts (quận), provincial cities, and district-level towns. The districts are subdivisions of the first-tier divisions, namely the provinces and municipalities. Districts are subdivided into third-tier units, namely townships and communes.

Cầu Gồ is one of two towns in Yên Thế District, Bắc Giang Province, in northeastern Vietnam. It is also the capital town in Yên Thế and known as the place where the rebellion of Hoàng Hoa Thám began.