Savalou is a city located in the Collines Department of Benin. The commune covers an area of 2,674 square kilometres and as of 2012 had a population of 35,433 people. It is the birthplace of Olympic Beninese hurdler Odile Ahouanwanou.

Overschie is a neighborhood of Rotterdam, Netherlands, formerly a separate village with its own municipality.

Navalacruz is a municipality located in the province of Ávila, Castile and León, Spain. According to the 2006 census (INE), the municipality has a population of 264 inhabitants.

Hậu Lộc is a district (huyện) of Thanh Hóa Province in the North Central Coast region of Vietnam. As of 2003 the district had a population of 183,852. The district covers an area of 141 km2. The district capital lies at Hậu Lộc.

Rumunki Likieckie is a village in the administrative district of Gmina Rogowo, within Rypin County, Kuyavian-Pomeranian Voivodeship, in north-central Poland. It lies approximately 15 kilometres (9 mi) south of Rypin and 56 km (35 mi) east of Toruń.

Wola Pękoszewska is a village in the administrative district of Gmina Kowiesy, within Skierniewice County, Łódź Voivodeship, in central Poland. It lies approximately 5 kilometres (3 mi) north of Kowiesy, 21 km (13 mi) east of Skierniewice, and 69 km (43 mi) east of the regional capital Łódź. 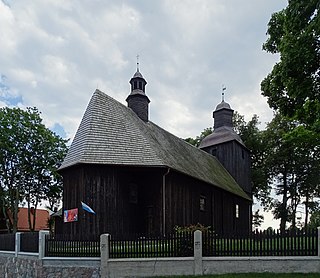 Rumian is a village in the administrative district of Gmina Rybno, within Działdowo County, Warmian-Masurian Voivodeship, in northern Poland. It lies approximately 6 kilometres (4 mi) north of Rybno, 28 km (17 mi) north-west of Działdowo, and 54 km (34 mi) south-west of the regional capital Olsztyn.

Phú Bình is a rural commune (xã) and village of the Phú Tân District of An Giang Province, Vietnam.

Hopewell is a settlement in Manchester Parish, Jamaica.

Dolni Vurpishta is a village in Dryanovo Municipality, in Gabrovo Province, in northern central Bulgaria.

Gorni Vurpishta is a village in Dryanovo Municipality, in Gabrovo Province, in northern central Bulgaria.

Grad is a village in the municipality of Brus, Serbia. According to the 2002 census, the village has a population of 97 people.

Kamnitsa is a village in Orava Parish, Põlva County, in southeastern Estonia.

Powells Valley is an unincorporated community in Dauphin County, Pennsylvania in the Harrisburg-Carlisle Metropolitan Statistical Area, the latitude is 40.433, and the longitude -76.933, its elevation is 538 feet (164 m).

Beşeylül is a village in the District of Kuyucak, Aydın Province, Turkey. As of 2010, it had a population of 462 people.

Larak was an important city of ancient Sumer. According to the Sumerian king list, "it was the third of the five cities to "exercise kingship" in the antediluvian era. The only king of Larak to be mentioned is En-sipad-zid-ana.