He was born to Daniel and Jane (Roberts) Van Voorhis in Nashport, Ohio.

His father moved to Muskingum Co., Ohio from Washington County, Pennsylvania in 1812 with his parents, and became a member of the Ohio Legislature during the Civil War.

Van Voorhis was educated at Denison University in Granville, Ohio and the University of Cincinnati Law School.

In 1873, he moved to Zanesville (county seat of Muskingum County, Ohio at the junction of the Muskingum and Licking Rivers).

In 1875, he married Mary A. Brown, daughter of Judge William A. and Margaret Brown. They had 5 children: Ada V. (married Thomas Wylie), Dollie M.A. (married Robert S. Black), LTG Daniel (who presided over the mechanization of the US Cavalry), John A., and Margaret.

When Van Voorhis moved to Zanesville, he became involved in the Republican Political Committee Organization. He was admitted to the bar in 1874. In 1892, he was nominated for 53d Congress. He served in 53rd–58th Congresses, for a total of 12 years. During that time, he was a member of the Appropriations Committee.

Muskingum County is a county located in the U.S. state of Ohio. As of the 2020 census, the population was 86,410. Its county seat is Zanesville. Nearly bisected by the Muskingum River, the county name is based on a Delaware American Indian word translated as "town by the river" or "elk's eye". 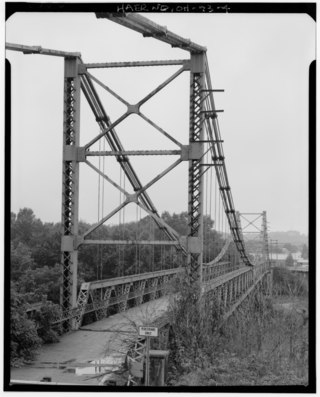 Dresden is a village in Jefferson and Cass townships in Muskingum County, Ohio, United States, along the Muskingum River at the mouth of Wakatomika Creek. It was incorporated on March 9, 1835. The population was 1,529 at the 2010 census.

Zanesville is a city in and the county seat of Muskingum County, Ohio, United States. It is located 52 miles (84 km) east of Columbus and had a population of 24,765 as of the 2020 census, down from 25,487 as of the 2010 census. Historically the state capital of Ohio from 1810 to 1812, Zanesville anchors the Zanesville micropolitan statistical area, and is part of the greater Columbus-Marion-Zanesville combined statistical area.

Ebenezer Zane was an American pioneer, soldier, politician, road builder and land speculator. Born in the Colony of Virginia, Zane established a settlement near Fort Henry which became Wheeling, on the Ohio River. He also blazed an early road through the Ohio Country to Limestone known as Zane's Trace. 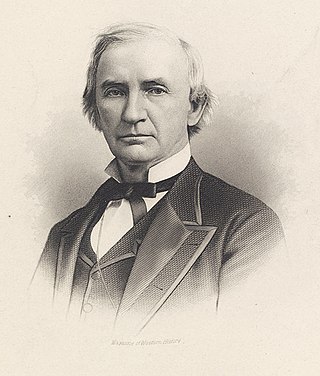 Hugh Judge Jewett was an American railroader and politician. He served as the United States representative from Ohio's 12th congressional district in the 43rd United States Congress.

Zane's Trace is a frontier road constructed under the direction of Col. Ebenezer Zane through the Northwest Territory of the United States, in what is now the state of Ohio. Many portions were based on traditional Native American trails. Constructed during 1796 and 1797, the road ran from Wheeling, Virginia to Maysville, Kentucky, through the portion of the Northwest Territory that eventually became the southeastern quarter of the state of Ohio. It was more than 230 miles (370 km) long and was interrupted by several rivers.

Isaac Van Horne was a member of the U.S. House of Representatives from Pennsylvania.

John E. Hamm, M.D. was an American US Army colonel, doctor and politician, diplomat, industrialist, and Marshall of the State of Ohio during the War of 1812.

Duncan Falls is a census-designated place in southeastern Wayne Township, Muskingum County, Ohio, United States, located on State Route 60 south of the city of Zanesville. It has a post office with the ZIP code 43734. Duncan Falls has a public library, a branch of the Muskingum County Library System.

Milton Isaiah Southard was a U.S. Representative from Ohio.

John O'Neill was an American lawyer and politician who served as a U.S. Representative from Ohio for one term from 1863 to 1865, 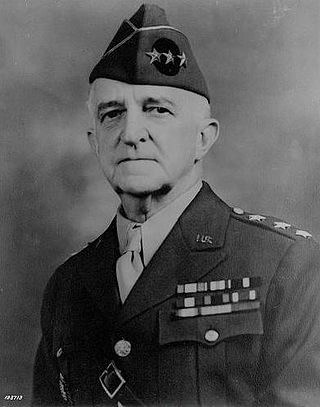 Daniel Van Voorhis was a United States Army lieutenant general and was noteworthy for his assignments as commander of V Corps and the Caribbean Defense Command, as well as his efforts in creating the Army's modern armor branch.

T.B. Townsend was a farmer and building company owner. He had one of "the most extensive and well-improved farms in" Marion County, Ohio, at the start of the 20th century, the 2,500-acre (10 km2) Rockland Farm. He was also president of T. B. Townsend Brick and Contracting Co. in Zanesville, Ohio, claimed to be the largest brick factory in Ohio at the time.

Zane's Tracts were three parcels of land in the Northwest Territory of the United States, later Ohio, that the federal government granted to Ebenezer Zane late in the 18th century, as compensation for establishing a road with ferry service over several rivers.

The James Boggs Tannehill House is a historic residence in Zanesville, Ohio, United States. Constructed in 1892, it was the home of two of Muskingum County's leading citizens in the late 19th and early 20th centuries, and it has been designated a historic site.

Samuel Sullivan was the fourth Ohio State Treasurer from 1820 to 1823. He was the first manufacturer of fine pottery in Zanesville, Ohio.

Samuel Augustus Weller, one of the pioneer pottery manufacturers of Ohio in the United States, founded the S.A. Weller Pottery in Fultonham, Ohio, in 1872. In 1882 he moved the business to Zanesville, Ohio, and for more than a half-century Weller Pottery produced both utilitarian pieces and more decorative art pottery lines.