HMS Chatham was a Royal Navy survey brig that accompanied HMS Discovery on George Vancouver's exploration of the West Coast of North America in his 1791–1795 expedition. [2] Chatham was built by King, of Dover and launched in early 1788. She was purchased for navy service on 12 February 1788.

In November 1791, while exploring the South Pacific, Broughton's crew were the first Europeans to sight the Chatham Islands, which they named after their ship. Among the other achievements of Chatham's crew was the exploration of the Columbia River as far as the Columbia River Gorge, reaching present-day eastern Multnomah County east of Portland and north west of Mount Hood. A plaque erected by the State of Oregon along Interstate 84 commemorates the spot where Broughton landed in 1792.

In 1792, while near Fife Sound in Queen Charlotte Strait, the ship ran aground on rocks within a day, and about 2 miles (3.2 km) away, from where the HMS Discovery had done the same. [1]

In November 1792 Chatham's commander was sent back to England with dispatches; Peter Puget was her commander through her return to England on 17 October 1794.

Chatham was at Plymouth on 20 January 1795 and so shared in the proceeds of the detention of the Dutch naval vessels, East Indiamen, and other merchant vessels that were in port on the outbreak of war between Britain and the Netherlands. [4]

Chatham had suffered severe wear on her long voyage, and was repaired at Deptford in 1797.

Chatham continued in Royal Navy service until 1830, when she was sold in Jamaica.

In 2008, a scuba fisherman found a 900-pound (410 kg) anchor off Whidbey Island in Washington that he and others believe was lost from HMS Chatham on 9 June 1792. Northwest historian Richard Blumenthal stated that, "They indeed found an anchor that fits the description of the anchor lost at that time". [5] In June 2014, the anchor was raised to be assessed to see if it is actually the sole remaining relic of Capt. George Vancouver’s famed 1792 voyage into Puget Sound. After conservation and testing at Texas A&M’s Center for Maritime Archaeology and Conservation, the weight of the anchor was put at 2,425 pounds (1,100 kg)—about 1,000 pounds (450 kg) heavier than anchors used in those years. An anchor weighing that much would have been used in the 1820s, not in 1792. [6] [7]

Captain George Vancouver was a British Royal Navy officer best known for his 1791–1795 expedition, which explored and charted North America's northwestern Pacific Coast regions, including the coasts of what are now the Canadian province of British Columbia as well as the US states of Alaska, Washington and Oregon. He also explored the Hawaiian Islands and the southwest coast of Australia.

HMS Sceptre was a 64-gun third-rate ship of the line of the Royal Navy, launched on 8 June 1781 at Rotherhithe. The ship was wrecked in a hurricane on 5 November 1799 in Table Bay near the Cape of Good Hope.

Archibald Menzies was a Scottish surgeon, botanist and naturalist. He spent many years at sea, serving with the Royal Navy, private merchants, and the Vancouver Expedition. He was the first recorded European to reach the summit of the Hawaiian volcano Mauna Loa and introduced the Monkey Puzzle tree to England.

John Meares was an English navigator, explorer, and maritime fur trader, best known for his role in the Nootka Crisis, which brought Britain and Spain to the brink of war.

Eleven ships of the Royal Navy and a reserve shore establishment of the Canadian Navy have borne the name HMS/HMCS Discovery, while ships of other branches have also used the name:

William Robert Broughton was a British naval officer in the late 18th century. As a lieutenant in the Royal Navy, he commanded HMS Chatham as part of the Vancouver Expedition, a voyage of exploration through the Pacific Ocean led by Captain George Vancouver in the early 1790s.

Peter Puget was an officer in the Royal Navy, best known for his exploration of Puget Sound.

Juan Francisco de la Bodega y Quadra was a Spanish Criollo naval officer operating in the Americas. Assigned to the Pacific coast Spanish Naval Department base at San Blas, in Viceroyalty of New Spain, he explored the Northwest Coast of North America as far north as present day Alaska. Bodega Bay in California is named for him. 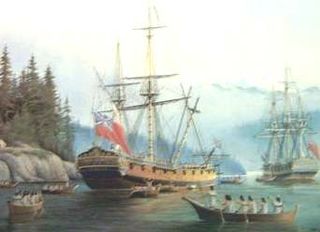 HMS Discovery was a Royal Navy ship launched in 1789 and best known as the lead ship in George Vancouver's exploration of the west coast of North America in his famous 1791-1795 expedition. She was converted to a bomb vessel in 1798 and participated in the Battle of Copenhagen. Thereafter she served as a hospital ship and later as a convict ship until 1831. She was broken up in 1834.

Dionisio Alcalá Galiano was a Spanish naval officer, cartographer, and explorer. He mapped various coastlines in Europe and the Americas with unprecedented accuracy using new technology such as chronometers. He commanded an expedition that explored and mapped the Strait of Juan de Fuca and the Strait of Georgia, and made the first European circumnavigation of Vancouver Island. He reached the rank of brigadier and died during the Battle of Trafalgar.

HMS Providence was a sloop of the Royal Navy, famous for being commanded by William Bligh on his second breadfruit voyage between 1791 and 1794.

Joseph Baker (1767–1817) was an officer in the Royal Navy, best known for his role in the mapping of the Pacific Northwest Coast of America during the Vancouver Expedition of 1791–1795. Mount Baker is named after him. 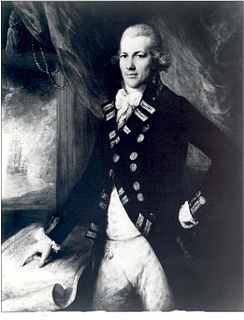 Henry Roberts (1756–1796), a native to Shoreham, Sussex, was an officer in the Royal Navy who served with Captain Cook on his last two voyages.

Joseph Whidbey FRS was a member of the Royal Navy who served on the Vancouver Expedition 1791–95, and later achieved renown as a naval engineer. He is notable for having been the first European to discover and chart Admiralty Island in the Alexander Archipelago in 1794.

The Vancouver Expedition (1791–1795) was a four-and-a-half-year voyage of exploration and diplomacy, commanded by Captain George Vancouver of the Royal Navy. The British expedition circumnavigated the globe and made contact with five continents. The expedition at various times included between two and four vessels, and up to 153 men, all but 6 of whom returned home safely.

Towereroo was the first Hawaiian to visit Europe. He returned to the Hawaiian islands on the Vancouver Expedition in 1792. Although during his time the British spelled his name "Toweroo", it would probably be Kualelo with modern Hawaiian language spelling.

Admiral Alan Gardner, 1st Baron Gardner, was a British Royal Navy officer and peer of the realm. He was regarded by some as one of the Georgian era's most dashing frigate captains and, ultimately, a respected senior admiral.

HMS Blossom was an 18-gun Cormorant-class sloop-of-war. She was built in 1806 and is best known for the 1825–1828 expedition under Captain Beechey to the Pacific Ocean. She explored as far north as Point Barrow, Alaska, the furthest point into the Arctic any non-Inuit had been at the time. She was finally broken up in 1848.

James Johnstone was a British naval officer and explorer. He is noted for having served as sailing master of the armed tender HMS Chatham and later acting lieutenant during George Vancouver's 1791–1795 expedition to the Pacific Northwest. Johnstone Strait in British Columbia is named after him.