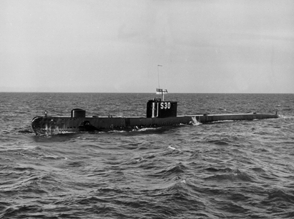 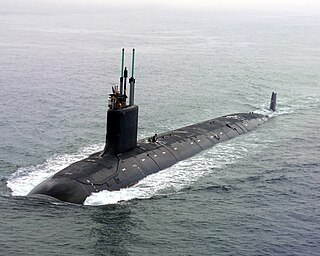 A submarine is a watercraft capable of independent operation underwater. It differs from a submersible, which has more limited underwater capability. It is also sometimes used historically or colloquially to refer to remotely operated vehicles and robots, as well as medium-sized or smaller vessels, such as the midget submarine and the wet sub. Although by definition a ship, submarine evolved as a shortened form of submarine boat and thus by naval tradition, submarines are still usually referred to as "boats" rather than as "ships", regardless of their size.

High-test peroxide (HTP) is a highly concentrated solution of hydrogen peroxide, with the remainder predominantly made up of water. In contact with a catalyst, it decomposes into a high-temperature mixture of steam and oxygen, with no remaining liquid water. It was used as a propellant of HTP rockets and torpedoes, and has been used for high-performance vernier engines.

For details of the decisions leading to their construction, and problems affecting the vessels, please refer to the article on HMS Explorer.

Both Excalibur and Explorer were assigned to the 3rd Submarine Squadron although due to their experimental nature, they tended to operate independently, accompanied by their depot ship HMS Kingfisher and a fuel carrier, RFA Spabeck. They later acted as high speed underwater targets for the Royal Navy's prototype nuclear-powered submarine HMS Dreadnought.

RFA King Salvor (A291), initially HMS King Salvor (W191), was the lead ship of a class of 12 salvage vessels of the Royal Fleet Auxiliary. A 13th ship was completed as a submarine rescue vessel for the Royal Navy as HMS Reclaim.

RFA Spabeck (A227) was a coastal water carrier of the Royal Fleet Auxiliary. 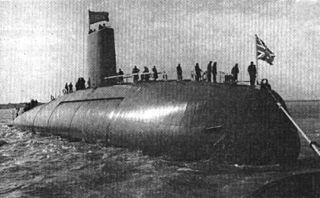 The seventh HMS Dreadnought was the United Kingdom's first nuclear-powered submarine, built by Vickers Armstrongs at Barrow-in-Furness. Launched by Queen Elizabeth II on Trafalgar Day 1960 and commissioned into service with the Royal Navy in April 1963, she continued in service until 1980. The submarine was powered by a S5W reactor, a design made available as a direct result of the 1958 US–UK Mutual Defence Agreement.

The submarine's periscope survives. It was installed in the starter's hut at the Golf House Club, the golf club at Elie and Earlsferry, Scotland; players and visitors may use it to view the golf course. [3]

Elie and Earlsferry is a coastal town and former royal burgh in Fife, and parish, Scotland, situated within the East Neuk beside Chapel Ness on the north coast of the Firth of Forth, eight miles east of Leven. The burgh comprised the linked villages of Elie and Earlsferry, which were formally merged in 1930 by the Local Government Act of 1929. To the north is the village of Kilconquhar and Loch of Kilconquhar. 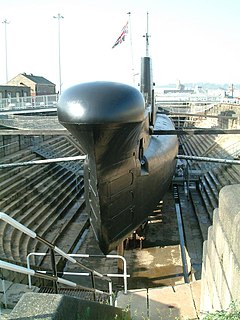 HMS Ocelot (S17) was an Oberon-class diesel-electric submarine operated by the Royal Navy.

The Valiant class were a class of nuclear-powered fleet submarines in service with the Royal Navy from the mid-1960s until 1994. They were the first fully British nuclear fleet submarine; the earlier HMS Dreadnought used an American nuclear reactor. There were only two boats in the class, the first, Valiant commissioned in 1966 three years after Dreadnought, and Warspite the following year. Both were built by Vickers at Barrow-in-Furness. 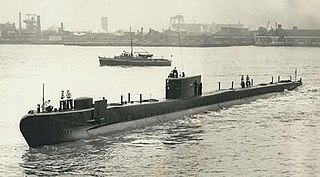 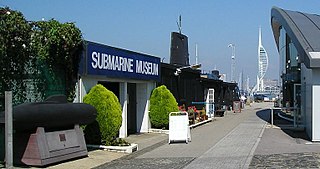 The Parthian-class submarine or P class was a class of six submarines built for the Royal Navy in the late 1920s. They were designed as long-range patrol submarines for the Far East. These boats were almost identical to the Odin class, the only difference being a different bow shape. 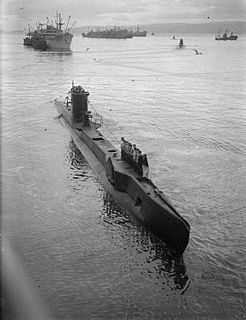 HMS D4 was a British D class submarine built by Vickers, Barrow. D4 was laid down on 24 February 1910, launched 27 April 1911 and was commissioned on 29 November 1911. She was the first submarine to be fitted with a gun for offensive use.

HMS Selene was a S-class submarine of the third batch built for the Royal Navy during World War II. She survived the war and was sold for scrap in 1961.

HMS Seneschal was a S-class submarine of the third batch built for the Royal Navy during World War II. She survived the war and was sold for scrap in 1965.

The second HMS Tarpon (N17) was a T-class submarine of the Royal Navy. She was laid down by Scotts, Greenock and launched in October 1939. She is named after the large fish Tarpon; one species of which is native to the Atlantic, and the other to the Indo-Pacific Oceans. 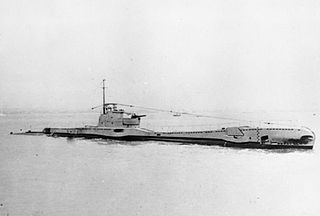 HMS Thistle (N24) was a T-class submarine of the Royal Navy. She was laid down by Vickers Armstrong, Barrow and launched in October 1938. She was sunk by the German submarine U-4 on 10 April 1940 near Skudenes.

HMS Trooper (N91) was a T-class submarine of the Royal Navy. She was laid down by Scotts, Greenock and launched in March 1942.

HMS Thule was a British submarine of the third group of the T class. She was built as P325 at Devonport Dockyard, and launched on 22 October 1942. So far she has been the only ship of the Royal Navy to bear the name Thule, after Thule, the mythological name for a northern island.

HMS Ursula was a U-class submarine, of the first group of that class constructed for the Royal Navy. The submarine entered service in 1938 and saw action during the Second World War in the North and Mediterranean Seas. In 1944, Ursula was transferred to the Soviet Navy and renamed V-4. She remained in Soviet service until 1950 when the submarine was returned to the United Kingdom and was sold for scrap in May 1950.

HMS L14 was a L-class submarine built for the Royal Navy during World War I. She was one of five boats in the class to be fitted as a minelayer. The boat survived the war and was sold for scrap in 1934.

Elie Golf Club, also known as Earlsferry Links Golf Course, is a coastal links golf club in Elie and Earlsferry, Fife, Scotland. Only about ten miles from the "spiritual home of golf" at The Royal and Ancient Golf Club of St Andrews, golf has been played here since at least 1589, when a royal charter was passed granting villagers permission to use the links. The formal club, the Elie and Earlsferry Golf Club, dates to 1832 and is one of the oldest golf clubs in the United Kingdom.

James Joseph Colledge was a British naval historian, author of Ships of the Royal Navy, the standard work on the fighting ships of the British Royal Navy from the 15th century to the 20th century.

Ships of the Royal Navy is a naval history reference work by J. J. Colledge (1908–1997); it provides brief entries on all recorded ships in commission in the Royal Navy from the 15th century, giving location of constructions, date of launch, tonnage, specification and fate.