Last updated December 15, 2020
For other ships with the same name, see HNoMS Trygg.

HNoMS Trygg (trygg is Norwegian for safe, secure, dependable) was a torpedo boat of the Royal Norwegian Navy. Her hull was built in Moss and she was finished in Horten, with build number 109. [1] Trygg had two sister ships: HNoMS Snøgg and HNoMS Stegg. Together the three vessels formed the Trygg class of torpedo boats.

At the outbreak of the Second World War, Trygg and other Norwegian warships were deployed along the Norwegian coastline to guard against neutrality violations by the warring parties. In one incident the British submarine Triad suffered technical difficulties off the Norwegian coast and was forced to enter Norwegian territorial waters near Bergen on 1 December 1939. After the submarine had been allowed to carry out rudimentary emergency repairs, Trygg escorted her out of Norwegian waters the next day. [4]

During the Norwegian Campaign Trygg was commanded by Lieutenant Frantz W. Munster and served in an air defence and escort role against the invading Germans outside Molde and Åndalsnes in April 1940 (Åndalsnes landings). After surviving numerous air attacks the ship was finally sunk at Åndalsnes 25 April 1940. [5]

As the torpedo boat was anchored up in the harbour the Luftwaffe bombers first attacked and knocked out British AA positions ashore before turning their attention towards the small Norwegian warship. A total of sixteen bombs were dropped against Trygg, one hitting the stern of the ship and passing through without exploding. The damage the bomb caused on its way through Trygg was however too much for her to stay afloat. [6] Although Munster beached his ship before the stern went under, the ship settled on her side and sank in shallow waters the next day.

German service as the Zick

The ship was salvaged by the Germans, renamed Zick, later renamed again to V.5506 Zick, and served as a Vorpostenboot on the coast of Norway until she was sunk by 21 de Havilland Mosquitos from 235 and 248 Squadrons RAF on 23 October 1944. She was escorting a three-ship convoy in Hjeltefjord near Bergen when the convoy came under attack by the rocket and autocannon firing Mosquitos. [7] [8]

All three cargo ships in the convoy suffered damage while Zick was blown apart, taking three Germans down with her. Before she was sunk Zick managed to slightly damage two of the attacking aircraft with her anti-aircraft armament. [7] 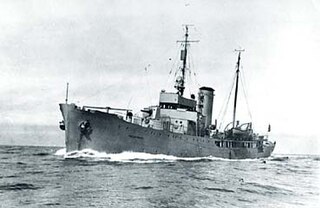 HNoMS Draug was the lead ship of the three-ship Draug class of destroyers built for the Royal Norwegian Navy in the years 1908–1913. The four-stacked destroyer was kept in service long after she was obsolete, and took part in the defence of Norway during the German invasion in 1940.

The Sleipner class was a class of six destroyers built for the Royal Norwegian Navy from 1936 until the German invasion in 1940. The design was considered advanced for its time, and it was the first class of vessels for the Norwegian Navy that used aluminium in the construction of the bridge, the mast and the outer funnel. Extra strength special steel was used in the construction of the hull. Unlike the earlier Draug class the Sleipner class had comparatively good capabilities in both main guns, anti-aircraft artillery and anti-submarine weapons. The class was named after Sleipnir, the eight-legged horse of Odin.

The minelayer HNoMS Olav Tryggvason was built by the naval shipyard at Horten in the early 1930s and had build number 119. She served in the Royal Norwegian Navy until captured by the Germans in 1940. The Germans renamed her first Albatros II, and a few days later Brummer. She was wrecked in a British bombing raid in northern Germany in April 1945. 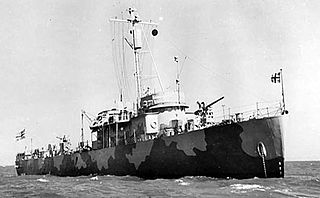 HNoMS King Haakon VII was a Royal Norwegian Navy escort ship during World War II, named after King Haakon VII of Norway. She was gifted to the RNoN by the United States on 16 September 1942, in the presence of President Franklin D. Roosevelt and Norwegian Crown Princess Märtha.

HNoMS Kjell was the final ship of twenty-seven 2nd class torpedo boats built for the Royal Norwegian Navy, launched at the Royal Norwegian Navy's shipyard in Horten on 12 March 1912 with build number 106. Kjell saw more than 32 years of service, the first 28 years in the Royal Norwegian Navy during the First World War and in the interwar period, the last four in the Kriegsmarine, having been captured in the first days of the 1940 Norwegian Campaign. After being rebuilt as a minesweeper by the Germans, she was sunk by Royal Air Force de Havilland Mosquito fighter bombers on 28 September 1944. Divers rediscovered the shipwreck in 2006.

HNoMS Æger was a Sleipner-class destroyer launched at Karljohansvern naval shipyard in Horten in 1936. The Sleipner class was part of a Norwegian rearmament scheme started as war became ever more likely in the 1930s. When the Germans invaded Norway on 9 April 1940, Æger intercepted and sank the clandestine German supply ship Roda. She was shortly afterwards attacked and sunk by German bombers, claiming two of the attacking aircraft with her anti-aircraft armament before being taken out of action by a heavy bomb.

HNoMS Sleipner was a destroyer commissioned into the Royal Norwegian Navy in 1936. The lead ship of the Sleipner class, she gained near-legendary status in Norway by enduring over two weeks of intense air attack by Luftwaffe bombers following the 9 April 1940 invasion of Norway. After the resistance in South Norway started unravelling she made her way over the North Sea to continue the fight against the Germans from exile. After serving as a convoy escort along the coast of the United Kingdom, she was decommissioned in 1944. She was recommissioned in 1948 after being converted to a frigate. Along with her surviving sister ships she was sold for scrapping in 1959.

HNoMS Odin was a Sleipner-class destroyer that entered service with the Royal Norwegian Navy in 1939. She and the other Sleipner-class vessels were built as part of a Norwegian rearmament scheme in the last years leading up to the Second World War. In 1940, she had taken part in protecting Norwegian neutrality, before being caught in the German invasion of Norway on 9 April 1940. After fighting the invasion forces at Kristiansand, she was captured and pressed into Kriegsmarine service for the duration of the war. After the end of the war, she was returned to Norway. In 1948, she and her surviving sister ships were converted to frigates and remained in service until sold for scrapping in 1959. 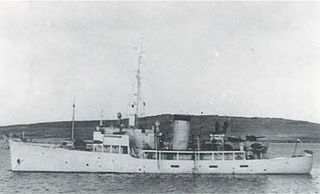 HNoMS Nordkapp was the lead ship of the Nordkapp class of fishery protection vessels. She was launched 18 August 1937 at Horten naval shipyard, with yard number 123. She had one sister ship, HNoMS Senja. Nordkapp was named after the North Cape in Finnmark. As was typical of her class, Nordkapp was very unstable in rough seas and was viewed from the beginning as a second-rate vessel. Nordkapp sailed throughout the Second World War and saw service in several theatres. 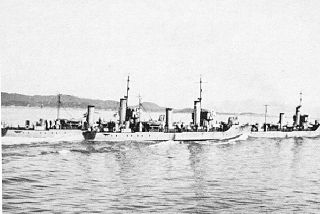 The Trygg class was the third and last class of torpedo boats to be built for the Royal Norwegian Navy. The three Trygg ships were constructed from 1919 to 1921 at Moss Verft in Moss (Trygg) and Horten naval yard. 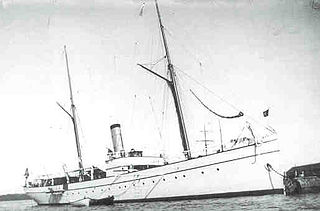 HNoMS Heimdal was a Norwegian warship built at Akers mekaniske verksted in Kristiania, Norway in 1892 with build number 137.

HNoMS Sæl was the penultimate vessel of the ten 1. class torpedo boats of the Royal Norwegian Navy. She was built at the Royal Norwegian Navy Shipyard in Horten in 1901, with yard number 85. She was to see close to 40 years service with the Royal Norwegian Navy, taking part in the preparations for war in connection with the dissolution the union with Sweden in 1905, enforcing Norwegian neutrality during the First World War and opposing the German invasion of Norway in 1940. She was lost in battle with Kriegsmarine vessels at Ånuglo in the Hardangerfjord on 18 April 1940. 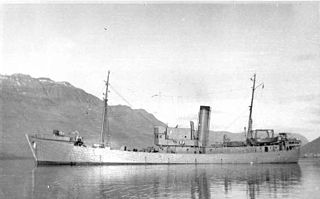 HNoMS Honningsvåg was a naval trawler that served throughout the Second World War as a patrol boat in the Royal Norwegian Navy. She was launched at the North Sea harbour of Wesermünde in Hanover, Germany in February 1940 as the fishing trawler Malangen and was captured by Norwegian militiamen at the North Norwegian port of Honningsvåg during her maiden fishing journey to the Barents Sea. Having taken part in the defence of Norway in 1940 she spent the rest of the war years patrolling the ocean off Iceland. She was decommissioned in 1946, sold to a civilian fishing company in 1947 and scrapped in 1973. 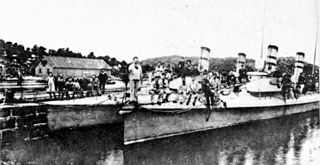 MTB 345 was an experimental motor torpedo boat constructed in 1941, which saw limited service with the Royal Navy before being transferred to the exiled Royal Norwegian Navy on 16 March 1943. She sailed with the Royal Norwegian Navy for three months in 1943, until captured by German forces on 28 July 1943, during her second mission to the coast of occupied Norway. Two days after their capture, the crew of MTB 345 were executed by the Germans based on Hitler's Commando Order. Following their capture of MTB 345, the Germans pressed the motor torpedo boat into Kriegsmarine service, renaming her SA 12. The fate of SA 12 since December 1943 is unknown. 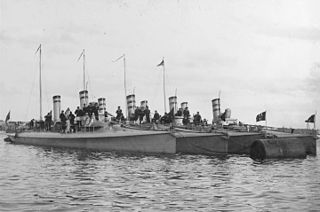 HNoMS Brand was a 1.-class torpedo boat constructed in 1898. She served the Royal Norwegian Navy for more than four decades, including neutrality protection duties during the First World War. Having once again been employed on neutrality protection duty at the outbreak of the Second World War, Brand was captured by the Germans during their invasion of Norway in April 1940.

Niels Larsen Bruun was a Norwegian officer who served in the Royal Norwegian Navy for more than four decades. Bruun took part in neutrality protection duties during the First World War, seeing service on several naval vessels and assuming his first command. He continued his service in the inter-war years, teaching at naval schools in addition to shipboard service.